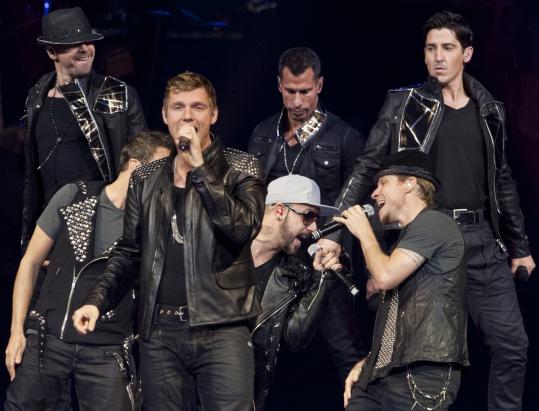 Not much has changed, really. The female screams could still crack a glass. The choreography was synchronized, sometimes in slow motion. And nearly every song was a singalong.

And if you looked past their tattoos and the wedding bands on their fingers, it was an incredible moment to behold: Long after their respective heydays, New Kids on the Block and the Backstreet Boys can still scale the heights of their boy-band glory days.

At least that was what happened last night at the TD Garden, where a sold-out crowd of more than 13,000 shrieking fans made it clear that nostalgia still sells quite well. (The show comes to Fenway Park on Saturday.)

The pairing of the two groups, which ruled the pop charts in different eras, made sense.

Not only is there overlap in their fan bases — and last night’s audience was surprisingly young — but they are also two bands whose popularity relied heavily on radio and music videos.

Collectively billed as NKOTBSB, both acts obviously relished another moment in the spotlight, and their performances were uniformly inspired. For the New Kids, who formed in Boston, the hometown pride was evident, from their banter to the Bruins jerseys they donned when they closed their set with “Hangin’ Tough.’’

There was not an ounce of fat on this show. Over two hours and 20 minutes, NKOTBSB performed more than 30 songs. With speed but also precision, they ticked off a list of hits (“Larger Than Life,’’ “Step by Step’’), ballads (“Didn’t I (Blow Your Mind This Time)’’ and “Drowning’’), and material from recent comeback albums (“Summertime,’’ “Bye Bye Love’’). Opening the show together with a melding of songs (New Kids on the Block’s “Single,’’ Backstreet Boys’ “The One’’), they then took turns with individual sets.

Songs sounded just as they did when they were hits on the radio, and the choreography for some of them even looked the same. On “You Got It (The Right Stuff),’’ the New Kids lined up and did their shuffling left-to-right dance moves that set a million teenage legs in motion in the late ’80s.

Judging from the smile on Jordan Knight’s face, the roaring fans were not the only ones having a good time revisiting the past.

Some voices have aged better than others. Knight’s loverman falsetto on “I’ll Be Loving You Forever’’ was as nimble as ever. Likewise, the clock went in reverse when Joey McIntyre opened his mouth and crooned the opening lines of “Please Don’t Go, Girl.’’

They are still banking on their sex appeal, too. When the New Kids bared their chiseled midriffs during “Summertime,’’ it was a precursor to Donnie Wahlberg ripping off his T-shirt later in the show.

Earplugs were made for such an occasion.

The two bands' legacies was particularly felt in the opening sets from Jordin Sparks and newcomer Ashlyne Huff.

Sparks, who won season six of “American Idol,’’ overcame the burden of singing to a backing track with a solid set of empowered pop.

Huff, however, seemed to be channeling the second coming of Britney Spears, not realizing that Spears herself has been attempting such a feat.

NEW KIDS ON THE BLOCK AND THE BACKSTREET BOYS
At: TD Garden, last night
(repeats Saturday at Fenway Park)