A commission to evoke ‘the other’ 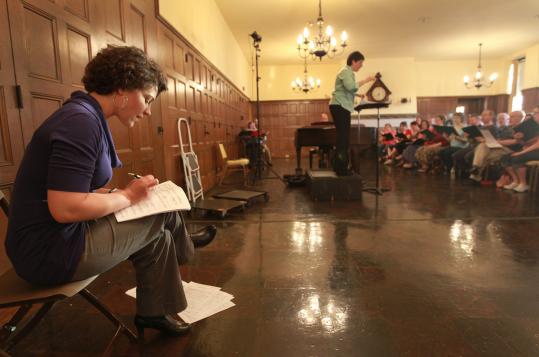 Abbie Betinis was a little giddy on the phone last week, talking about the new piece she’s written for Chorus pro Musica. More than a little giddy, actually: Having arrived in Boston earlier that day, she’d just seen a review of one of her earlier pieces in The New York Times.

“You don’t realize when you’re sitting at a piano in the middle of Minnesota that you’re going to get a New York Times review the next day,’’ she said

You can forgive Betinis her exuberance. At 31 years of age, the St. Paul-based composer has survived three bouts of Hodgkin’s lymphoma over the past 13 years. Her journey, which seems both nightmarish and oddly redemptive, left a lasting mark on the choral-orchestral work “Expectans expectavi,’’ which Chorus pro Musica will premiere in a concert on Sunday.

Betinis’s first cancer diagnosis came in 1998. She had a six-month round of chemotherapy and returned to college. Early in 2009, not long after celebrating her 10th year of being cancer-free, the same diagnosis came down again. It was a devastating blow, but she went into the next round of treatment thinking, It was something I’ve kicked before, why can’t I kick it again?

The third diagnosis, in March 2010, necessitated what her oncologist called “the nuclear option’’ — a complete bone-marrow transplant. She’s pleased by the fact that the premiere of the new piece will take place almost exactly a year after she had the procedure.

“Any cancer survivor becomes a counter,’’ she said. “You count months, you count weeks, you count how long you’ve been in remission. People can tell you to the day how long that has been. You just never know when it’s coming back. So you wake up and say, I don’t have cancer today — what am I going to do today?’’

When she was invited by Chorus pro Musica director Betsy Burleigh to write a piece that would complement Stravinsky’s “Symphony of Psalms,’’ Betinis wasn’t sure if she was strong enough to fulfill the commission. But she soon decided that an opportunity to compose a response to one of the more popular works in the choral literature was “not a commission to turn down.’’

Betinis drew her texts from Psalms 38-40, two of which (38 and 39) Stravinsky had used as well. But there was a crucial difference in the composers’ choices. “[Stravinsky] set a lot of the praising and the believing,’’ Betinis said. “And I set a lot of the blaming, the hoping, the waiting, the wondering — and no praising.’’

That darkness wove its way into the structure of the music as well. In “Expectans expectavi,’’ the chorus represents the human, and its music is generated from an eight-note scale. The orchestra’s music emerges from a different scale and represents, in her words, “the other’’ — perhaps God, perhaps something more sinister than divine. The interaction of the two musical realms produces roughness and dissonance as the two harmonic systems grind against one another.

The most purposely autobiographical element in the piece is a descending four-note motif, heard initially in the orchestra. What at first seems like an innocuous little suspension turns into a cell that, Betinis explained, infects the entire musical texture. It is a metaphor for what cancer has done to her body. Only when the chorus sings a fugue on the words “Amove a me plagas tuas’’ (“Remove your scourges from me’’) does it disappear.

The overt symbolism runs the risk of making the music the handmaiden of the concept, a risk Betinis said she was aware of while writing the piece. “You don’t want the metaphor to overtake the musicality. And I feel like I’m proud that this piece . . . I think it will carry some emotional, musical weight, even as it’s sticking to this structure.’’

Given what she’s been through, though, it must have been a nearly impossible temptation to structure the music’s internal drama the way she did. Composing “Expectans expectavi’’ has allowed her to do metaphorically what every cancer sufferer yearns to do with the physical body: identify a threat and expel it.

“It has been therapeutic for me to have a world where I can actually control the cancer, on the paper,’’ she admitted. “When is it going to come in, and who gets it, and where does it go, and how do I exterminate it in the piece? And the supremely powerful feeling of that has kind of got me on an emotional high right now.’’

One more telling detail comes at the beginning and end of the piece. In the opening, the chorus softly chants the words “Exectans expectavi Dominum’’ (“I waited patiently for the Lord’’), on a single note, like an ancient chant. The same music returns at the close of the piece, but with one difference. The word “Dominum’’ is omitted; now the speaker simply waits.