Williams wows audience with film favorites and a world premiere 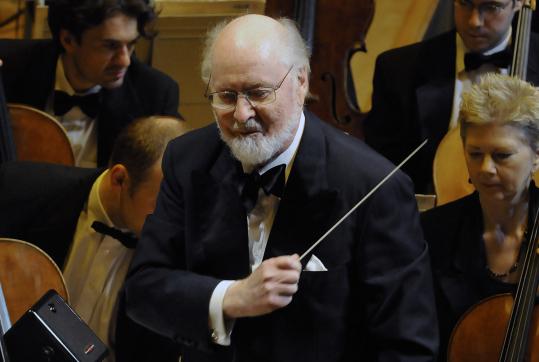 The last time John Williams appeared with the Boston Pops was last August, for Film Night at Tanglewood. So maybe it was no surprise that the program Wednesday night at Symphony Hall was Hooray for Hollywood. Together with a not-so-minor digression of the world premiere of his Concerto for Oboe, it presented Williams as both serious composer and movie-scoring rock star.

After the studious strings, probing brass, and ringing glockenspiel of the opening Jubilee 350 and an Irish-intoned suite from “Far and Away,’’ the program settled into a series of cinematic subthemes. First up was screen villains: the insistent, animalistic pull of “Jaws’’; the fluttering strings and dreamlike slowness of “Dracula’’ and “Star Wars’’ Imperial March.

Attention then turned to Williams’s Concerto for Oboe. Accompanied only by strings, Keisuke Wakao played with a light touch, even when unleashing short flurries of notes. He glided to an uncommonly graceful conclusion during the middle Pastorale movement, while the closing Commedia movement was more playful, with instruments coming from more directions and Wakao painting slightly odder shapes.

The rest of the evening served as an object lesson in the power of the movies and the music that drives them. The clips accompanying the Hollywood exoticism and unabashed drama of Max Steiner’s score for “Casablanca’’ no doubt sent more than a few audience members to their DVDs, and the simple appearance of John Belushi during Williams’s “1941’’ score received instant laughter and applause. The Audrey Hepburn tribute was so mesmerizing that music was probably playing, but who could tell?

With the exception of the red and blue light bathing the stage, there was no visual accompaniment to the unannounced encore of Williams’s “Superman’’ theme, but none was needed. The hall cheered it at the first notes.

HOORAY FOR HOLLYWOOD With John Williams

and the Boston Pops