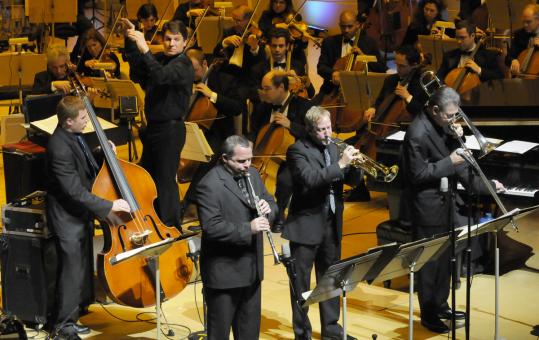 If one extrapolated the Boston Pops season to a full year, it might well be just about time for Mardi Gras, the theme of this week’s concerts from the Pops and conductor Keith Lockhart.

Mardi Gras normally marks the last day before the onset of Lent; where Christians dread the privations of that penitential season, adaptations can be found. The concert sampled such international variants, a demonstration that last-chance partying knows no borders.

The home base, not surprisingly, was New Orleans. Lockhart and the evening’s featured guests, the Dukes of Dixieland, led a pre-concert, homage-to-Bourbon-Street parade, pulling up to Symphony Hall in a newly christened duck boat. Following a frisky reading of Dvorak’s “Carnival Overture,’’ the concert shifted into gear with the “Mardi Gras’’ finale of Ferde Grofé’s “Mississippi Suite,’’ cakewalking strut given production-number polish.

It made for a rather refined carouse, more pearls than beads, but there were sly references to the party’s pre-Lenten desperation. When a sextet of Boston Conservatory musical theater students unleashed proficient razzmatazz on a food-themed medley, it was a reminder, as Lockhart noted, of Carnival’s etymological roots as a farewell to meat. And the ancestry of Gottschalk’s tarentella, after all, is a dance to stave off death.

The Dukes of Dixieland played a set touching on both tendencies, full of New Orleans favorites: “When the Saints Go Marching In,’’ “South Rampart Street Parade,’’ Allen Toussaint’s chinoiserie-garnished “Java,’’ made famous by Al Hirt.

The orchestral arrangements dressed the stylized nostalgia in its Sunday best, as it were, but there were improvisation-fueled moments — led by pianist Scott Obenschain, Meade “Lux’’ Lewis’s “Honky Tonk Train Blues’’ was especially raucous — that reached for more frantic joy, as though the clock could be turned back with sheer rhythmic energy.

Such spirited railing against the calendar is at the heart of Mardi Gras. At least traditionally, the next day brings ashes.

“Mardi Gras in May’’