Sounding the tumult, optimism of the Risorgimento 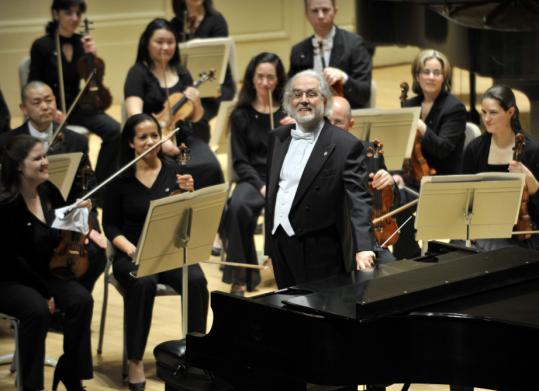 The Orchestra Sinfonica dell’Europa Unita’s “Notte Tricolore’’ at Symphony Hall on Friday opened with “The Star-Spangled Banner,’’ an apt hands-across-the-sea gesture. Founded in 2006, the OSEU specializes in historically themed concerts; this one, with the imprimatur of the Italian government and local dignitaries, commemorated the sesquicentennial of Italian unification. But, like July Fourth in the United States, 1861 marks less the accomplishment of unification — Rome, for instance, remained outside the fold for nearly another decade — than the birth of the event’s complex legacy.

The historical reputation of unification and its era, the Risorgimento, still circles two poles. The old-fashioned liberal Benedetto Croce, countering Fascist appropriation of the Risorgimento’s idealism, extolled it as a triumph of liberty; from a Fascist prison, the Marxist Antonio Gramsci critiqued unification as a co-opting of populist energies, spawning cycles of frustration. At the 1961 centennial, Gramscian skepticism was ascendant, and enthusiasm for official celebrations was notably tepid. As if in requital, Friday’s program kept the spotlight on Croce’s optimistic pride.

But the concert’s second half stumbled. Film composer Luis Bacalov’s 2009 “Libera Fantasia e Variazioni’’ on themes from Vincenzo Bellini’s “Norma,’’ for piano and orchestra, played like that opera’s Hollywood soundtrack: stop-and-go episodic, busy but underdeveloped, Bellini’s elegant lyricism lost amid indiscriminatingly lush trappings. An old-school virtuoso might have made shameless entertainment of it, but soloist Rossana Tomassi Golkar (also the OSEU’s artistic director) was out of sync with both conductor and score, too indulgent in her phrasing, too approximate in the part’s more athletic demands.

Nevertheless, the audience’s ovations were generous. The concert was bookended by Renato Serio’s sturdy new arrangement of the Italian national anthem, for piano and orchestra (with Serio conducting and Golkar at the keyboard, in somewhat more confident form), coupled to “The Star-Spangled Banner,’’ encored at the close. “Stringiamci a coorte,’’ Giovanni Mameli’s hymn exhorts: Let us join in one corps. In a similar spirit, the concert’s emcee, Ron Della Chiesa, mused that “Tonight, everyone is Italian.’’ That was unity enough to sustain the evening.

Matthew Guerrieri can be reached at matt hewguerrieri@gmail.com.