Aiming to strike the right chord with young listeners 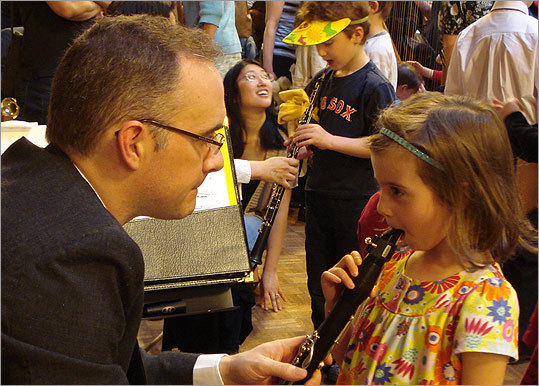 Getting kids interested in classical music is a hands-on job. Kids’ hands on instruments, that is.

This afternoon the New Philharmonia Orchestra welcomes children and adults to its third and final Family Discovery Concert of the season, focusing on wind instruments. After the concert comes another installment of the orchestra’s popular instrument petting zoo, where children from the audience are invited to blow the horns, bang the drums, and test the musicians on their kid conversation skills.

“This is hugely successful. It often goes on for as long as the concert went on,’’ said Adrienne Hartzell, executive director of the orchestra. “That is up to an hour of people staying with their kids — often the parents want to try the instruments too — trying out the string instruments, the French horn, the oboe, the trumpet. Play the timpani, play the bass drum.

“It gives the kids a chance to actually make the sounds. That has been a compelling part of our program over the years,’’ Hartzell said. “They love this. I get calls from parents saying, ‘When is the next instrument petting zoo?’ ’’

“Music for all’’ is the motto of the 75-member nonprofessional regional orchestra based in Newton. Performances aimed at kids have been part of the orchestra’s schedule since its founding in 1995.

“We need to help to keep classical music alive by making music experiences available and accessible to young kids in their formative years. Arts are getting cut back in the schools . . . and there are fewer and fewer chances for kids to discover what live classical music is all about,’’ Hartzell said.

The New Philharmonia’s conductor, like pretty much everyone else in classical music, hopes such programs eventually turn children into adult concertgoers.

“They are our only long-term hope for future audiences,’’ said Ronald Knudsen, who is also the orchestra’s music director.

“I’ve been a member of the Boston Symphony for almost 46 years,’’ said Knudsen, a violinist. “I have seen the audiences change and become older and older. The Boston Symphony is making an effort now to attract younger people. Certain concerts have greater appeal to the high school and college age, and these are being better and better attended.’’

It’s not yet clear how the New Philharmonia’s efforts are paying off. Hartzell and Knudsen say there are kids who come to the family concerts and instrument petting zoo every time it’s held, and the parents tend to turn up in the audiences for the orchestra’s regular classical concerts. Some bring along the children then, too.

“Statistics suggest that those kids who have musical experience in their school days tend to be interested when they’re then parents, and expose their kids to classical music too,’’ Hartzell said.

For now, they are just working to keep the younger audience members focused.

“Some of them will always fidget, but I think their attention is really quite good. We try not to have too long a period on any particular item so the kids don’t get bored, and we involve them in marching around the room or singing along with us,’’ said Knudsen.

Today’s program includes excerpts from Mahler’s Fourth Symphony. Students from School of Newton, Brookline Music School, and Kim Lorimier’s Boston Suzuki flute program will help the orchestra demonstrate how the brass and woodwinds make music. There’s a segment on Japanese folk songs whose basic melodies will be familiar to all, and that will include singalongs, Knudsen said.