Teen sensation takes his success on the road 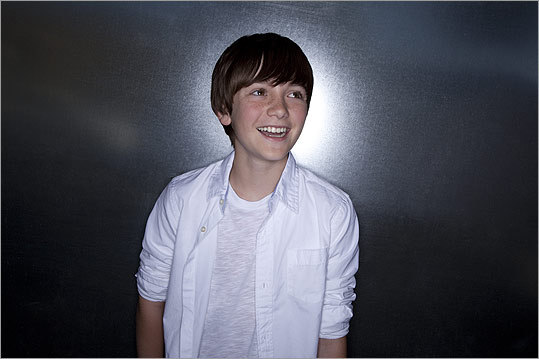 “I’m making the music I want, and we’ll just see what happens after that,’’ says 13-year-old Greyson Chance, who releases his debut album later this year.
By Sarah Rodman Globe Staff / April 10, 2011

Greyson Chance idolizes Lady Gaga, Elton John, and John Lennon. But it is a fellow singer who was thrust into stardom at a tender age with whom the 13-year-old Internet-propelled music phenom shares a philosophy. Like Michael Jackson, Chance sincerely wants to heal the world and make it a better place through his music.

On the eve of his second national tour — which includes a sold-out show with Aussie teen sensation Cody Simpson at Showcase Live on April 23 — Chance can scarcely believe that he’s gotten an opportunity to start his healing mission, all because he uploaded a video to YouTube of himself singing and playing a piano ballad version of Gaga’s hit “Paparazzi’’ just about a year ago.

“I posted the video really to just show my friends the concert,’’ says Chance over the phone as he is ferried through Los Angeles traffic. “I had no idea that anything like this would happen.’’

“This’’ includes views in the double-digit millions of his video, and a subsequent invitation to appear on Ellen DeGeneres’s talk show (to which Gaga called in with words of encouragement), which morphed into DeGeneres creating a vanity imprint to release Chance’s debut album with Maverick Records and Geffen Records. He recently completed a tour with “iCarly’’ star Miranda Cosgrove. “It’s been such a crazy journey but I’m so lucky the video did what it did.’’

When Chance releases his debut later this year, the junior high schooler from Oklahoma — who is tackling his studies online and with a tutor between work obligations — promises something relatable for all ages, in the pop-rock vein of OneRepublic and Snow Patrol. And it will be crafted by the young singer-songwriter himself, just like everything else in his budding career.

“Everybody I work with, they really understand what I’m trying to do with pop music,’’ Chance says. “I’m on my way to tour rehearsal right now and even the jeans I’m wearing, it’s what I want to be wearing. Everything I do creatively comes through me and then I go to the management team and we work it out. We understand and respect each other and we respect Greyson Chance as an artist.’’

In addition to his current single, a catchy slice of optimism called “Waiting Outside the Lines,’’ the album will include a collaboration with Nick Jonas. When the as-yet-unnamed release arrives, Chance says he won’t define its success by sales figures.

“The record would be successful to me if . . . those kids who sat down and watched the video — kept on watching it, and got on my Twitter and clicked follow and who have supported me — if they like it and this record really heals them and inspires them, then that’s a billion records to me,’’ he says. “If I can help somebody with this record who’s going through such a hard time in their life — and I hope I can do this with all my fans — that’s enough for me. If this just went completely nowhere, I would be fine with that, if I’m making the music that I wanted to be making and I’m healing people that need to be healed. That’s all it’s about for me. It would be great to sell a million records, but you know, sometimes it just doesn’t happen because this business is very rocky. But I’m making the music I want, and we’ll just see what happens after that.’’

While that may be Chance’s definition of success, he’s a savvy enough kid to realize that it may not be identical to the definition of the adults supporting and relying on him, who might like the record to arrive at a slightly more profitable destination.

“It’s a pressure but it’s a good pressure,’’ he says of commercial expectations. “I work harder and I think better when I have this pressure on me. I don’t really feel like it’s this whole big weight on my shoulders. It’s a lot of working but I’m doing what I love.’’

It can sometimes be lonely work in a world of adults, Chance readily admits of the current whirlwind of touring, recording, and promotional appearances. Like Jackson, Chance is beginning to realize he’s missing out on some stuff. He blogged during the Cosgrove tour that he wasn’t able to ride a roller coaster at a theme park in Orlando because of his packed schedule. But the preternaturally mature teen feels his parents and management team make sure that he paces himself, and he and Simpson have already resolved to try to have normal kid fun in between shows.

“We are actually going to Orlando again and we put in a date where me and him can go to Harry Potter world,’’ Chance says.