WMBR-FM celebrates 50 years on the air 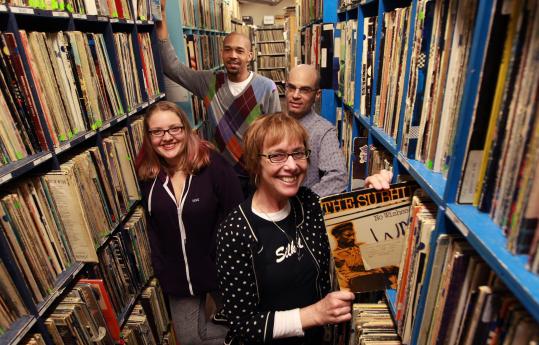 CAMBRIDGE — When legendary Boston DJ Oedipus first began spinning records in the bowels of MIT’s basement radio station WMBR-FM in 1975, nobody knew what to call the music he was playing.

“When I did this, punk rock wasn’t even called punk rock,’’ Oedipus says of his Saturday broadcast, “The Demi-Monde,’’ which would come to be recognized as the first punk rock radio show in the United States.

“I played local bands and Television and Patti Smith, and there was nowhere else to hear this stuff. The Ramones did their very first radio interview on my show — all four of them came down. This is where the music started, in many ways.’’

Oedipus, who would go on to become a DJ and program director at WBCN, nevertheless kept returning to that history-making cellar. In a sense, he’s never left. Thirty-six years after he blasted the likes of DMZ and the Dead Boys, Oedipus still sits on the overseeing board of the all-volunteer station that, this weekend, will celebrate its 50th anniversary on the FM airwaves (88.1) with two hours of special programming, starting tomorrow night at 8. The program will include on-air visits by WMBR hosts and personalities past and present, and vintage audio clips spanning five decades.

The station, which took to the airwaves April 10, 1961 as WTBS (before those call letters were sold to an Atlanta cable tycoon named Ted Turner, and replaced by WMBR — shorthand for “Walker Memorial Basement Radio’’), now broadcasts at 720 watts, rather than its paltry original 10 watts of power. But its menu of unwaveringly eclectic programming — “The Late Risers’ Club,’’ “Breakfast of Champions,’’ “Lost & Found,’’ “James Dean Death Car Experience,’’ “Pipeline!’’ (the long-standing local music program), and scores of others — continues unabated.

“The great thing about college radio is, you never quite know what you’re going to get,’’ Oedipus says. “You can experiment on college radio, you can try different things, you can be raw. And there’s something very human about that. As a listener, you get to know [the DJ], and you feel that you’re connecting with them.’’

Sue Safton has hosted the psych-rock and fuzz-guitar-centric “Aural Fixation’’ program since 1983. She regularly receives calls and e-mails from listeners who tune in or stream the station online (www.wmbr.org). “There’s nothing more rewarding when you’re a radio DJ,’’ Safton says, “than to have someone call up and say, ‘What was that thing you just played?’ ’’

Safton oversees the station’s stuffed, floor-to-ceiling library of what she estimates is more than 300,000 LPs, CDs, and 45s. “We’re working on digitizing everything,’’ she says, scanning the shelves. “But as you can imagine, it’s going to take a while.’’ Safton says she got “sucked in’’ to the station in 1979 when she volunteered answering DJ Carter Alan’s phone and thought, “this could be fun.’’ She soon picked up a midnight-to-3 a.m. weekend shift. “I got into going to see shows, buying a band’s record, playing it on the air, and figuring out how to segue things and make it sound cool,’’ says Safton. Those activities, she says cheerfully, still apply.

The same can be said for Joanie Lindstrom, 24 years after she first subbed as a “Late Risers’ Club’’ DJ, and even longer since she sat glued to her radio as a teenager in Vermont, riveted by the hard rock being carried by the distant radio signal of WAAF. These days, Lindstrom is an administrator at the Dana Farber Cancer Institute when she’s not fulfilling her duties acquiring “loud rock’’ for WMBR. “My boss cannot stand me doing this, even after all of these years,’’ Lindstrom says with a hearty laugh, flanked by a few colleagues at the station on a bustling Saturday. “But by now he’s used to it.’’

When Bruce Sylvester, folk director and host of WMBR’s “Troubadour’’ roots music program, was laid off from his job on New Year’s Eve in 1979, he asked himself a question. “I said, ‘What’s worthwhile doing?’ ’’

Sylvester had become interested in the relationship between the vintage music of the 1930s and the folk and roots scenes. WMBR, he recalls, was a perfect forum for exploring those connections. He decided he was in no hurry to get back to the 9-to-5 grind.

“Literally, you can play Perry Como and the Ramones back to back,’’ says Sylvester (who says he has). “We’re all people who are seriously dedicated to a particular genre of music. But because our goal is to be diverse, what we come away with is respecting all sorts of other genres of music. The WMBR mentality just obliterates any kind of musical self-righteousness.’’

Hip-hop authority DJ Jimizz, who hosts the Saturday night “The Choice Is Yourz,’’ began DJ-ing in high school, after his sister bought him his first pair of turntables. When the station’s hip-hop host at the time, DJ Busy Bee, caught Jimizz plying his trade and suggested he put his skills to use in a radio show, “I never took him seriously,’’ Jimizz recalls. “But I finally came down [to WMBR] and he said, ‘Press this button.’ ’’ The die was cast. DJ Jimizz officially joined the station in 1997 and has spun ever since.

“Busy Bee gave me an opportunity and I was mesmerized — it was overwhelming,’’ DJ Jimizz says. “This entire experience builds character. Everybody is granted a thing in life. If you can do something for 40 hours and not have to be compensated, then that’s what you should be doing.’’

Of course, the radio landscape has shifted radically during the last 50 — or make that five — years. The explosion and proliferation of Internet programming, with its niche listening stations and podcasts, as well as instant single-track downloads, has dramatically diminished the role that radio stations once played in how listeners’ hear new music.

“It does seem we are getting to a point where people are discovering music by letting the technology make those connections for you,’’ says “Breakfast of Champions’’ host Keith Sawyer. “And the way technology makes those connections is by saying, ‘OK, what’s really similar to this other thing?’ So rather than people thinking, ‘I can discover this for myself,’ people get programmed. If you use Pandora and plug in XTC because you love XTC, it’s going to give you the same thing over and over. You’re going to hear things that sound very, very similar to that one thing you said you liked.’’

That mindset is one that WMBR general manager Zoë Rogers hopes to change. Rogers, a 20-year-old junior biology major, is intimately familiar with the new digital world order. At 13, the Los Angeles native launched her first radio show and podcast — a precocious endeavor that garnered her coverage in Spin magazine and The New York Times. Rogers claims she went to MIT because WMBR was here.

“One thing we do have trouble with is that people who go to the school don’t know ’MBR,’’ says Rogers. “Boston loves WMBR. MIT doesn’t know that it exists. One of my biggest [goals] is to be more visible on campus, because I think it’s a great tool for opening up people’s perspectives. You can find world music, you can find indie-rock, you can find punk rock, you can find Top 40. You just don’t get that anywhere else. It’s the best place to be on earth.’’

Scenes from the station's
50 years on the air

A look back at five decades of broadcasting from MIT.