Trailblazers, and now with imitators 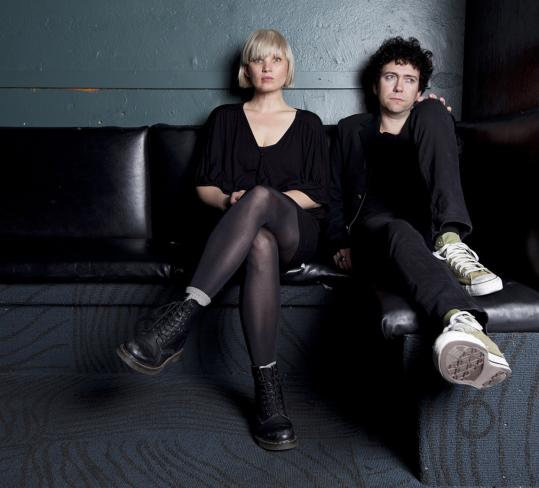 Sune Rose Wagner still remembers the night he came up with the idea for the Raveonettes, the Danish indie-rock duo he fronts with Sharin Foo.

“I was in Los Angeles at the time visiting a friend, and we would go out every night to see bands,’’ Wagner says backstage at the Paradise Rock Club last week, before their show that evening. “And not one single night did we find anything we liked. It was inspiring enough for me to say, ‘I want to make a band that plays good music.’ ’’

Wagner made a list of the bands he wanted his own to emulate: the B-52s, the Cramps, Buddy Holly, Santo & Johnny, the Everly Brothers, Sonic Youth, Suicide, and the Velvet Underground.

It was a wide range of influences, stretching from the 1950s to the ’80s, but somehow the Raveonettes have crafted a consistent catalog indebted to all of them. Nearly a decade since the release of their 2002 debut EP, “Whip It On,’’ Wagner and Foo have been faithful to their original vision, right up to their new album released today.

“Raven in the Grave’’ is among the Raveonettes’ most haunting albums, moody and sparse in a way that lets the songs caress instead of attack. It’s the first album the band has recorded in its own studio in New York, and Wagner and Foo obviously relished the experience of making it on their own terms.

“I think it’s a very different album from what we’ve done, everything about it,’’ says Wagner. “We just made it the two of us, which is really what we should always do. We didn’t really care about anyone’s opinion. It was just whatever we thought was great.’’

“We have a tendency to get a little restless,’’ adds Foo, sitting across from Wagner at the Paradise in her signature look: black attire and platinum-blond bangs hanging an inch from her eyelids. “We do a record one specific way, and then the next record we do it a different way. I feel like we’ve always had the freedom to do what we wanted to do.’’

For some bands, that autonomy would be an excuse to derail and entertain every whim and ambition. The Raveonettes did the opposite with “Raven’’; its songs are stripped-down and reflective, never so much a roar as a late-night confession. The band’s hallmarks — the crushing guitar assaults and girl-group vocals sung sweetly in unison — are intact, but the music exhales and revels in its melancholy.

“We’ve always worked with a lot of tension and juxtapositions. There’s darkness, but also a lot of romance,’’ Foo says. “I think on this record we were more brave to go down a path and really go for it.’’

The album’s back-to-basics simplicity and directness mark a departure from its predecessor, 2009’s “In and Out of Control,’’ a more pop-oriented album that Wagner now sees as a gamble for the band. “You know, you do what you do in that moment of time and then you move on to the next thing,’’ he says.

Tellingly, at the Paradise, the Raveonettes played just one song from “In and Out of Control,’’ but Foo comes to its defense: “I feel like it’s a really great record. It’s just not very Raveonettes.’’

Including “Raven,’’ the Raveonettes have released five full-length albums, each one proving just how masterful they are at making dark-hearted music that strikes a balance between beauty and brute force. And they were far ahead of the current crop of artists, from Best Coast to Dum Dum Girls, revisiting the same bands that initially inspired Wagner to form the Raveonettes.

“When we started out, no one was really doing any girl-group stuff. It wasn’t until two years ago that bands started popping up and had the same influences,’’ Wagner says. “They all list us as one of their main influences. I think it’s very flattering. We took a lot of things from other people, and now people are taking stuff from us. It’s passing on the torch.’’