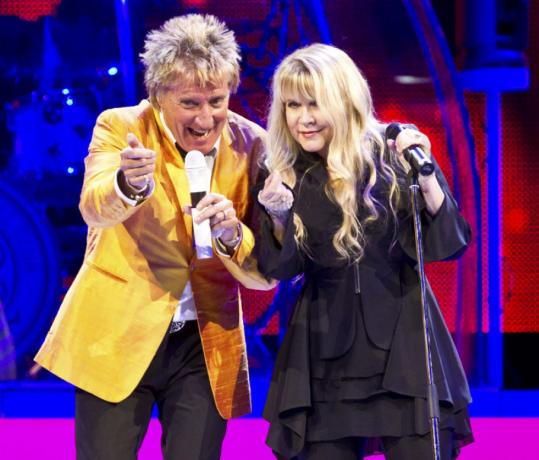 Rod Stewart and Stevie Nicks teamed up to sing two of his songs, “Passion’’ and “Young Turks,’’ last night during their show at TD Garden. (Aram Boghosian for The Boston Globe)
By Sarah Rodman Globe Staff / March 31, 2011

Rod Stewart’s daughters may love Stevie Nicks and that is why he headed out on tour with her. But it would seem that the enduringly cheeky Brit and the high priestess of Fleetwood Mac overestimated just how much overlap there actually is in their respective audiences outside of his immediate family.

Last night at the TD Garden, there were definite pockets of diehard Stevie-mania in the crowd of 13,000-plus and an overall appreciation for her well-known hits. But from ovations to singalongs to basic energy level it was clearly Stewart’s audience. (That it was Stewart’s playpen was also implicit in his more lavish, sleek white bandstand and stage production and longer set, 95 minutes versus her 75.)

While their temperaments differ — he is a mobile strutter with an affinity for charmingly cornball tail-feather shaking, natty jackets, and bright colors, while she prefers to twirl and vogue in gossamer lace shawls under a flattering gold shimmer — for those in the crowd who were fans of both artists it was a hits-packed night of crystal visions and reasons to believe.

At 66, Stewart retains all his rakish charm, most of his soulful rasp, and a clear joy in performing.

It didn’t matter the vintage or relative quality of the song he was performing from his repertoire — or those he borrowed from others — he was determined to have a good time. And he did, flitting gaily through a vibrant set that included Sam Cooke’s classic “Having a Party,’’ his own plucky ’80s hit “Some Guys Have All the Luck,’’ the wheedling roots rock of “Reason to Believe,’’ and the acoustic lace and fineness of the night’s big singalong “You’re In My Heart (The Final Acclaim).’’

Only an ill-fitting duet interlude of “Passion’’ and “Young Turks’’ with Nicks felt like a misfire. (Why they wouldn’t sing the obvious choice here of “Leather and Lace,’’ remains a mystery.)

Nicks’s set started off fine, if a bit sluggish, as she worked her way through both solo and Fleetwood Mac numbers including “Stand Back’’ and “Dreams’’ and debuted a new song “Secret Love.’’