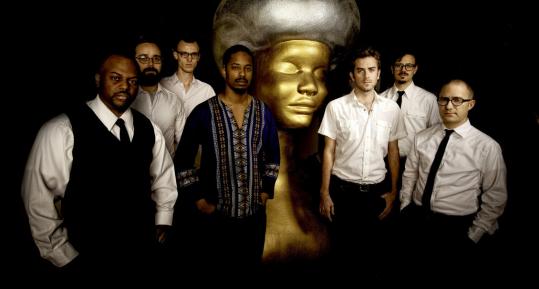 Black Joe Lewis & the Honeybears hit upon their moniker one day when a band member picked up a discarded, crusty, bear-shaped bottle of honey from the floor of the septet’s self-described “filthy’’ rehearsal space.

“A lot of people think it’s a stupid name, but at least nobody else has it . . . that I know of anyways,’’ says Lewis with a laugh on the phone from Austin, Texas.

Stupid or not, somewhere in that image is contained an apt description of the kind of exuberant racket the band makes on its recently released album “Scandalous.’’ All of the sticky detritus of living life — the joy and sweetness, the darkness and grit — is wrapped up in the group’s agreeably greasy melding of classic R&B, ’70s punk rock, and sweaty blues and funk and expelled in the spine-tingling shout of frontman Lewis.

“I always tell people that we play the type of music that we like to listen to,’’ says Lewis, of the band’s variety-pack style. And a very short list of artists that Lewis and his bandmates like to listen to would include everyone from Iggy Pop to Junior Kimbrough to the Temptations.

“We made a very conscious effort — or at least I did sonically — on this record to not go into the more soul sound,’’ says “Scandalous’’ producer Jim Eno, who also manned the boards for the group’s 2009 release between commitments to his day job as the drummer with fellow Austin rockers Spoon. “We could’ve easily gone a Sharon Jones sort of way,’’ he says. “But we felt like the influences of the band being more like the Stooges, the Dead Boys, and the Rolling Stones; we were just really thinking of incorporating the more punk element as opposed to moving toward soul with reverb and less instruments. I wanted it to be really thick.’’

And thick it is, with tales of cheating (the blues stomp “Messin’ ’’), lying (of the governmental variety on the brawny, metal-edged “You Been Lyin’ ’’), and catting around (the mostly true tale of a trip to a Nevada brothel “Mustang Ranch’’ on which Lewis extols the virtues of getting his “ham’’ both “glazed’’ and “roasted.’’)

“We just wanted to make more meaningful songs,’’ says Lewis. “On the last record, the songs weren’t really saying too much, and on this one we kind of figured out how to be better storytellers.’’ Of course, there’s also a song called “Booty City’’ — a fidgety James Brown-style gang chant number. It’s all about balance.

The band’s profile has risen incrementally over the course of the last five years and three album releases, garnering critical praise and buzz at events like South by Southwest and on the road through constant touring. But, considering that the 29-year-old Lewis didn’t even pick up a guitar and start singing until he was 20, things have moved pretty swiftly for the former computer board factory worker. (He thinks this may be a potential source for his ability to sing the blues. “It’s good if you like to complain a lot,’’ he says.)

After moving around to several different jobs — the factory, a pawn shop, driving a fish truck — Lewis was inspired by a neighbor’s band and the glamorous life they seemed to lead.

“It just never crossed my mind until that point,’’ says Lewis of his relative late bloomer status. “When I was really young I listened to hip-hop a lot and as I got older my tastes broadened, and it was like, ‘I’d like to try to do this.’ And then I was playing my guitar for fun. And then it was, ‘I want to try playing some gigs and have a band’ and so forth.’’

He admits he learned on the job, and some of those early gigs might not have been so pretty: “I sucked,’’ he says honestly.

He doesn’t anymore, as far as the band’s growing fanbase is concerned.

“You can just look at the first track on the record and the singing on that song is just leaps and bounds above the last record,’’ says Eno. “Also they’re just a tighter band from touring so long.’’

If Lewis has his way “so long’’ will stretch into forever, unlike the band that inspired him.

“They’re not around anymore. They had a good run at it,’’ says Lewis of his neighbor’s group. “I guess people got older and moved on with their lives.’’

What does he plan to do to keep that fate from befalling the Honeybears? He replies with a laugh, “By trying to make a lot of money.’’