Throwback rock powerhouse Viva Viva gets its act together 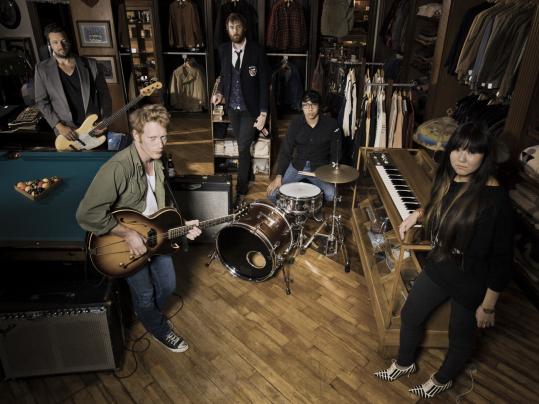 It’s a sweltering Monday evening in Austin, Texas, and with another year of the South by Southwest music festival in the books, hundreds of bands, hangovers in tow, head for home.

Boston garage-blooze rockers Viva Viva are running woefully late because, as bassist Dan Burke puts it, the band is conducting “an idiot check, making sure we don’t leave our socks or underwear or hats behind.’’ The band is staring down a 20-hour drive to the next night’s show in Nashville — one of about a half-dozen gigs the group has booked en route to Boston and a special homecoming show headlining the Brighton Music Hall on Thursday.

Despite the fatigue that inevitably sets in after logging more than 2,000 miles from Boston to Austin and playing three shows and two house parties in five days, the members of Viva Viva are in good spirits as they hurtle from Texas to Tennessee.

“It’s been a great time,’’ Burke says by cellphone as he navigates traffic with groggy guitarist Chris Warren riding shotgun (the rest of the crew and gear have hit the highway in another car). “If we were here any longer, we’d probably just relocate.’’ Even with one minor bump — Viva Viva played what Burke colorfully calls a “renegade house party situation’’ that got broken up by the cops — the trip’s been a resounding success.

“It’s tough doing anything everyday, whether you’re working in a kitchen or digging ditches,’’ Warren says. “I miss my girlfriend and I miss my bed, but other than that, I love being on the road. I’m a complicated man with simple needs. Good people, good conversation, a pack of smokes, cold beer, and a feeling of positivity, and I’m good wherever I am.’’

“The playing is what actually keeps our energy up,’’ says Burke. “If we spent too long without playing out on the road, I think that would get you tired. But as long as you’re working toward something — playing dates, being in different cities — that’ll keep you going. You can keep yourself lit on those fumes.’’

Lately, those fumes have also come in the form of riff and melody: namely, the clutch of ridiculously hooky songs on Viva Viva’s self-titled debut that, two years in the making, finally saw official release last fall after the band signed with Fort Point Recordings, a Boston label that also plans to issue a vinyl run of the record this spring.

“Viva Viva’’ offers a terrifically tasty overview of the group’s vintage-minded charms, from the T. Rex-ish glam-in-the-garage of “Keep Lookin’, Good Lookin’ ’’ and the “Hitch Hike’’-esque Tamla soul riff that opens “Dial Tone,’’ to the ventilated blues swagger of “Sympathy for the Devil’s Little Helper’’ (a spirited Stones homage, as if the tongue-in-cheek title wasn’t a dead giveaway).

Recorded by Tulsa mastermind Carter Tanton in an Allston garage during a heat wave, “Viva Viva’’ is something like the aural equivalent of an old-school Polaroid; a sonic snapshot of the band in all of its gritty, grainy glory. A little hazy and rough around the edges, perhaps, but spontaneous and artfully in the moment.

“Anytime you record, you want to try and capture what you do live, but you don’t spend a lot of time thinking about it,’’ Warren says. “You just hope for the best and try to get good takes.’’ The feel of the music is a far cry from — and at least two or three generations older than — the serrated punk racket Warren and Burke kicked up with their previous bands, Officer May and the Lot Six, respectively (the latter of which also included Viva Viva lead singer Dave Vicini).

“When I played in Officer May I was young — and every 18-year-old is [ticked] off at the world,’’ says Warren. “It was like some kind of weird, noisy therapy. But even when I was screaming my lungs out and throwing my guitar against the wall, when I got home I still listened to Neil Young and Otis Redding. I wasn’t really listening to a lot of noisy stuff. I feel like we’re now making the kind of music that I want to listen to.’’

If their name loosely translates into an emphatic declaration to live a long and robust life, one can only hope Viva Viva fulfills the promise behind the moniker. In the meantime, more music is on the way. The band’s album just went to radio, and Warren says a new EP titled “What’s the Kim Deal?’’ is in the can. There’s also a summer recording session in the offing, thanks to Converse selecting Viva Viva as one of a handful of SXSW bands awarded free studio time at a recording facility the sneaker giant is launching in Brooklyn. If this is Viva Viva’s moment, it appears to have only just begun.

“We’ve been ready to go for a while,’’ Burke says. “But until you have radio presence, until you have a record to sell and can make yourself available on a national level, I think we’ve just been biding our time. It feels like this year we came out of the incubation stage, and we’re ready to start taking people’s hearts by storm and making our mark.’’

And with that, Burke hands the phone to his bandmate riding shotgun. The road before him beckons, and he has to concentrate.