At 40, Ades is finally at ease with attention 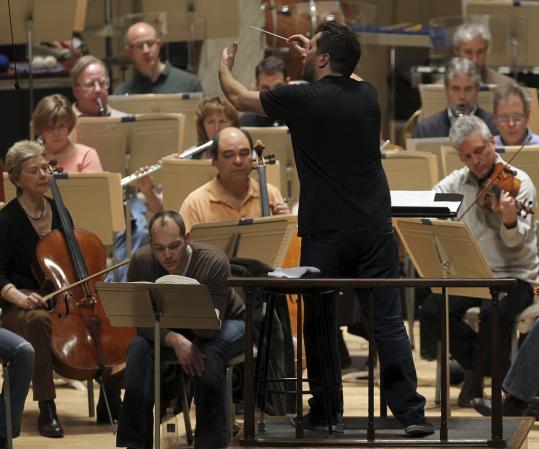 Composer-conductor Thomas Adès recently rehearsing with the BSO. Adès, who earlier this month celebrated his 40th birthday, has been under intense scrutiny since the early 1990s. (David L. Ryan/Globe Staff)
By David Weininger Globe Correspondent / March 25, 2011

The British composer Thomas Adès turned 40 at the beginning of the month, and while many approach this milestone with trepidation, he professes nothing but satisfaction.

“They say life begins at 40, and I can understand why,’’ says Adès (pronounced AH-diss), who makes his Boston Symphony debut tonight, conducting music of his own as well as works by Tchaikovsky and Sibelius. “In a way, it’s like that feeling one gets on New Year’s Day, you know — that was that and now we start again. It’s a nice feeling of all the zeros coming back in line, and you can do something new.’’

To understand Adès’s hard-won sense of contentment, it helps to know that he has been the subject of relentless critical attention that began while he was still at the University of Cambridge in the early 1990s. He was hailed as the next great British composer, on a par with Benjamin Britten, and each new work was scrutinized for signs that he was (or wasn’t) fulfilling his tremendous promise.

His 1997 orchestral work “Asyla’’ — written for Simon Rattle, a major champion — won the Grawemeyer Award, one of composition’s most prestigious prizes. A vociferous debate arose about whether his edgy, brilliantly scored creations were works of genius or flashy mediocrities. Adès tried to withdraw from the public eye, and the few interviews he gave gained him a reputation for sullenness, even arrogance.

Now, however, the wunderkind days are past, and his place as a major contemporary composer is secure. Speaking by phone from Los Angeles, where he’s overseeing a festival of his music, Adès talks freely, with bursts of nervous laughter, about his upcoming BSO concert, recent compositions, and the course of his career.

“I’d say to another young composer who’s getting that kind of attention, just keep your head down,’’ he says about his earlier days. “I did actually try to do so, because I was so nonplused by the attention — I really didn’t think I knew what I was doing at all. . . . I feel younger now than when I was 23, in a way possibly because some of the sillier end of the pressure — I’m not aware of it.’’

That Adès has, during the better part of the last decade, moved into a new phase is also clear from his music. In works such as “America: A Prophecy’’ or “Asyla’’ — which the BSO played to excellent effect under Christoph von Dohnányi in 2002 — he yoked together volatile rhythms, an astounding ear for instrumental color, dense textures, and a brooding sense of unease that refused a listener any easy sense of comfort.

In more recent works — the orchestral piece “Tevot’’ (2007) or the violin concerto “Concentric Paths’’ (2005) — there is a brighter and more cohesive feel. The color and dynamic rhythms are still there, but the once-gnarled textures are clear and the music, instead of disintegrating at the end, closes with a sense of buoyancy, even hope.

Reflecting on this evolution, Adès explains that a good deal of composing is “like finding a way through an unfamiliar building — how you get into things and out of things and you find doors from one room to another.

“And I suppose the more you work, perhaps, the better you understand the terrain. So in earlier things, one was grappling with material more from the outside, because I didn’t exactly know what these harmonies were or what they were doing. I knew they were mine but I didn’t know how they worked, in such a conscious way — as I perhaps do [now].’’

A pivotal work in his development is the opera “The Tempest,’’ scenes from which are on his BSO program. Premiered in 2004 at Covent Garden, “The Tempest’’ is Adès’s most grandly scaled work and his most public success, showing that his music could not only dazzle on first listen but encompass the weight of Shakespearean drama as well.

The play provides a theme for two other works on the BSO program. One is the prelude and first suite from Sibelius’s incidental music to “The Tempest,’’ which Adès calls the most important influence on his own setting. The other is Tchaikovsky’s symphonic poem — perhaps not the composer’s finest work but, says Adès, “a wonderful bit of 19th-century Shakespearean smoke and mirrors.’’

The final work on the program is “Concentric Paths,’’ which will be played by its dedicatee, Anthony Marwood, whom the composer affectionately describes as “my violinist.’’ The concerto’s solo part is a reminder of one near-constant in Adès’s music: the tremendous demands it makes on performers. The part of Ariel in “The Tempest’’ is written for a coloratura soprano who has 17 high E’s in her opening stretch of music. When Rattle first saw the score for “Asyla,’’ his response was “Tom, I really don’t think this will work.’’

Adès himself mentions the piece “Traced Overhead,’’ which he wrote for the British pianist Imogen Cooper. “She ran into Simon the day she’d had the score delivered. He looked at it and said, ‘Can I buy you a drink?’ ’’

He laughs while recalling this, yet a serious point lurks beneath. When he wrote Ariel’s part in “The Tempest,’’ he thought, “I don’t really know if anyone can do this, but I’m completely sure that it’s what has to happen at this point. So if it’s not possible, the whole subject of ‘The Tempest’ isn’t possible for me.

“I just hope that if it comes down onto the page and I know it’s theoretically possible, then it is right,’’ he says. “And I hope to just sort of stand my ground when the time comes and to say, you know, keep going.’’

Music of Tchaikovsky, Sibelius, and Adès