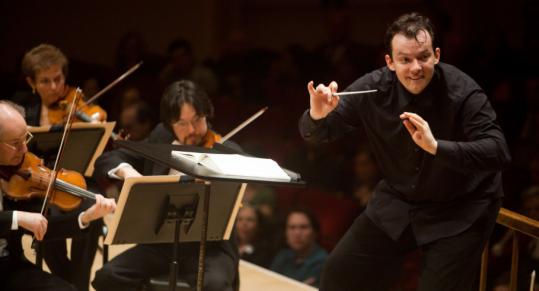 NEW YORK — Some have said that in the post-Levine era at the Boston Symphony Orchestra, every guest conductor appearance can be seen as a de facto audition for the top job. But that’s not really true, as the season has always depended on a stable of guest maestros filling out the open weeks. Not all of these guests can possibly be contenders even for a potential interim appointment.

But here is one who is — or should be: Andris Nelsons. At 32, this Latvian-born conductor has emerged as one of the most closely watched young maestros in the business. A protégé of the estimable Mariss Jansons, he is now music director of the City of Birmingham Symphony Orchestra, a post held for almost two decades by Simon Rattle, and it seems clear he is destined for even bigger things. Just over a month after his critically lauded New York Philharmonic debut, he scored a triumph on Thursday night in his BSO debut, leading the orchestra in a thoughtful and enthralling performance of Mahler’s Ninth Symphony in Carnegie Hall.

One could nitpick aspects of his interpretation, but I have rarely seen this ensemble so responsive to a debuting guest or heard it play with more commitment to his vision. The performance earned an ovation that was more than pro forma from the large New York audience. And in what is high praise from this orchestra, the BSO musicians stayed seated during one of Nelsons’s bows and joined the crowd in applauding him, shuffling feet vigorously on the stage of Carnegie Hall.

The BSO first met Nelsons on Monday of this week, when they had two rehearsals in Symphony Hall, though Nelsons unfortunately will not lead the Mahler in Boston. These rehearsals apparently went very well; afterward a longtime BSO player described Nelsons to me as one of the most exciting young conductors he had encountered. All signs pointed toward a rewarding first public meeting.

And so it was on Thursday night. On stage Nelsons is youthful but unflashy, leading with a podium technique that is far from conventional. During the Mahler he often leaned in toward the orchestra, hunching over with shoulders raised, arms and hands doing just about anything necessary to coax the sound he was looking for, whether waving a fist at the brass to muster intensity or swooping upward to cap a violin phrase in one of Mahler’s de-glossed rustic dances. But he also seemed to know when to step back and give the orchestra its space to step forward, which it did. A few spots notwithstanding, this was some of the strongest playing of the season.

The first movement was notable for the organic quality of the music-making, a sense of deep and thoughtful immersion in the musical moment at hand. The opening drifted off the stage with an air of autumnal calm, and with Nelsons conferring a gentle swaying quality on the so-called farewell theme. Climaxes were forceful but never overbearing. And most striking of all were several of Mahler’s remarkable transitional passages, in which the music seems to wander through a shadowy netherworld. These came across as hushed and searching, with Nelsons wedding mystery with textural transparency, all the while preserving the tension in the musical line.

In the two inner movements the conductor never slipped into autopilot. In matters of phrasing he was unafraid to take risks, and the orchestra — in the vigor of some of the solo playing — seemed emboldened by him. These movements brim with Mahler’s sardonic and sometimes slashing wit, qualities that some performances tend to hurl in your face. But here even Mahler at his most sarcastic was painted with poised brush strokes. In the work’s moving final adagio, Nelsons let the music build slowly and drew out some silken pianissimo playing along the way. Mahler’s soulful string chorales unfurled with a sense of both freedom and inevitability.

No one would expect from a 32-year-old conductor an interpretation of Mahler’s late masterpiece with nowhere left to grow. And it’s true that Nelsons proved more adept at capturing the score’s moments of localized magic than in projecting a larger sense of structure. And the pacing at the very end — in which a deep silence presses in and eventually claims the music as its own — can be executed with more shattering force. Yet it should also be noted that Nelsons had roughly half of the rehearsal time that would go into a typical subscription program.

Indeed, the chemistry on view Thursday night is not to be taken lightly. The BSO has in recent seasons seen a wide array of guest conductors, some of whom project what might be described as a false sense of command, leading vigorously from the podium yet too often without genuine felt contact with the orchestra. Here was the opposite phenomenon: the full partnering of conductor and ensemble in the creation of a vibrant performance.

It was sheer luck that Nelsons was available in New York this week, as he is leading Tchaikovsky’s “Queen of Spades’’ at the Met. BSO administrators should not count on luck to bring Nelsons back again. They should do so as soon as possible.