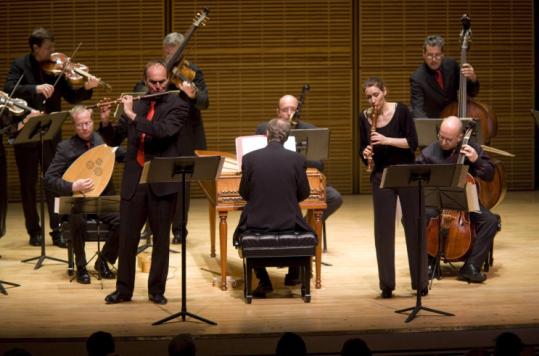 Applying that early-music cliché “re-creating the past,’’ much of the fun of the Akademie für Alte Musik Berlin’s concert at Jordan Hall on Saturday was not only the multifariousness of that past, but the range of images in which the orchestra re-created it. Its big-name survey of the German Baroque also demonstrated just how many historical vectors coalesced around that place and time (the conservative J.S. Bach in a cutting-edge mood rubbing shoulders with the cutting-edge Handel in an old-fashioned mood, for instance). The performance stylishly plundered elements from across history, an artful imagining of the era’s foreshadowings.

The evening was framed by a Baroque celebrity, Georg Philipp Telemann, and the group lavished on his music a cornucopia of approaches. The Overture in F major, a suite of dances, went from a dark, polished “Ouverture’’ to a breathless, hammered “Rondeau’’ to a Renaissance-bucolic “Passepied’’ to an ambient-frozen “Plainte’’ to a positively Brahmsian “Allemande’’ without ever losing the thread of Telemann’s populist splendor.

Concertmaster Georg Kallweit used timbral contrast to set off his solo line in Bach’s E major Violin Concerto: a dusting of grit, straight-tone accents to carry the ends of phrases through the orchestra’s response. The Adagio spread that icy sound across the full ensemble, historically informed astringency conjuring modernist bleakness. But elegant heft and lively clarity held sway in Handel’s Op. 6, No. 2 Concerto Grosso: a ravishing idyll setting up a tight session of traded motives, bouncing across the orchestra; giant-step accents in the Largo balancing offhand fleetness in the final Allegro.

Huntgeburth was joined by Anna Fusek on recorder for Telemann’s E minor Concerto for Recorder and Flute, a work that builds entire edifices out of busy, form-following-function passagework; the soloists provided limpid, percolating proficiency while the orchestra moved blocks of sound around with frictionless ease. Telemann’s Presto finale turns suddenly rustic, all drones and stomping melodies; with some judicious tambourine and ratchet to propel it along, the Akademie finished with an éclat that carried through its encore, a “Tambourin’’ from Rameau’s “Dardanus.’’ The Akademie’s Baroque was both sweet and lowdown.