The BSO faces the daunting challenge of finding a new leader 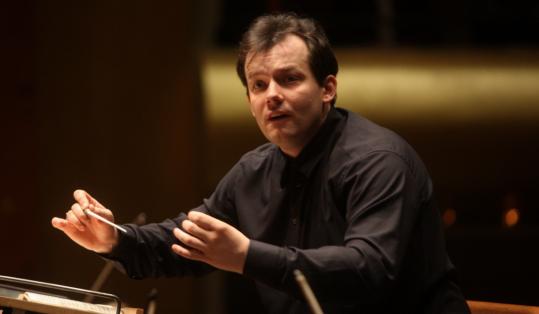 Andris Nelsons, music director of the City of Birmingham Symphony Orchestra, will lead the Boston Symphony Orchestra for the first time later this week at Carnegie Hall. (Hiroyuki Ito for The New York Times)
By Geoff Edgers Globe Staff / March 13, 2011

In 2001, the last time the Boston Symphony Orchestra needed a leader, the players were given a blank sheet of paper on which to write their choice for music director. A few called for the British master of Mahler, Simon Rattle. A handful suggested Michael Tilson Thomas, the onetime BSO assistant who had made a name for himself in San Francisco.

But the vast majority of the 100 players polled wrote the name of James Levine for the orchestra’s 14th music director.

Levine’s roller-coaster tenure ends officially in September, when the ailing maestro steps down from the BSO. And with his premature exit comes what is either being called a crisis (by outsiders) or an opportunity (by BSO officials).

Except this time, there’s no front-runner.

Horn player Jonathan Menkis, who serves as chairman of the Boston Symphony players’ committee, chuckled when told of some of the names being bandied about. Take Italian conductor Riccardo Chailly.

“He’s fantastic,’’ Menkis said of the longtime principal conductor of the London Symphony Orchestra. “And he’s not going anywhere.’’

Asked whom he would favor to replace Levine, Menkis shied away from the idea of a young leader such as Gustavo Dudamel or Robert Spano.

“I’ve been here for 27 years,’’ said Menkis. “I’ve seen the finest conductors that have come to the BSO and I have identified with a small handful of them. There aren’t any young ones yet that I’ve seen that do it for me. It’s going to be a very difficult thing.’’

Whom would he prefer? Menkis mentioned Bernard Haitink, the BSO’s principal guest conductor from 1995 to 2004, and “Lenny.’’

“I chuckle at that not because of the absurdity of it but because musicians really want to have a great artist that they know they can work with and their ensemble can grow with,’’ said Deborah Rutter, the president of the Chicago Symphony Orchestra, when told of the interest in “Lenny.’’ Chicago undertook a more than two-year search before selecting its current music director, Riccardo Muti, 69, whose own health problems have kept him off the podium in recent weeks. “We had those conversations. The person at the top of the list to be music director would be Carlos Kleiber’’ who, she noted, was already dead.

Benjamin Zander, the longtime conductor of the Boston Philharmonic Orchestra, said, “There’s just no one out there quite like Levine. So it’s a rather bleak situation and I don’t know what the answer is.’’

Zander is one of the local music lovers who longs for a different era, when conductors considered the community they were working in as much as the podium. For that reason, in part, Zander loves Mark Elder, the former English National Opera music director and current leader of the Halle Orchestra in Manchester, England. Elder is known for his outspoken nature, desire to draw more people to classical music, and his orchestra building.

Zander concedes that he has doubts Elder or Tilson Thomas would be interested in the job. He also doesn’t think that Spano, music director of the Atlanta Symphony Orchestra, or even Dudamel, the phenomenon who serves as music director of the Los Angeles Philharmonic, feel right for the BSO.

Then Zander evokes the name of another long-dead conductor, Serge Koussevitzky, who served as music director of the BSO from 1924 to 1949 and developed the symphony’s summer home at Tanglewood.

“I don’t think the Boston Symphony has had a music director in the true sense of the word since Koussevitzky,’’ said Zander. “Somebody who is the key musical figure in the town. Taking care of every aspect of the community’s musical life. [Former music director Seiji] Ozawa was not at the heart of musical life in Boston. I was introduced to him 10 times and he never knew who I was. Levine simply wasn’t here enough.’’

“I’m one of those people who longs for the days of the stay-at-home music director,’’ he said. “Somebody who does 36 weeks a season.’’

Levine’s schedule typically found him in Boston for 12 weeks, though his health problems made even that unreachable. That commitment is fairly standard in the era of the modern maestro, where it is typical to hold down two music directorships.

And while the idea of a stay-at-home-maestro might sound appealing after watching Levine struggle to juggle his time between the BSO and the Metropolitan Opera Orchestra, don’t count on it as a possibility, said Henry Fogel, the former president of the League of American Orchestras and the Chicago Symphony Orchestra.

“If you do have a conductor and, let’s say this is his only job, do you really think on the days he’s not conducting in Boston he’s going to be sitting around the house?’’

The days of Koussevitzky were different, he said.

“That all happened before the jet plane,’’ said Fogel. “So it wasn’t so easy to conduct around the world in a lot of places. It meant spending a week on a boat.’’

Fogel has no idea how long it will take the BSO to find a successor to Levine. But he’s also not concerned about time.

“It’s more important for Boston to get it right than to get it fast,’’ he said. “I guess I can make the case that given the amount of absences they had from Levine that there may be a public perception they need someone quickly. But I’m not sure that’s real. Of course, they don’t want to go four years without one, but Chicago did quite well in that period.’’

From here on out, the BSO process is straightforward. A search committee, made up of players, trustees, and management, will be in place by the end of the month. There will be discussions about conductors the BSO has played with, and talks about new faces such as Andris Nelsons, the City of Birmingham Symphony Orchestra music director who will lead the orchestra for the first time later this week at Carnegie Hall.

It’s also possible, managing director Mark Volpe said, that the BSO might bring in a principal guest conductor or composer-in-residence during the interim period.

“We’re not wedded to anything right now,’’ he said. “Everything’s on the table.’’

BSO officials, who continue to praise Levine’s musical acumen while acknowledging his physical limitations, say the maestro’s exit has not left the BSO in the lurch.

In fact, with the music director missing large chunks of time over the last four years, Volpe said the BSO had already planned to form a search committee in April. Now, they’ll create one immediately.

“It was clear Jimmy’s physical limitations were getting to be more of a challenge,’’ said Volpe. “I think he understood that. We were hoping in this time, with him on the podium, to announce a change in role and a change in title. Obviously that got preempted.’’

Volpe cautions symphony-watchers not to read too much into guest conducting spots. Those aren’t necessarily auditions. The BSO has always had a healthy slate of name-conductors coming through town. That will continue.

As for the search, many music directors have contracts and commitments stretching two and three years out. That means that even if the BSO makes a hire, the orchestra may be waiting for several years for the new maestro’s arrival. That’s what happened with Levine, hired in 2001 but not on the podium as music director until 2004.

Isaiah Jackson, the former conductor of the Pro Arte Chamber Orchestra of Boston and a teacher at the Berklee College of Music, said he’s willing to wait.

“It’s like any luxury,’’ he said. “You go to Shreve’s and they say, ‘Which diamond necklace do you want?’ You’re not going to know until the beautiful woman who gets it tries it on.’’