A lesson in style and storytelling from the Radius Ensemble 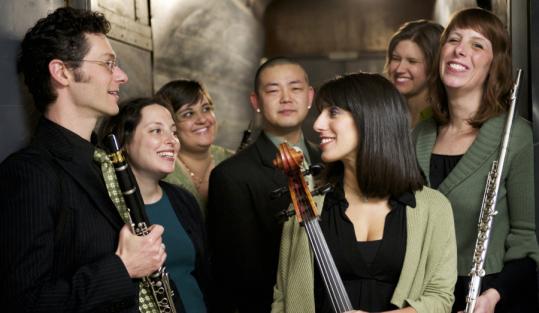 WESTON — None of the music the Radius Ensemble presented at its weekend concert was terribly shy. But alongside a varied straightforwardness was a certain coyness: Did the music have meaning on its own or only through extra-musical reference? Tiptoeing around that venerable formalist question, references of time and place invited listeners to fill in a story, even when there might not have been a story to fill in.

Take, for instance, Alan Hovhaness’s 1947 “Divertimento’’ for wind quintet. At first it’s a Renaissance costume drama: contrapuntal, modal austerity, a stream of archaic consciousness. In the middle comes a bracing, twittering “Canon in Four Keys,’’ a provocation that seems to break off mid-phrase.

One could hear it as an incursion of modernist chaos, snuffed out by ancient order — but, then again, the canon is the work’s most orderly construction, and the closest the music gets to the wit implied by the title. (Oboist Jennifer Montbach, clarinetist Eran Egozy, bassoonist Elah Grandel, and hornist Anne Howarth were particularly good in Hovhaness’s frequent dwelling on the instruments’ low registers, weaving soft sonic flannel.)

The tension between musical energy and programmatic meaning was more keen in Jennifer Higdon’s 1992 “rapidfire,’’ a flute solo intended, as the composer wrote, “to portray the violence of the cities.’’

The chase of aggressive gestures made insistent illustration, but the dexterous craft (sure cross-cutting between registers and techniques) and performance (proficient, dazzling flair from Brady) complicated the picture, the dark ferocity of the subject colliding with the natural exuberance of virtuosity.

The concert concluded with genial references, the handfuls of Bohemian spice peppering Antonín Dvorák’s G major String Quintet, op. 77. Still, Dvorák was devoted to his forms, to the extent of circling back around his landscapes with excessive thoroughness. The performance — Lee and Bolkosky joined by violinist Monica Pegis, violist Mark Berger, and bassist Susan Hagen — didn’t always alleviate that, more focused on robust moments than long trajectories. But the big, accomplished sound ensured a comfortable ride.