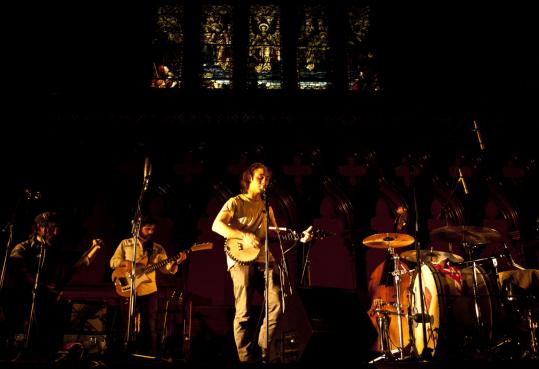 Surrounded by stained-glass windows, The Low Anthem (who like to switch instruments on stage) at the Old South Church in Boston. (Kayana Szymczak for The Boston Globe)
By Jonathan Perry Globe Correspondent / March 7, 2011

“We’re sorry for making you come to church,’’ singer and multi-instrumentalist Ben Knox Miller sheepishly told the audience that had sold-out the cavernous Old South Church on Boylston Street, and packed the pews surrounded by stained-glass windows and handsomely burnished wood. “This is the most indulgent room we’ve ever played.’’

Perhaps, but thanks to the band’s 2008’s breakthrough album, “Oh My God, Charlie Darwin,’’ and brand new disc, “Smart Flesh,’’ the venues have increasingly become as elegant, expansive, and suffused with history as the group’s songs. This is music at once spectral and earthbound, haunted by ghosts and hounded by demons — or booze (“Sally Where’d You Get Your Liquor From’’), or passion (“Apothecary Love’’), or all of the above (“Cigarettes, Whiskey and Wild Wild Women’’).

It’s a miracle they even made it here. Reportedly, after a show the previous night in Toronto, the band had been detained at the Canadian border for three hours while their merchandise was inspected and finally cleared by customs. The foursome arrived two hours before show time and went on without a sound check.

You’d never know their harried state of mind from a galvanizing 90-minute performance that was masterful and even magical at times. Credit, in part, went to the crystalline acoustics of the vast chamber, which stunningly suited the campfire circle-style hushed harmonizing of “Love and Altar’’ and “Charlie Darwin,’’ as well as the funereal rattle and shudder of “Burn,’’ which moved with the lyrical momentum of its own poetry. Harder, louder numbers like the Band-esque “Hey, All You Hippies!’’ were a welcome, blistering bolt.

Easily the evening’s most surreal moment came during “This God Damn House,’’ a song penned by ex-Anthem member Daniel Lefkowitz (who opened the show with a compelling solo set of his own). Miller instructed everyone to turn on their cellphones, and the effect — a kind of whooshing electric caw, like crying gulls flying over an ocean of shortwave radio static — made for a strangely mesmerizing flash mob of sound.

But it was ultimately the musically multitasking Low Anthem members themselves — principal singer-guitarist Miller; Jeff Prystowsky; Jocie Adams; and Mat Davidson — that brought the songs to beating life.

Anyone whose seen them knows that everybody on stage switches instruments all of the time, with Prystowsky moving from stand-up bass to drums to organ as often as Adams puts down her clarinet and picks up a trumpet or makes a singing saw quiver.

Yet the game of musical chairs was still striking to behold. The dynamic went to the temperament of these songs, and the sense of communal spirit that happens when comrades gather to converse and play their anthems, low, high, and lonesome.