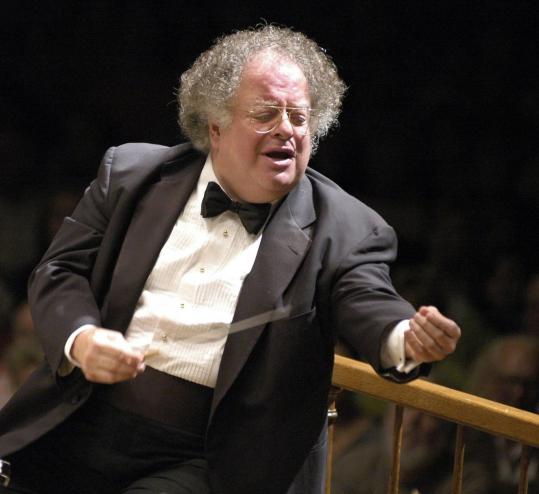 Boston Symphony Orchestra music director James Levine, whose tenure has been marked by artistic highs but long absences due to health problems, will step down from his post at the end of the orchestra’s summer season in Tanglewood, the BSO announced yesterday.

“I would have dearly loved for it not to come to this, but I must say, I can’t lose the conviction that I’m a very lucky guy really,’’ Levine said in an interview yesterday. “I just think it’s so important for the orchestra to have what it needs.’’

Levine will officially leave his post Sept. 1. The BSO said it will begin a search for his successor immediately, though managing director Mark Volpe said there is no timetable for hiring a new music director.

Levine said he knew last week, at a rehearsal of Mahler’s Ninth Symphony, that it was time to go.

“Somehow I could tell the orchestra when they looked at me, they weren’t seeing what they need,’’ he said. “And I could feel I wasn’t giving what they needed, because I was distracted by the fever and the pain. . . . I couldn’t say, ‘Oh, bear with this.’ It just wouldn’t be right.’’

He ended up withdrawing from the Mahler concerts and the remainder of his conducting duties for the season because of continuing back problems.

“It’s sad,’’ Volpe said. “He’s one of the great conductors in the world. The orchestra’s in great shape, and he’s a terrific teacher. His health issues preclude him from doing what he wanted to do.’’

There is no change in Levine’s status at New York’s Metropolitan Opera, where he serves as music director, according to general manager Peter Gelb. He is scheduled to return to the orchestra pit there March 30.

For Levine and the BSO, yesterday’s announcement marks the end of an almost four-year struggle to keep the maestro healthy enough to do his job.

“He’s been very sick,’’ Ferrillo said. “He clearly has been in a lot of pain, and the level of control that he has over his body is as bad as I’ve ever seen it.’’

Before rehearsal yesterday, Volpe told the players of Levine’s decision. Even after watching the conductor struggle recently, cellist Owen Young held out hope that Levine would recover.

“It’s a hard time,’’ Young said. “He’s one of the great, great maestros. And there’s always this optimistic sense from him, which is infectious. The news comes with sadness and with a hope that he will be able to fix these health issues and get better soon.’’

“Getting Jimmy is like getting Babe Ruth back to Boston,’’ Nicholas Zervas, the head of the BSO’s search committee, said at the time.

Over his first two seasons Levine remained strong, and critics raved about an artistic rebirth for an orchestra many felt had stagnated under his predecessor, Seiji Ozawa. Under Levine, the BSO revived its recording program, launched a European tour, and presented newly commissioned works from the American composers he championed, among them Milton Babbitt, Elliott Carter, and John Harbison.

But his physical problems began in 2006 with an onstage fall and torn rotator cuff. Levine also missed prolonged stretches with back problems and after surgery to remove a kidney with a malignant growth. Levine’s latest back surgery forced him to withdraw from 22 concerts, or 60 percent of his scheduled performances during 2009-2010, as well as eight Tanglewood concerts.

In October, Levine returned to Symphony Hall with a thundering all-Wagner program. Behind the scenes, though, Volpe said, he and Levine had already been discussing a reduced role for the future. There was a feeling that the conductor’s schedule was simply too demanding to keep up.

Levine and Volpe, though, had hoped for a smoother transition.

Levine’s latest withdrawals left the orchestra finding replacement conductors for a series of concerts between March 3 and 19 at Symphony Hall and several other venues as part of an upcoming BSO tour of the East Coast.

The upcoming series of concerts highlights the uncertainty players have had to contend with for years now, said Jonathan Menkis, a horn player who serves as chairman of the Boston Symphony players’ committee.

“Now, for instance, we have a completely different program for next week, and we have three different conductors for programs we’re bringing to New York, including a conductor this orchestra has never seen,’’ Menkis said. “Though [Andris Nelsons’] reputation is terrific, he’s going to step in and conduct the Mahler Ninth Symphony sight unseen.’’

“There’s a lot of mixed feelings here,’’ he said. “Going forward at some point with a new music director we will hopefully again have that grounding. That’s a positive. We’re losing what has been a great legacy and a partnership that has produced some really terrific moments. “

Levine’s decision to retain his Met post did not surprise many observers. But there have long been grumbles in and outside Symphony Hall about Levine’s decision to try to manage two of the highest-profile positions in the music world. In his interview, Levine said that the physical demands at the Met are less than at the BSO because the rehearsal and performance schedule is more spread out.

“There were years when Jimmy was the iron man and could reliably be trusted to do virtually anything, but I think we saw the limits to that,’’ Ortner said. “He provided a great deal of inspiration during his time here, an adventuresome repertory, and some extraordinary performances. But the BSO owes itself and its audiences a search for a music director who can truly be there full time.’’

Although his future role remains undefined, Levine said he does plan on returning to the BSO podium in the future. Volpe said Levine could be involved in creating special programming during an upcoming season or working on a project at Tanglewood. That is encouraging news to Tufts University music professor Joseph Auner, who shares Levine’s love of composer Arnold Schoenberg and said he will miss the music director’s “visionary programming.’’

“For me, I’ll miss his commitment to greatness and to exploring the most challenging music of our time in a really serious way,’’ said Auner, who has often given preconcert lectures during Levine’s time. “There’s also the performances that he was able to get from the orchestra, with very challenging music.’’

Geoff Edgers can be reached at gedgers@globe.com, Jeremy Eichler at jeichler@globe.com.

Photos: BSO conductors through the years