Back ailing; N.Y. concerts still on 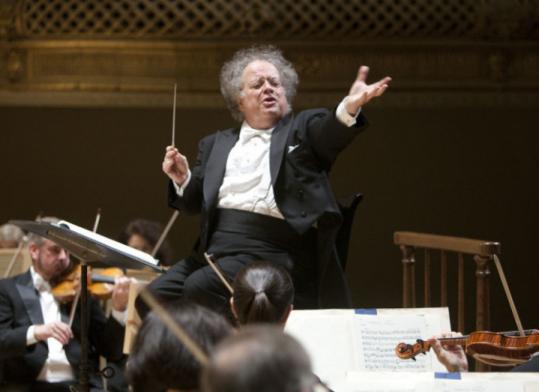 The news about James Levine was received with sympathy for his health issues but frustration for concert-goers. (Michael J. Lutch)
By Geoff Edgers Globe Staff / March 2, 2011

James Levine withdrew yesterday from his appearances for the remainder of the Boston Symphony Orchestra’s season due to lingering back problems, disappointing patrons and forcing the orchestra to scramble to find conductors for the maestro’s two remaining weeks of Boston performances and an upcoming East Coast tour.

Before last night’s concert at Symphony Hall of Mahler’s Symphony No. 9, which was conducted by assistant conductor Sean Newhouse, attendees greeted the news about Levine, 67, with a mixture of sadness for him and frustration for concert-goers.

“I thought it was a very ambitious program he set for himself this season,’’ said Rosalie Epstein, 78, a longtime subscriber from Waltham. “He’s a young person, and it’s sad that he’s had all these physical issues to deal with. It’s a big loss for the orchestra. They’re between a rock and a hard place.’’

“We are sorry he’s not conducting,’’ said Gonzalo Villagran, 36, of Brighton. “But we’re worried about him. He works too much.’’ His roommate, Pedro McDade, added, “He should only work in one place, New York or Boston,’’ to which Villagran shot back, “We prefer Boston.’’

The announcement of Levine’s withdrawal came just two days before he was to lead the orchestra in its only world premiere of the season — a BSO-commissioned violin concerto by British composer Sir Harrison Birtwistle, featuring the German violinist Christian Tetzlaff.

Levine, whose tenure has been marked by artistic highs but physical ailments that have kept him on the sideline for extended periods, was not available for comment, the BSO said. There was also no word of Levine’s plans for the summer season at Tanglewood. Last year, in a similar scenario, Levine missed more than half of the Boston Symphony’s 2009-2010 season, and then in June announced that he had not recovered enough to conduct at Tanglewood and had to cancel there as well.

Despite his latest BSO cancellations, which cover tomorrow through March 19, Levine, for now at least, is still scheduled to conduct his upcoming performances at the Metropolitan Opera in New York, which begin on March 30 with “Das Rheingold’’ and run through May 14 with “Die Walkure,’’ according to the Met’s press director, Peter E. Clark. Levine also serves as music director of the Met.

The BSO withdrawals include seven concerts at Symphony Hall, three at Carnegie Hall, and single performances at New Jersey Performing Arts Center and the Kennedy Center in Washington. Those concerts will still take place, and the BSO, which declined to comment beyond a short press release, said it would have updated program information at some point today.

“James Levine has had to withdraw from his remaining scheduled concerts of the BSO’s 2010-2011 season,’’ an e-mail from Bernadette Horgan, BSO spokeswoman, said yesterday afternoon, before listing those concerts. “We will be sending updated program information at some point [Wednesday] morning.’’

Tom Levine, Levine’s brother, said last week that the conductor’s medical issues had forced him to acknowledge he might have to scale back his work schedule to stay healthier longer. “That may very well affect his time working in Boston,’’ Tom Levine, who works closely with James, told the Globe on Friday. “I think it’s very likely that my brother’s role here, at least in terms of time, will be less in the future.’’

This is not the first time the BSO has been left to hustle for replacement conductors. But there is a growing frustration among ticket holders, many of whom have grown weary of purchasing tickets to see Levine conduct only to learn days before that he would not.

Levine took over as music director in 2004, but his health setbacks began in 2006 when he fell and tore his rotator cuff during a standing ovation at Symphony Hall. He missed most of the 2008 Tanglewood season after surgery to remove a kidney with a cancerous cyst.

Levine’s latest back surgeries forced him to miss 22 concerts, or 60 percent of his scheduled performances during 2009-2010, plus eight concerts at Tanglewood.

“These four weeks he’s now taking off to get his health in order,’’ Ronald Wilford, Levine’s manager, told The New York Times yesterday (Wilford did not return calls to the Globe). He said Levine had a procedure stemming from complications involving a nerve about 10 days ago, and needs time to recuperate. “Every time something happens, it seems to affect the Boston Symphony,’’ he said.

Last week, Levine pulled out of performances of Mahler’s Symphony No. 9 because, according to the BSO, he was having problems with his back that were complicated by a viral infection. Newhouse took over the program.

With his high-profile jobs, Levine is the highest-paid conductor in the country. He earns $1.7 million a year from the Met and just over $1.5 million from the BSO. Levine is paid “roughly less than a quarter’’ of his annual compensation for his administrative work, according to a BSO spokeswoman, with the rest in the form of concert fees. He does not receive those fees if he does not conduct.

“My heart breaks for him,’’ said Etta Davis, 60, a subscriber from Bolton. “I’m so sad that he’s suffering and can’t be with us. But I hope that no one will move too quickly to change his position with the orchestra. Because they’re a much more brilliant ensemble than they have been in 40-plus years that I’ve been hearing them.’’

Asked about Levine not canceling his Met performances, she said: “He’s got more loyalty to the Met than to us. He’s been there 40-plus years. But it doesn’t change what he’s contributed to this institution.’’

“I think it’s very sad that he injured himself and it’s a continuing problem that doesn’t get solved,’’ said Homer Stavely, 71, an occasional concert-goer from Northfield. “I was disappointed and thought maybe I shouldn’t buy a ticket. But then I thought, maybe it’s the chance for the assistant conductor to shine. After all this is how Leonard Bernstein got his foot in the door.’’

David Weininger, who writes the Classical Notes column for the Globe, and Jeremy Eichler, the Globe’s classical music critic, contributed to this story. Geoff Edgers can be reached at gedgers@globe.com.