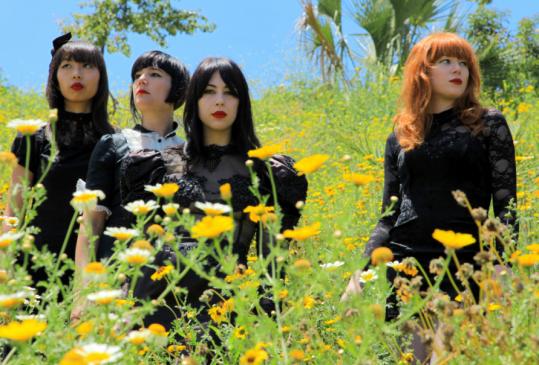 In the same breath that she mentions the Mamas & the Papas, the woman who started Dum Dum Girls also professes her love for Patti Smith, Motown, and the Jesus and Mary Chain. Dee Dee Penny — she of the cherry-red lips and Ronnie Spector’s love of eyeliner — is the lead singer and songwriter of Dum Dum Girls, an all-female rock quartet that distills the essence of those artists into a sound both tough and tender.

It turns out Dee Dee likes to skirt the line between sweet and tart; for every dulcet harmony swathed in heavy reverb, there’s a squall of distortion and fuzzed-out electric guitar to promptly bury it. That’s the aesthetic she established on Dum Dum Girls’ debut, last year’s “I Will Be,’’ and on the band’s new follow-up EP, “He Gets Me High.’’

“I love that in music, when there’s a pretty obvious contrast — upbeat songs that are actually tragic in content or vice versa,’’ says Dee Dee, who brings Dum Dum Girls to the Brighton Music Hall on Wednesday.

In the wake of Vivian Girls, Dum Dum Girls rose to prominence last year as part of a wave of garage-rock revivalists such as Girls, Frankie Rose and the Outs, and Sub Pop labelmates Male Bonding. But like fellow LA band Best Coast, Dum Dum Girls stood out for a simple distinction. Dissonance and decibels were key components, but so were strong hooks and infectious pop melodies.

Dee Dee was already familiar to fans of Grand Ole Party, an indie-rock trio that featured her on drums under her given name (Kristin Gundred). That group was short-lived, and when Dee Dee moved on, it was a headlong rush into something new and yet familiar.

“When I started Dum Dum Girls, it was documenting learning how to write songs and recording them and really having no interest in being in a band,’’ she says. “It went like this: I wrote five songs on my nylon-stringed acoustic guitar, and I realized I obviously have a love for folk music and I’m a huge Mamas & Papas fan. I could have recorded an album that sounded like that, but that’s not where my interest is right now. I wanted it to be tougher than that. So it made a lot of sense to pair the melodies and pretty harmonies with something tougher.’’

You should expect nothing less from a young woman raised in a home where the kitchen radio was always tuned to the oldies station, and her parents had great record collections she absorbed. She figures that’s probably where she discovered Sonny & Cher’s “Baby Don’t Go,’’ a sublime ’60s pop confection that Dum Dum Girls transformed into a haunted reflection on desperation, replete with ghostly reverb, high harmonies, and Dee Dee’s deadpan croon.

That cover was nearly the only lurching moment on Dum Dum Girls’ debut, which Dee Dee recorded at home before the band technically existed. If the album sounds lo-fi and amateur, it’s purely because Dee Dee didn’t know any better. That explains why she enlisted producer Richard Gottehrer, a former Brill Building songwriter (“My Boyfriend’s Back’’) who had worked with Blondie and the Go-Go’s, to fine-tune “I Will Be.’’

“I’ve always said I’m very aware of what I can do on my own, and ‘I Will Be’ is the feeling of that,’’ Dee Dee says. “I could have put out the EP the same way, but I didn’t want to do that. I wanted to make some sort of progress and that’s why I did it more live and in a studio.’’

Sure enough, the fidelity is higher on “He Gets Me High,’’ and Dee Dee’s vocals are bright and at the forefront of the mix. Further proof of her many influences, there’s a jagged cover of the Smiths’ “There Is a Light That Never Goes Out.’’

The EP’s songs were a precursor to a darker time in Dee Dee’s life. Right as the Dum Dum Girls were taking off last year, Dee Dee began grappling with her mother’s sudden battle with cancer. Shows were postponed, and her mother passed away last October. Dee Dee says it’s impossible that the experience, the first significant loss she’s ever felt, wouldn’t inform her art.

“I would say the next record will predominantly be about that experience from a variety of perspectives,’’ she says. “It may be the only way I’ve been processing. I can tell you the songs are relatively death-oriented.’’

Dee Dee’s mother, by the way, will live on through Dum Dum Girls’ albums. Old photos of her grace the covers of “I Will Be’’ and the band’s first 12-inch single, ensuring a tiny bit of visual legacy for her mother, even though “she thought it was a weird picture,’’ Dee Dee says of the debut.

That album cover was part of Dum Dum Girls’ flair for style and image. Fair or not, much of the band’s initial attention focused on the band’s all-female dynamic, a distinction Dee Dee admits is both annoying and unavoidable.

“For me, it was a personal choice. It was a way to replicate the recordings I was doing, and it was a way to play music that I had never played before,’’ she says. “I worshiped Patti Smith, but when I saw footage of the Bangles, I was like, ‘Holy [expletive], I can do that. I wanna do that. It was my intention to see what it was like and encourage other girls to play music.’’

With MINKS and Dirty Beaches