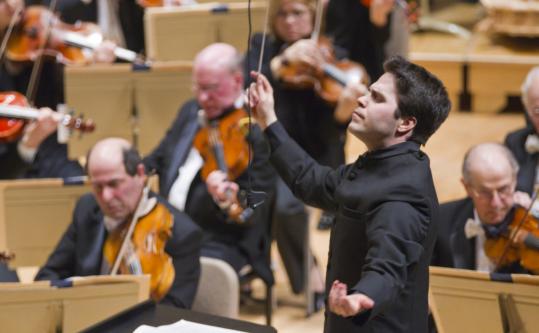 At the concert’s official start time, managing director Mark Volpe took the stage to tell a near-capacity crowd that Levine “recently had a procedure to address his ongoing back issues.’’

“Unfortunately, he is experiencing some complications which have been further exacerbated by a viral infection,’’ Volpe said.

Sean Newhouse, one of the BSO’s two assistant conductors, stepped in to lead the performance in his BSO debut.

Newhouse, 30, had led one rehearsal with the orchestra earlier in the week but had never before performed Mahler’s Ninth. In the end, he did an honorable job with a tremendously difficult first assignment. But as the audience filed out, the hall buzzed with talk about the meaning of Levine’s withdrawal, coming as it does on the heels of last season’s difficulties, when back problems forced the conductor to miss more than half of his scheduled concerts, as well as the entire summer at Tanglewood. (More recently, Levine withdrew from his Saturday matinee performance at the Met, but this week he had led three rehearsals with the BSO.)

At this writing, there was no word on whether the conductor would return for any of the remaining three performances of the Mahler, scheduled for today, tomorrow, and Tuesday. Questions about the nature of the medical procedure Levine recently underwent were referred to his manager, Ronald Wilford, who was not reachable for comment.

If this leads to another extended absence by Levine, it would come at an unfortunate time in the BSO’s season, as the conductor is slated in coming weeks to lead some of the most artistically significant programs of the year, including, in addition to Mahler’s Ninth, the world premiere of a BSO-commissioned violin concerto by Harrison Birtwistle with soloist Christian Tetzlaff, and a distinctive Schoenberg-Mozart program with pianist Maurizio Pollini. In mid-March, he is scheduled to lead the BSO on a brief East Coast tour that includes three performances in Carnegie Hall and one at the Kennedy Center in Washington, D.C.

Last night at Symphony Hall, many audience members no doubt arrived with a memory of Levine’s previous Mahler’s Ninth with the BSO, superb and deeply moving performances in November 2007. Given the circumstances, you had to feel sympathetic for Newhouse, who began last fall at the BSO but had not been scheduled to make his official debut until this August at Tanglewood.

After a slightly shaky start, the young conductor’s performance last night appeared to grow in confidence over the course of this epic symphony. The exaggerated rusticity of the dances in the second movement came through clearly, as did the vigor and drive of the sardonic third movement, if not quite the sheer sonic violence. The BSO often played beautifully for him, the strings digging in deeply in the final movement to produce a glowing and expressive tone.

It would not be fair to hold Newhouse to the standards of what a veteran Mahler conductor should bring to a performance of the Ninth, which would have included a much more developed sense of structure, large-scale pacing, and musical through-line, as well as more transparency of orchestral detail. He looked relieved and deservedly thrilled at the close of the night, emphatically thanking concertmaster Malcolm Lowe and receiving a warm ovation.