Savor the slow burn of ‘King of Limbs’

Be patient with the Radiohead fans in your life — out of nowhere, the band released a new album on Friday, and it’s likely hogging all of their focus.

Announced last Monday to be digitally released this past Saturday and (surprise!) dropped a day early in time for the weekend, the English band’s eighth album, “The King of Limbs’’ was likely responsible for more than one slow Internet connection when it was flung into the tubes.

Since the band’s feather-ruffling 2007 pay-what-you-please album “In Rainbows,’’ and following a series of successful webcast performances from its practice bunker, the Internet has proven to be one of Radiohead’s most welcoming venues. It’s hard to think of another band so skilled at summoning fans to their headphones.

And while a deluxe physical “newspaper album’’ version — with two vinyl records and more than 625 individual pieces of artwork bound in oxo-degradable plastic — will be released in early May for between $48 and $53 (depending on whether your included download is MP3s or the more luscious .WAV files), the collective impulse for well-trained Radiohead fans is to beat each other to the click — and the commentary.

This strategy has paid off for the band — who earned more in pre-release sales from “In Rainbows’’ than from the whole haul of 2003’s “Hail to the Thief.’’ But this drive to hurry-up-and-hear-it doesn’t always serve the songs — least of all the slow burners that make up “The King of Limbs.’’

Textures and techniques have reliably varied from one Radiohead album to the next, but it’s no slight to say the band has relied on a consistently altered consistency over the years — a perceived sameyness that stokes understandable frustration among those still praying in vain for another bombastic alt-rock gauntlet like “OK Computer.’’

If there’s anything aggressive about this album, it’s the tense calm these eight songs maintain — a composure that feels constantly ready to crack. It isn’t that “The King of Limbs’’ pulls its punches, it would just rather surround than attack. Where “In Rainbows’’ was mellow but brisk — an album that felt on its way somewhere — these songs are eerie and insidious, creeping like shadows — and, often because of the haunting voice of Thom Yorke, the occasional chill.

“Bloom’’ rises from a hypnotic loop and a jagged synthy chirp — a “Kid A’’ amuse bouche of sorts — and staggers forth on Phil Selway’s stammering drums, beaming horns, and a barely-there bassline from Colin Greenwood that somehow gives the whole swirl the fragrance of dub. “Giving Up the Ghost’’ starts stark and gentle, with tame acoustic guitars lilting upon modest hand percussion; then it goes spectral, slowly pulling apart into glowing streaks of delay. Its grandest gesture is the absence of one.

As with most of the record, the jittery “Morning Magpie’’ holds the guitars of Johnny Greenwood and Ed O’Brien close to the chest — there’s not a solo in sight. And while “Little by Little’’ and “Lotus Flower’’ would fit snugly anywhere in the band’s catalog, they’re lit by a gray-green miasma that feels unique to this album — and uncannily fresh for how familiar it is.

The gleaming, echoing pianos of “Codex’’ fill the song up like smoke. On any other Radiohead album, its melody would pull you along with it like an undertow; but here, its foggy trails of brass merely glow in the distance, beacons beckoning. It’s easy to give in and follow these songs to the end; the challenge is to follow their implicit example and take as much time as you need. 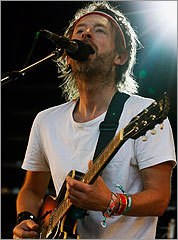 (Luke MacGregor / Reuters/ File 2010) Radiohead frontman Thom Yorke.
Your comment is subject to the rules of our Posting Policy
This comment may appear on your public profile. Public Profile FAQ