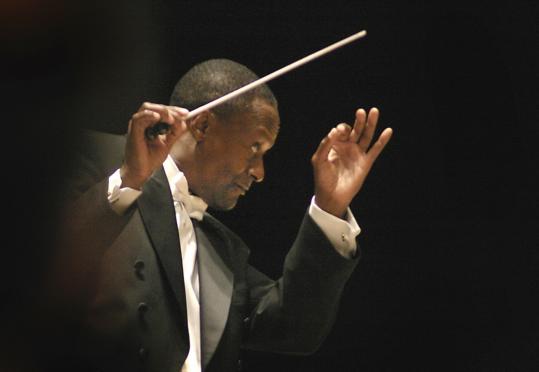 The Boston Symphony Orchestra announced today that it has appointed Thomas Wilkins its conductor of Youth and Family Concerts. This morning at Symphony Hall, Wilkins will lead the first of six programs for young audiences from area schools. On Saturday he will lead two additional programs geared toward families.

Wilkins, 54, is in his sixth season as music director of the Omaha Symphony, and he is also the principal guest conductor of the Hollywood Bowl Orchestra. At the BSO, he will be the first African-American to hold any conducting appointment in the orchestra’s history. Beyond leading the annual youth and family concerts, Wilkins will also participate in the BSO’s other educational and outreach activities.

Speaking by phone en route to Boston, Wilkins said he first led performances for audiences new to classical music while serving as an assistant conductor at the Richmond Symphony. “I discovered not only that I was good at [these concerts], but that I loved doing them,’’ he said. “I just love getting people to fall in love with classical music.’’

He added that his belief in the importance of musical outreach work stems from the transformative role music played in his own early life. “I was once that little 8-year-old-boy, born to a single mother in a housing project in Norfolk, Va., who went with his class to a concert and decided that day: I want to be a conductor,’’ he said.

“One of the things I often talk about now is that we have to give kids a location with a view so they have the ability to formulate a vision. That’s really where I come from with my education concerts. All of it is informed by my own life experiences.’’

Wilkins studied music at the Shenandoah Conservatory in Virginia, and later earned a master’s degree from New England Conservatory, where he worked closely with Richard Pittman, music director of Boston Musica Viva. “He was one of the most significant influences on me as a conductor,’’ said Wilkins.

Wilkins’s new post with the Boston Symphony was last occupied by Keith Lockhart, who held it for almost a decade before giving it up in 2004 to focus on his commitments to the Pops. Prior to that, Harry Ellis Dickson had held the position. Wilkins, who first led the BSO at last year’s youth and family concerts, anticipates that he will spend 30 to 40 days per season in Boston, conducting and helping to enhance the BSO’s existing community outreach efforts.

“He’s very comfortable with any audience,’’ said Myran Parker-Brass, the orchestra’s director of education and community programs. “So we’re hoping he will really become the face of education programs here at the BSO.’’