Driving along a different road

Lucinda Williams steers away from heartbreak toward more topical songs 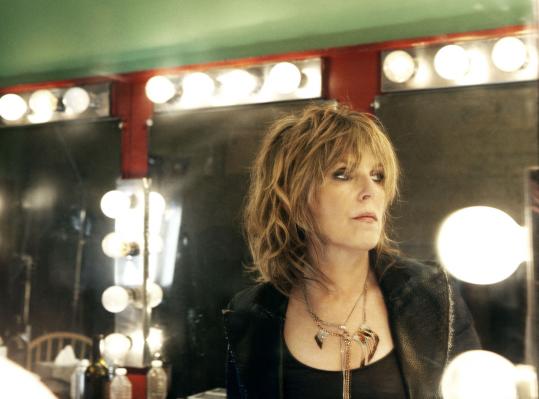 Lucinda Williams says that her latest album shows she is "learning how to write about other things besides unrequited love." (James Minchin III)
By James Reed Globe Staff / February 6, 2011
Text size – +

When you the words “Lucinda Williams marriage,’’ one of the first items you get is a headline stating the country-rocker was married on stage. Sure enough, the moment lives on in a YouTube clip where Williams said “I do’’ in front of family, friends, and fans at the end of one of her shows in 2009.

It’s touching to watch Williams and Tom Overby, her manager, exchange vows amid the crowd’s hoots and hollers; confetti falls when they kiss and they’re proclaimed husband and wife.

The more selfish fan, though, might have wondered: How will wedded bliss change Williams, a respected writer known for some of the most gut-wrenching love songs of the past 30 years?

The answer is on “Blessed,’’ her enlightened forthcoming album that shows Williams stretching, beautifully, beyond her usual tropes. Yes, she still knows how to nurse a broken heart like she’s done it a million times, but there are several songs that address humanity at large. Or “the agonizing beauty of life,’’ as Williams likes to call it. She agrees that “Blessed,’’ which will be released on March 1, is probably the most universal record she’s ever made.

“One of the reasons for that is I’m branching out and learning how to write about other things besides unrequited love,’’ says Williams, who will perform at the House of Blues on March 9. “There’s other stuff to write about. It’s really easy to write a love song. A break-up song? C’mon, that’s the easiest thing to write. Boy meets girl, boy leaves girl, girl feels bad. I could write those songs in my sleep now.’’

“Blessed’’ is also notable for its supporting cast. Elvis Costello, who sang a duet with Williams on 2008’s “Little Honey,’’ contributes searing guitar work on a handful of songs. Having admired his previous work in various genres, Williams chose Don Was to co-produce the album, and his touch is often light and ethereal. Williams says one of the first things Was told her in the studio was that he wanted to build the album around her voice.

You can literally hear the care Was took to put Williams front and center, particularly on “Awakening,’’ which Williams considers the flip side to an earlier song, “Atonement.’’ It’s a stark bit of storytelling with her lyrics rattled off in short cadences, almost like biblical scripture.

“I was influenced by that in one way or another by virtue of the fact that both of my grandfathers were Methodist ministers,’’ she says. “But I certainly wasn’t raised as a fundamentalist Christian.’’

Williams also explores her feelings about war with a pair of songs, “Soldier’s Song’’ and “Blessed,’’ and it’s a theme that’s been on her mind a lot lately.

“How could it not be?’’ she says. “We’ve been a nation at war for so long now. As I’ve gotten older, I have a more mature perspective on soldiers going to war. There’s a big difference now between where we are this time and when we were in Vietnam and I was a teenager in the ’60s. What turned things around for me was meeting Vietnam veterans later as I got older.’’

Other times “Blessed’’ unfurls with sage wisdom that has come with age. Williams recently turned 58 and says she’s more prolific now than ever, but she admits she couldn’t have written some of the new songs earlier in her career. She simply didn’t know how to back then.

“Even when I was younger, I always wanted to branch out and write more topical songs, the kind of stuff that Bob Dylan was good at. Not necessarily protest songs, but just songs about other people,’’ she says. “It’s more difficult for me to step outside of myself and write about other people. That was a big challenge. For me, it’s very satisfying because I’m finally doing something I’ve been wanting to do.’’

As so many moments on “Blessed’’ can attest, some things really are worth waiting for.

“I have a lot of songs that I started a long time ago, but they weren’t ready to be finished,’’ Williams says. “It’s a constant work in progress for me.’’