Liszt marathon is strong from start to finish 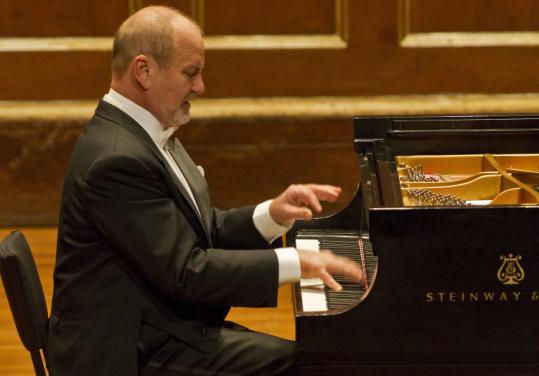 Liszt was many things; boring wasn’t among them.

Naturally, there was Liszt the virtuoso. Dudochkin and Sergey Schepkin offered Liszt’s four-hand arrangement of his greatest hit, the “Hungarian Rhapsody No. 2,’’ a fleet, fun rendition full of the pointedly casual understatement a canny actor might use for Hamlet’s equally familiar soliloquies. And a distinguished guest, the Ukranian-American pianist Mykola Suk, brought further thespian expertise to the “Hungarian Rhapsody No. 12’’: big splashes of color, no small amount of sparkle, and a sense of timing to do any showman proud.

The NEC Youth Orchestra, conducted by Steven Karidoyanes, took the stage for the second half. In “Les Préludes,’’ the group’s rustling energy rose to a grand conclusion, capturing the sort of sincere flashiness that was Liszt’s gift to Hollywood. The composer’s setting of Heine’s “Die Lorelei’’ had its sinuous moments, though soprano Yelena Dudochkin was a less than seductive siren, blanketing the tale in a monochromatic, aggressive vocal color.

But the finale was a magnificent, macabre marvel: “Totentanz,’’ Liszt’s over-the-top dance-of-death theme and variations. Suk returned as piano soloist, scrupulously exploiting a formidable palette of touch and mood; the orchestra followed suit, playing with serious flair. The performance did justice to both the music’s ridiculous ingenuity and its ingenious ridiculousness. For Liszt, creativity and flamboyance were symbiotic.