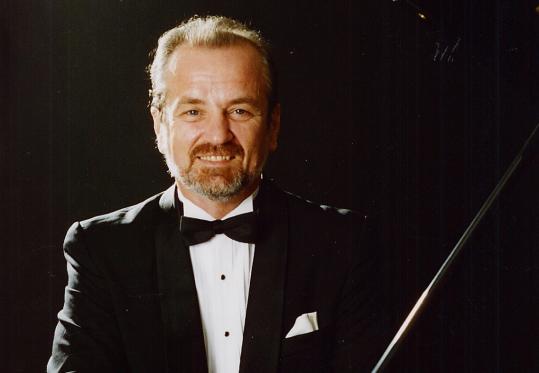 Mykola Suk acquired a reverence for Liszt during his time at the Moscow Conservatory. (Joe Dombroski)
By Joseph Horowitz Globe Correspondent / January 30, 2011

Franz Liszt was one of the defining demonic personalities of the Romantic epoch. His piano music invites an act of reckless personal investment: the invitation to inhabit Liszt the man. A great Liszt performance is certain to be startling, singular, unsettling. By this criterion, Mykola Suk — who makes a rare Boston appearance tonight at New England Conservatory’s “Salute’’ to the bicentennial of Liszt’s birth — certainly qualifies as a great Liszt interpreter.

If Suk is not a household name in classical music circles, it is partly because he purveys a kind of music-making — and not only in Liszt — not much in fashion over the past half-century. Also, he is too modest a man, too prone to worldly self-doubt, to campaign for himself. Born in Kiev in 1945, he was a professor of piano at the Moscow Conservatory before immigrating to the United States in his mid-40s — too old to profit from the appetite for youth that distorts our musical high culture. In 2002, he joined the piano faculty at the University of Nevada in Las Vegas.

Suk’s signature piece is Liszt’s “Dante’’ Sonata (as heard, for instance, on an astounding Music & Art CD also including the Liszt B minor Sonata and three Hungarian Rhapsodies, all in live performance). With its cascading octave chains, the work itself was self-evidently born in a tumultuous act of improvisation. And Suk’s epic reading sounds truly improvisatory: No transcription would closely resemble Liszt’s notes on the page. To be sure, the notes are there (mainly), but Suk’s liberties — of tempo and rubato; of pedal, touch, and dynamics — are extreme. In fact, to follow the score, listening to Suk, is a confining and irrelevant experience. Liszt’s “fantasia quasi sonata,’’ abused by mere virtuosos, rematerializes as an essay in emotion benumbed and tragedy spent.

In Boston, Suk performs not the “Dante’’ Sonata, but the Hungarian Rhapsody No. 12 and “Totentanz’’ for piano and orchestra — a pairing that discloses two sides of Liszt, and also of Suk. If at the keyboard, he is an artist inhabited and possessed, in conversation recently he was soft-spoken, ruminative, ironic.

“For many years, I avoided ‘Totentanz.’ I’m ashamed to say I didn’t take it as seriously as the concertos, or even the Hungarian Fantasy, which is a great piece of its kind. I can’t say that I’ve become any wiser — only that I managed to take a closer look this time. On the Sistine Chapel ceiling, Michelangelo paints a man who’s covering one of his eyes, because he can’t bear to watch what he’s seeing — and who can’t stop watching with his other eye. He’s both overwhelmed and fascinated by fear. Some people find some of the imagery in this piece satirical or grotesque. I don’t. It depends on your own point of vision, your own eyes.’’

Judging from Suk’s performance of “Totentanz’’ last spring with Post-Classical Ensemble of Washington, his “Totentanz’’ is unlike any other. Typically, this work is a high-powered sprint that either ignites or descends into a purgatory of fiendish kitsch. By contrast, Suk navigates an existential narrative the whole of which is consumed by a devouring gravitas. Though he maximizes the play of tempo, expression, and dynamics, the piano is at all times a means, not an end.

The luxuriously upholstered 12-minute Twelfth Hungarian Rhapsody that Suk also performs in Boston is in his opinion “the most developed Hungarian Rhapsody in terms of variety of thematic materials, texture, and pianistic skill.’’ Asked about the stereotype of the Liszt rhapsodies as flashy, superficial music, he replied: “I violently reject this opinion. Forty years ago, almost nobody considered this performable music. Some people are so starchy, they don’t even try to look beyond their prejudices. But we’re humans, we inhabit a circle of feelings. Why not some pleasure and entertainment? Also, the Hungarian Rhapsodies — all of Liszt’s pieces, in fact — are pianistically very convenient. They may be terribly difficult, but unlike, say, Tchaikovsky or Brahms, they’re always convenient for the hand. And some of the Hungarian Rhapsodies are hardly touched — number three, for example, which isn’t virtuosic at all.’’

Suk acquired his reverence for Liszt from his principal teacher at the Moscow Conservatory, Lev Vlassenko — a pianist known in the United States, if at all, for having finished second to Van Cliburn in the 1958 International Tchaikovsky competition. Vlassenko did win the 1956 Liszt/Bartok Competition in Budapest — and so did Suk, 13 years later.

“Everything I can do in Liszt I owe to him,’’ Suk says of Vlassenko. “I take full responsibility for this statement. It doesn’t mean that what I do is the same as what he did. It’s been 15 years since he died, and how often I am thinking back to him. I would not say we were friends, because he was my mentor. But we actually spent a lot of time together, including recreational time, and conversations at difficult moments in my life. He once told me, ‘There are so many composers. But if I have to narrow the list as much as possible, there will be only two: Beethoven and Liszt.’ ’’ Suk himself considers the Liszt Sonata the pinnacle of the piano literature.

Vlassenko wrote of Liszt: “I think that each performer has ‘his own’ Liszt. I try to stress the virtuosic side of his music as little as possible. I never cease being surprised at the strength, depth, and humanity of Liszt’s passion and world suffering.’’

Suk: “You know, it’s true. Very often, you can present his music just as a showcase for the fingers. There’s a passage near the end of the ‘Dante’ Sonata with leaps and skips that’s just for display. I know at least one pianist who simply omits this passage; it doesn’t bring anything to the music. As for ‘world suffering,’ of course our existence consists quite a lot of that. I’m not a pessimistic person, I’m an optimist. And yet Goethe, in his ‘West-Eastern Divan,’ writes something very interesting: ‘I read the book of love, the book of life — pages of joy, volumes of sorrow.’ And this is reality. Tell me, what is more memorable in art — moments or joy or moments of suffering? Suffering, for example, generates compassion: a very powerful mood.’’

Another great Lisztian who eschewed display was the late Claudio Arrau, who once advised: “When people in Germany today perform Schiller, I always complain that they seem to be ashamed of the pathos. They think it’s old-fashioned. But you can’t play Schiller or Liszt with restraint. It becomes unbearable. Schiller’s drama and Liszt’s music have to be made.’’

Suk: “I absolutely agree with that. In fact, I am positive that everything has to be made, including ‘Twinkle, Twinkle, Little Star.’ You know, there is no direct linkage between a performer and his audience. You can’t just feel something, you have to present your feelings. At the same time, I am not sure I agree with Arrau when he also suggests that some of Liszt — say, ‘Totentanz’ — becomes kitsch unless it’s ‘made.’ It has never once crossed my mind that ‘Totentanz’ could be considered kitsch. Thomas Mann said that a banal idea becomes banal only because it’s used too much, and it’s used too much only because it has some value.’’

One reason Suk’s name is not much heard in the United States is that many of his engagements are abroad. New Yorkers are fortunate to hear him every summer at the International Keyboard Institute and Festival at Mannes College, where his programs have included the complete Chopin Preludes, Beethoven’s “Moonlight’’ Sonata, and handpicked novelties by a range of composers including C. P. E. Bach, Hummel, and Mendelssohn. On July 30, for the bicentennial of Liszt (born Oct. 22, 1811), he is giving a festival recital including “Funerailles,’’ “Les Cloches de Geneve,’’ two Hungarian Rhapsodies, and — a world premiere — “Homage to Liszt’’ by his eminent Ukrainian countryman Valentin Silvestrov.

“For the past decade or so he’s been composing hundreds of small pieces. There are two cycles dedicated to me, including various ‘homages’ to Chopin, Schumann, Schubert, whomever. I phoned him and said, ‘Valentin, the Liszt year is coming up and you have nothing for him.’ So he wrote these two waltzes in homage to Liszt. And there will be one other piece on the program not by Liszt: the ‘Moses’ Fantasy by Sigismund Thalberg, which he played in his famous ‘duel’ with Liszt in Paris in 1837. Liszt played his ‘Niobe’ Fantasy. I’ve looked at that piece, it’s not worthy of attention. Thalberg’s was the much better composition. Maybe that’s why Princess Belgiojoso offered her famous ambivalent verdict: ‘Thalberg is the first pianist in the world — Liszt is unique.’ ’’

And so is Mykola Suk.

Joseph Horowitz is a writer, artistic consultant, and teacher. He can be reached at jh@josephhorowitz.com.