For Plant, hootenanny at House of Blues 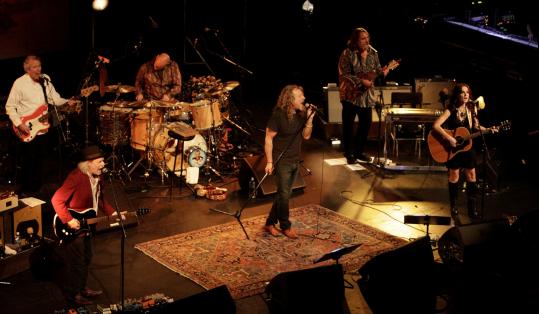 The irony of seeing him backed by banjo, mandolin, pedal steel, and maracas was not at all lost on Robert Plant.

“Lord, have mercy. I love this hootenanny!’’ he said Tuesday night at a sold-out House of Blues, undoubtedly one of the smaller venues he has played around here in several years.

Hootenanny might be the very last word anyone would associate with the rock god who once fronted Led Zeppelin. But a communal spirit was exactly what he channeled with Band of Joy, his latest venture.

Ever since 2007’s “Raising Sand,’’ his Grammy-winning collaboration with Alison Krauss, Plant has become something unexpected: one of Americana’s more arresting torchbearers. Band of Joy, a name he resurrected from a group that was a precursor to Led Zeppelin, is the natural extension of his work with Krauss. It is also a more freewheeling project that lets Plant delve deep into country blues, contemporary rock songs, and tambourine-shaking gospel. He remarked early on Tuesday night that because he is British, exploring American music has been a rewarding chance for him to stretch.

It helps that he has chosen exemplary musicians culled from Americana’s upper ranks. Buddy Miller was a monster on guitar, at once punishing and pushing songs well past their country leanings. But then Darrell Scott — on everything from pedal steel to mandolin to banjo — firmly planted them in American soil again. Patty Griffin struck a seductive chemistry with Plant, always just a few feet away from him, but her back-up vocals wrapped around his like a vine. She had the unenviable task of singing Krauss’s parts on “Rich Woman’’ and “Please Read the Letter,’’ but her performance was truly her own.

The band was nimble enough to tackle several songs from last year’s “Band of Joy,’’ plus a few from Plant’s solo catalog (“Tall Cool One,’’ “Down to the Sea’’). A surprising number of Zeppelin songs made it into the set list, too. Cast in a rootsier context, “Ramble On’’ and “Gallows Pole’’ became sing-along odes to salvation. “Tangerine,’’ which was already rustic in its original rendition, simply shimmered.

Plant was obviously the main attraction, but it is not hyperbole to say that the band, which at one point he called “omnipotent,’’ mined an exceptional performance from him. He was having fun. He was also gracious enough to let Griffin, Miller, and Scott have their own moments in the spotlight, hanging back to sing harmonies and even vamp on harmonica. Led by Scott, the country standard “A Satisfied Mind’’ resonated as if we were at, well, a hootenanny.

ROBERT PLANT & THE BAND OF JOY At: House of Blues, Tuesday