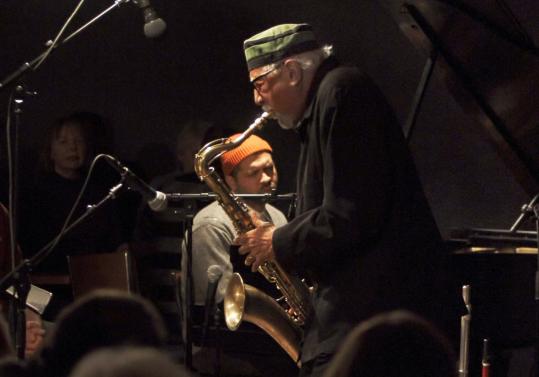 CAMBRIDGE — Here’s how much respect Charles Lloyd has for his sidemen. Upon finishing his first solo of the night, the saxophonist sat on the bench next to the piano. Suddenly realizing he was obstructing some people’s views of Jason Moran, he stood and walked behind the drum kit, where he watched the pianist until it was time to reenter.

In fact, Lloyd seemed to enjoy himself most when he was listening to his rhythm section play without him. In a jazz combo, nothing is more important than the interaction among the musicians, and this is especially true with Lloyd. This is the Charles Lloyd Quartet, not the Charles Lloyd show.

Lloyd has been at this a long time. But the 72-year-old saxophonist, who’s been performing and recording since the early ’60s, pulled off perhaps the savviest move of his career three years ago when he hired three outstanding men in their 30s as his rhythm section — drummer Eric Harland, bassist Reuben Rogers, and Moran, who’s heralded as the most talented pianist of his generation.

The first of four sets over two nights at the Regattabar began with Harland tapping a hypnotic beat on the kick drum. Lloyd blew a few vibratoless notes that sounded as though they were posing a question. Rogers plucked a solitary string, and another, and then it became a steady rhythm. Moran watched and waited, and waited, listening intently. He rubbed his right eye, then shot Rogers an inquisitive look. Ah, the time was right, and Moran dashed off a flashy ostinato with both hands on the upper third of the 88. Suddenly the quartet was playing its own arrangement of the gospel song “Go Down Moses.’’

A placid version of “I Fall in Love Too Easily’’ followed, and here the contrast between Lloyd’s serene, spiritual tone and Moran’s angular approach worked beautifully. Lloyd played melodically and right on the rhythm, whereas Moran delayed notes and phrases, creating dramatic tension. The way these guys listen to and appreciate one another came to the fore on a lilting cover of the Beach Boys’ “Caroline, No.’’ Halfway in, Lloyd played a phrase that made Rogers smile and Moran laugh (a musical inside joke?), and later, when Moran’s solo was about to conclude, Lloyd put his mouth to the reed but then stopped himself. “Play it,’’ he told Moran, who nodded slightly to the leader, as if to say, “No, no, your turn now.’’ Lloyd touched his hand to his heart and obliged.

The set climaxed with two complex pieces — “Prometheus,’’ featuring great, harshly punctuated runs and free-improv segments, and “Booker’s Garden,’’ for which Lloyd took up the alto flute. The latter tune started as a quiet meditation and abruptly turned into a churning, fiery number, then evolved again, into a bit of funk-soul that had Harland holding two sticks in his left hand, like chopsticks, to create a skittering effect on the hi-hat. Moran laid down gale-force runs, and Lloyd, when he wasn’t playing wondrous passages, sat on the bench, eyes closed, taking it all in, loving it all.