A redemption, of sorts

Reissues and a one-off reunion for ’80s band 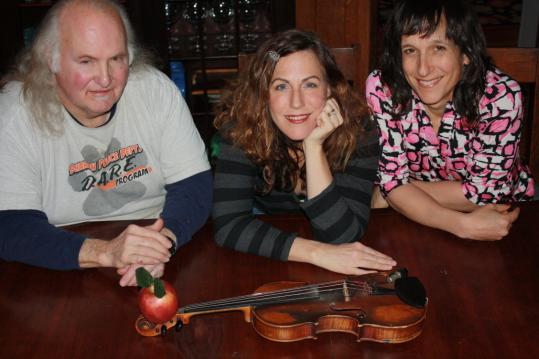 By all accounts, 1988 was a tidal wave in the history of Boston’s alternative music scene. The same year that the Pixies unleashed “Surfer Rosa,’’ Throwing Muses, Galaxie 500, and Blake Babies were all courting national attention and college radio play.

And then there was Ed’s Redeeming Qualities. You’ll be forgiven if your memories are a little fuzzy about this acoustic ensemble that came together almost by accident in early ’88. People didn’t know what to make of the band — neither then nor now — but anyone who saw Ed’s, at long-gone clubs such as the Rathskellar, can probably tell you a good story about that night.

Ed’s was the prototype for the little indie band that could, a cult favorite particularly embraced in Boston even though it formed in New Hampshire when its members — Carrie Bradley, Dani Leone, and Neno Perrotta — were graduate students in writing programs. Dom Leone, Dani’s cousin, later joined the band, but his tenure was short; he died in 1989 from cancer.

“There was something about the time and place of Boston in the late ’80s that was very serendipitous and right for the spirit of what we were doing,’’ Leone says. “We were appreciated in New Hampshire, but we were also heckled.’’

After two years in New England, the group uprooted to San Francisco and survived various lineup changes until it officially disbanded in 1996. No one predicted Ed’s would be returning for a hometown show more than a decade later, but that’s what’s happening tomorrow night at T.T. the Bear’s.

At the suggestion of Ray Halliday, the band’s former manager, the group’s three remaining original members will reunite for a one-off performance that coincides with the first-ever digital release of its early work with Dom. “Ed’s Redeeming Qualities,’’ “Ed’s Kitchen,’’ and “Guess Who This Is,’’ all of which were previously released only on cassette, will be available at the show.

Even in Boston’s vibrant music scene at the time, Ed’s stood out. Similar to Jonathan Richman, they wrote and played amusing story-songs with a casual charm that could sometimes be mistaken for naiveté or pretension. Bradley remembers agonizing over the task of trying to define Ed’s sound back in those days. “At this point in my life, I take an easy out and I usually call it garage-folk, with an emphasis on storytelling and black comedy and poignancy,’’ she says.

And who, exactly, was the audience for such a band? Ed’s wasn’t quite folky enough for the purists, and yet it didn’t exactly rock out, either. “We did pretty well with the rock crowd because we had a rock spirit even though we were acoustic and had limited talent on our instruments,’’ says Bradley.

She notes that they didn’t even have a drum kit, for heaven’s sake: In the liner notes to the album “It’s All Good News,’’ Perrotta’s contributions are listed as “bongos, clarinet, rice in a coffee can.’’ (He’ll be playing that same Folgers can with the same rice at T.T.’s, by the way.)

“They were totally different than anybody else,’’ says Kim Deal, who befriended the band right as the Pixies were on the ascent and later recruited Bradley to play violin with Deal’s next band, the Breeders. “They were really good at what they were doing, but there was a really cool amateur quality that was truly amateur. They were fun, too, sort of like the Pogues — but with more teeth.’’

Deal later immortalized the band when the Breeders covered “Drivin’ on 9,’’ an early Ed’s song, on “Last Splash.’’ She says it’s so popular that they still perform it in concert.

As other local bands seemed primed for a breakthrough, Ed’s stayed true to its low-key roots, selling homemade cassettes from the stage and bantering with the audience as if no boundary existed between them. In place of Internet buzz, they depended on fanzines and local radio play. “Lawn Dart’’ was a major hit — “at least in Kenmore Square,’’ notes the press release about the T.T.’s reunion show.

“We never really figured out why we got the response we did, but that kept it very innocent,’’ says Bradley. “We stayed always most interested in the writing itself and a kind of dialogue with the audience, which from the audience’s point of view, is part of what defined Ed’s Redeeming Qualities.’’

As she and Leone and Perrotta gear up for their Boston homecoming, their first local show since 1996, the momentous occasion has also posed a dilemma for Leone, who used to be known as Dan Leone before undergoing a gender transition.

But Leone also asserts she’s a more confident musician and singer, and that fans of Ed’s probably won’t be that shocked.

“I know there will be people there who remember Ed’s and a lot of people expect things to stay the same. We’re going to look older and different. And I’m going to look especially different,’’ she says. “My sense is that people who were Ed’s fans have always been up for surprises and enjoyed the unexpected treats that we brought to the stage because of the weird angle we had on music from the beginning.’’

And if there’s a lesson to be learned in the story of Ed’s Redeeming Qualities, it certainly hasn’t been lost on Bradley.

“If it’s possible that a tiny little band like ours, which made these obscure recordings for a small group of like-minded people, could have an impact across decades, then that’s pretty cool.’’