A little bit of everything, a lot to applaud 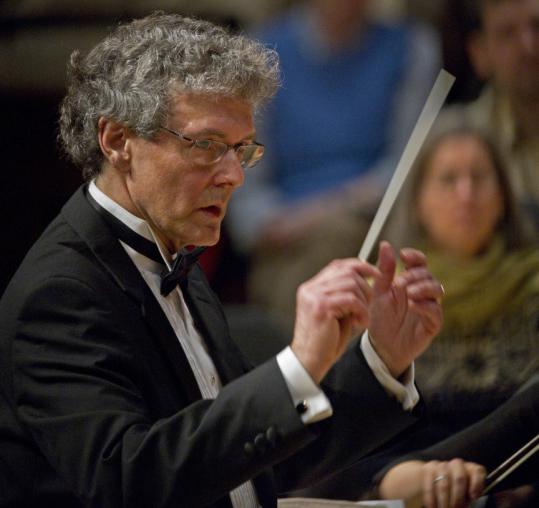 CAMBRIDGE — Boston Baroque and music director Martin Pearlman generously throw their annual New Year’s party twice, on either side of the midnight divide, offering chances to either ring in the new year or recover from it in (mostly) high 18th-century style. This year’s program paralleled a customary menu for such a celebration: a little bit (and perhaps a little bit too much) of everything.

The festivities opened with Arcangelo Corelli’s Op. 6, No. 8 Concerto Grosso, the “Christmas Concerto,’’ named for the shepherds-abiding Pastorale that Corelli added to the piece for a holiday performance. The group’s rendition was headlong cheer, all forward momentum; the delicate fizz of Corelli’s suspended dissonances and the echoing byplay between the first and second violins (led by Christina Day Martinson and Julie Leven) were passing dashes of texture in a peppy, fast-moving landscape.

Johann Sebastian Bach’s Concerto for Oboe and Violin (BWV 1060, reconstructed from later versions, a sequel and a remake all in one) offered the promise of lively discussion, with Martinson’s tightly-wound violin tone set against oboist Marc Schachman’s comparative placidity. But the first two movements were tentative — the phrases curling inward, the energy rationed — before the finale brought a volley of athletic virtuosity. It seemed to foreshadow a carousing aftermath: gingerly tiptoeing around a hangover before resolving to dispel it with a burst of exercise.

A guest then whirled into the gathering: bass-baritone Kevin Deas, returning with a sampling of lighter fare after anchoring Boston Baroque’s “Messiah’’ last month. The repertoire was a grab bag: Polyphemus’s aria from George Frederick Handel’s “Acis and Galatea’’; a hand-clapping, crowd-pleasing spiritual, “Didn’t My Lord Deliver Daniel?’’; and Kern and Hammerstein’s “Show Boat’’ standard, “Ol’ Man River.’’ But Deas sings everything with elegance, the gravity of his tone laced with polished lyricism, his diction marvelous, his passagework flexible, his phrasing unfailingly suave. He was the gallant life of the party.

Another remake followed intermission: Francesco Geminiani’s Concerto Grosso No. 12, arranged from his teacher Corelli’s celebrated set of variations on “La Follia,’’ that ubiquitous set of Renaissance harmonic changes. The alternation of soloists and full ensemble proved eminently durable, the wiry verve of Martinson, Leven, and cellist Sarah Freiberg landing again and again on a grand orchestral cushion; the ever-more-elaborately spun repetitions were a profusion of agreeable company.

After such a varied banquet, to end with the whole of Handel’s F major “Water Music’’ suite (garnished with the famous “Alla Hornpipe’’ from the D major suite) was not unlike replacing dessert with another entire meal. And though the quality never flagged — the Bourreé sneaking in with cat-like tread, the Hornpipe delivered with straight-backed flair — Handel’s prodigal repeats eventually seemed to bleed into each other. Boston Baroque’s marathon of indulgent revelry dissolved into a rich blur. Then again, isn’t that how most New Year’s parties end?