Levine returns, and a hall debuts 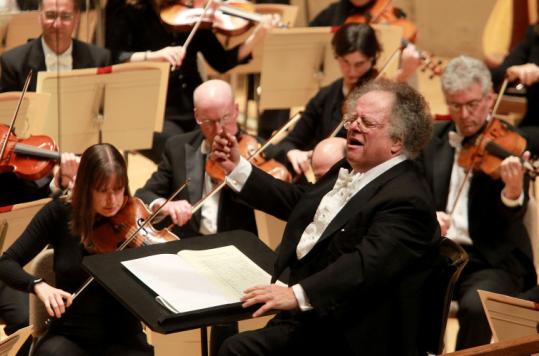 At the city’s biggest musical institution, the subject of conductors’ health loomed all too large this year. As Seiji Ozawa fought esophageal cancer and debilitating sciatica, James Levine underwent a second major back surgery that sidelined him for most of the spring and summer, including the full Tanglewood season. Substitutes of course were found, but Levine’s absences took a toll on orchestra morale and seemed to test the patience of the public. Even a few of his staunchest champions wondered privately whether he would return to conducting.

But return he did this fall, and at musical full force. First up was the Metropolitan Opera’s highly touted new staging of “Das Rheingold,’’ in which the Levine-led orchestral performance went a long way toward compensating for a disappointing production by Robert Lepage. Then came a triumphant opening night at Symphony Hall with the Welsh bass-baritone Bryn Terfel. Some impressive Mahler followed, and since then, the fall BSO highlight has been a superbly played evening of Second Symphonies, those of Schumann and John Harbison, whose symphonic cycle is off to an excellent start. If Levine can at least hold the current line, there should be some richly rewarding music-making in the year to come.

Boston’s opera world saw highs and lows in 2010. Esther Nelson at Boston Lyric Opera cannily demonstrated that her company can please tradition-minded patrons while at the same time break new ground in its Opera Annex series, which will add a fourth production each season to be staged outside of BLO’s home at the Shubert Theatre. This year, the company brought Britten’s “Turn of the Screw’’ to the armory at the Park Plaza Castle, and even with some imperfections, it proved a much-needed blast of fresh air, a box-office success, and a choice that clearly puts the lie to the theory that tough times leave arts organizations no choice but to duck for cover. BLO also filled a long-vacant position, naming David Angus as its next music director.

Opera Boston meanwhile gave us some delightful Offenbach (“La Grande-Duchesse de Gerolstein’’) and some misfired Beethoven (“Fidelio’’). The company deserves real credit for commissioning a new opera, “Madame White Snake,’’ but the work’s libretto proved its undoing and not even an inventive score by Zhou Long could save it. Opera Boston, too, appointed new leadership, with Lesley Koenig beginning next month as general manager. Elsewhere on the local opera scene, Boston Early Music Festival announced plans to bring its high-quality chamber operas on tour in North America, which will certainly help this organization, better known in Europe than in the United States, raise its profile. The small indie companies also showed spunk and creativity. I can still recall every detail of Opera Hub’s vivid take on Zemlinsky’s “Der Zwerg.’’

It was a big year for Cape Ann, as the Rockport Chamber Music Festival opened the Shalin Liu Performance Center, a beautiful hall overlooking Sandy Bay. This clearly marks an exciting new era for Rockport Music, and regional audiences will be watching closely to see how the festival expands its artistic ambitions to fill its new space. It was also a good summer at Bard College, over in Annandale-on-Hudson, N.Y., with its focus on Alban Berg, and with Leon Botstein leading the North American stage premiere of Franz Schreker’s bafflingly neglected opera, “The Distant Sound.’’

My accompanying list of memorable performances tells more of the story, at least through the ears of one itinerant listener. The Celebrity Series brought some bright lights to town, Handel and Haydn Society fruitfully deepened its relationship with artistic director Harry Christophers, the Abreu Fellowship took wing at New England Conservatory, Ryan Turner gracefully took the reins of Emmanuel Music, and Boston Chamber Music Society presented an ingeniously conceived winter festival on the subject of music and time. The coming year’s winter fest has been notably scaled back.

Two of the newer groups in town made some of the most serious waves, as a Far Cry and the Discovery Ensemble under Courtney Lewis both gave brilliant performances and thought creatively about repertoire. Meanwhile, local artists and ensembles continued to produce a steady stream of noteworthy recordings, including Mozart from the BSO, H&H, and Boston Baroque; Beethoven from cellist Laurence Lesser; Donald Sur from Collage New Music; Marian antiphons from Blue Heron; Yehudi Wyner’s liturgical music led by the composer; and a slew of quality releases from the Boston Modern Orchestra Project.

I watched with great interest as the New York Philharmonic audaciously programmed the New York premiere of Ligeti’s operatic masterpiece, “Le Grand Macabre,’’ and then went on to cleverly market it and sell out three performances, not at its summer residency site but in its own home at Lincoln Center. No doubt the concerts drew a very different audience from the one that attends the Philharmonic’s core classical offerings, but that’s precisely the point. Boston, too, with so many students and such a vibrant intellectual life, has no shortage of adventurous listeners who would respond to the right kinds of enticements.

The city’s music scene lost some inspired leaders this year, including the violinist Eric Rosenblith, the distinguished Harvard scholar Reinhold Brinkmann, the BSO horn player Jay Wadenpfuhl, and the passionately civic-minded maestro Charles Ansbacher. Less than three months before his death, Ansbacher led his Boston Landmarks Orchestra in a free concert for thousands in Fenway Park. The idea seemed at the time, and even more so in retrospect, the perfect realization of a populist’s dream.

How is a critic to interpret a year in film that just didn't send him? Ty Burr counts down is top 10 films of the year.

Every year some movie critic declares that the year was a superior one, despite plenty of evidence otherwise. This year that critic is Wesley Morris.
Your comment is subject to the rules of our Posting Policy
This comment may appear on your public profile. Public Profile FAQ