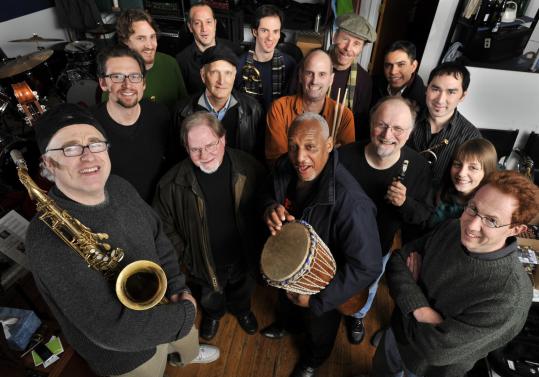 Sax player and composer Russ Gershon (left) with Either/Orchestra members and alumni in Somerville for a recent rehearsal. (Josh Reynolds for The Boston Globe)
By Andrew Gilbert Globe Correspondent / December 12, 2010

Summing up a quarter century of creative ferment isn’t a task for the faint of heart, but saxophonist/composer Russ Gershon has achieved far more improbable musical feats.

The founder and guiding spirit of Boston’s Either/Orchestra, Gershon has not only beaten the very long odds against maintaining a large working ensemble, he’s turned it into an international force, while running the 11-piece group as an invaluable proving ground for a steady stream of assiduously adventurous players.

In celebrating the band’s silver anniversary Thursday at Arlington’s Regent Theatre, Gershon plans to showcase Either/Orchestra’s vast range of resources, with a glittering cast of alumni as special guests and a book distinguished by Ellingtonian flourishes, Ethiopian tunes, and equatorial grooves.

“Just trying to program the concert is mind-boggling,’’ says Gershon, 51. “There’ll be 25 musicians there and it’s important that everyone gets their moment in the sun, but I also want to cover 25 years of musical development. I’m trying to discipline myself so as not to put on a 4 1/2-hour concert.’’

In addition to featuring his own compositions, Gershon is pulling out charts from the early days when bassist Bob Nieske and trombonist Curtis Hasselbring wrote prolifically for the band. And no E/O concert is complete these days without an Ethiopian excursion, an ongoing investigation that led to a heralded series of E/O performances in Addis Ababa and a series of collaborations with revered Ethiopian musicians (all captured on the 2005 album “Ethiopiques 20: Live in Addis’’).

In addition to Nieske and Hasselbring, altoist Miguel Zenón, trombonist Josh Roseman, pianist Leo Blanco, trombonist Dan Fox, and percussionist Manolo Mairena are some of the E/O veterans returning to the ranks (keyboardist John Medeski, drummer Matt Wilson, and saxophonist Andrew D’Angelo are on board for the E/O celebration Feb. 11 in New York at Le Poisson Rouge).

By consistently skimming the cream from Berklee College and New England Conservatory, the group has become an integral, albeit unofficial component of the region’s jazz edusphere, serving as a post-grad finishing school for three generations of major jazz talent.

“It’s stunning who has come through the band, and these people all came in super-accomplished,’’ says pianist Josh Rosen, a longtime Berklee faculty member who’s observed E/O from the beginning and occasionally subbed for the band. “But Either/Orchestra gets them out of school and on the road. They get the real thing: touring, playing festivals, international exposure. And they’re going to get touched by some Duke Ellington voicings, some Sun Ra cadences, and some Russ stuff.’’

Ever since Either/Orchestra’s near legendary debut on Dec. 17, 1985, at the Cambridge Public Library, Gershon has doggedly built the band in his image, with a combination of scrappy DIY determination, media savvy, and a catholic aesthetic largely unconcerned with the era’s Wynton Marsalis-driven controversy over whether the 1960s avant garde belonged in the jazz canon.

Gershon credits his wide-open sensibility to his formative years taking in the New York scene in the mid-1970s, when protean artists like Rahsaan Roland Kirk, Woody Shaw, Sun Ra, and Sam Rivers could be heard nightly. The Gil Evans Orchestra was a particular source of inspiration, and Gershon launched E/O out of a desire to create a similarly flexible format.

“I loved the combination of writing for an expansive horn section and raucous rhythm section, but he would let these amazing soloists take over the band,’’ Gershon says. “I remember thinking I’d like to hear something like that in Boston.’’

Boston is the only place E/O could have flourished, but the band truly became itself out in the hinterlands. After releasing 1987’s “Dial ‘E’ ’’ on his new Accurate label (Accurate’s role in raising the national profile of the Boston scene is another story), the group hit the road, crisscrossing the country playing rock clubs, dive bars, and restaurants where volatile orchestral jazz was rarely if ever heard.

While financially draining, the tours paid steep creative dividends, building camaraderie among the musicians and honing the ensemble’s already singular sound. Those road-tested bonds continue to hold strong, even as players leave the E/O fold for New York or their own projects in Boston.

“This concert is a celebration of the Either/Orchestra community, of the way that all of these musicians have contributed,’’ Gershon says. “It couldn’t have happened anywhere else. There’s too much centrifugal force in New York. In other cities I wouldn’t have had this stream of incredible talent that comes out of the music schools technically capable, broad-minded, and burning to play.’’