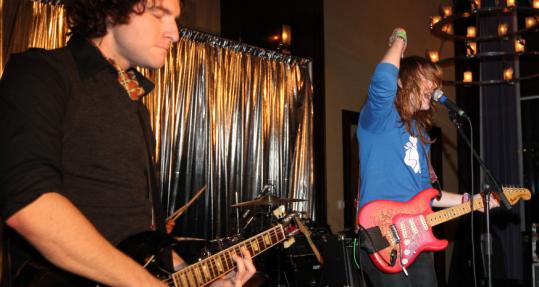 The question, after Amanda Palmer took Artist of the Year honors at the 2010 Boston Music Awards at the Liberty Hotel last night, was not whether this was her year. Rather, the question was: When is it not a banner year for Palmer?

In addition to reuniting with Dresden Dolls cohort Brian Viglione for a sold-out slate of shows, Palmer released a Radiohead ukulele covers album, starred in the American Repertory Theater’s production of “Cabaret’’ — and somehow found the time to discover a 17-year-old Berklee piano prodigy named Tristan Allen this summer. In accepting her award last night, Palmer performed “Creep’’ from the podium, red ukulele in hand.

Is it any wonder, then, that she managed to best four other nominees in this category, among them last year’s winners Passion Pit, and former J. Geils Band frontman Peter Wolf, who last night copped Album of the Year honors for “Midnight Souvenirs’’? Local singer-songwriter Dennis Brennan accepted the award on behalf of Wolf, whose song “Tragedy’’ was also nominated as Song of the Year. That honor ultimately went to the Worcester synth-pop outfit — and fellow Artist of the Year nominees — Dom, for their track “Living in America.’’ (Dom led all BMA nominees with four nods).

Great music and good cheer were everywhere, along with a jam-packed elevator or two. The rustic, roots-flavored Kingsley Flood delivered a high-energy set before grabbing New Artist of the Year honors. The group was also nominated as Americana Artist of the Year, which went to the musically pan-ethnic David Wax Museum.

Girlfriends, who took Rock Artist of the Year honors, were an electrifying live highlight, scuffing up the Liberty’s posh ballroom with a delightfully wiry set of tight, trebly garage rock. Soon after, Female Vocalist of the Year winner Jen D’Angora and her group, Jenny Dee & the Deelinquents, delivered an exuberant set that mixed mid-60s girl-group glee with Motownesque pop.

One of the night’s most anticipated and satisfying moments came when Boston garage R&B legends (and BMA Hall of Fame award recipients) Barry & the Remains plugged in and ripped through the clutch of classics they first played when they opened for — yes — the Beatles. It was indeed strange and sad that this year’s Unsung Hero Award recipient, scenemaker Billy Ruane, who died in October at age 52, wasn’t there to bear witness.