From dawn to darkness with Harbison’s Second Symphony 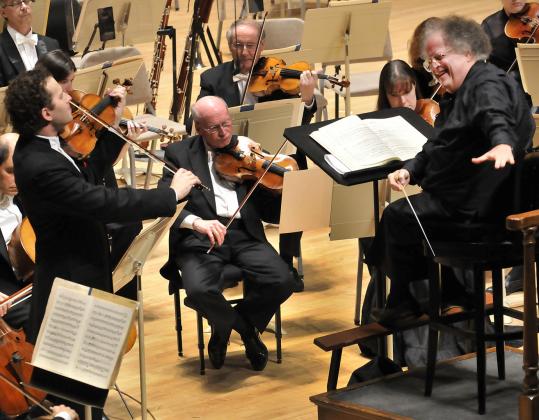 Thursday night’s BSO program offered a deeply satisfying summit of second symphonies, those of Schumann and John Harbison, to be exact. James Levine was on the podium for a second week in a row leading music by these two composers who he feels share a “particular combination of poetry and energy.’’ Those words mean less in the abstract, but when the two outwardly dissimilar works were placed side by side Thursday night, there was an undeniable connection, somewhere far beneath the notes.

Harbison completed his Second Symphony in 1987 and titled its four interconnected movements as “Dawn,’’ “Daylight,’’ “Dusk,’’ and “Darkness.’’ The music is so precise and clear in its expressive colorings that the titles feel almost unnecessary, though on some level they help organize the listener’s journey through this work. “Dawn’’ is not sleepy but active, the music accumulating to fill the silence a bit like the way light fills the sky: from the margins. Long sinuous lines eventually rise up from the strings, and suddenly “Daylight’’ has arrived, the music lurching forward in a flurry of sixteenth notes.

Harbison’s “Dusk’’ is a remarkably beautiful stretch of music, guided by a generous yet unpredictable melody in the upper strings and flecked with an accompaniment of uncommon delicacy. The music of “Darkness’’ in the finale builds to a roaring climax, but then glides eerily toward silence. Levine and the orchestra gave a vividly realized, richly communicative performance. Harbison’s entire symphonic day lasted some 23 minutes but passed like an extended blink of an eye.

After intermission, Schumann’s Second Symphony received the kind of wise, vigorous, and all-around dazzling performance I wished the Third had received last week. Better late than never. The playing had all the surface brilliance and virtuosity you could ask for, especially in the brisk Scherzo, but Levine and the BSO players were also able to hone in on — and project — something closer to the music’s expressive core. It was easily the most compelling account of any Schumann symphony the BSO has played this season or in recent years.

As a welcome prelude, the Danish-born violinist Nikolaj Znaider was on hand to perform Mozart’s Violin Concerto No. 3. Here is a genuinely gifted player who I hope returns often to Symphony Hall. His reading boasted musical intelligence, elegance of phrasing, and tonal refinement. It also aptly set the stage for what was to come.