Portland’s Lady Lamb the Beekeeper has Boston all abuzz 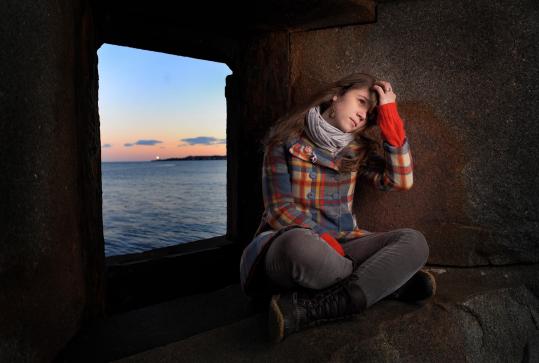 “I’ve been kind of hidden away in Maine, perfecting my music . . . so that I could leave and share it,’’ says Aly Spaltro, whose stage name came to her in a dream. (Fred Field for The Boston Globe)
By Jonathan Perry Globe Correspondent / December 3, 2010

“Lady Lamb the Beekeeper came from a dream,’’ says singer-songwriter Aly Spaltro, explaining the source of her poetic, if slightly strange, stage moniker. Even though she initially had no intention of going public with the homemade song demos she had been recording on an eight-track machine in her bedroom, Spaltro knew she wanted to conjure a musical alter-ego. “I wanted it to be something else,’’ she says. “So it could be my own little secret.’’

“Around that time, I had seen that Richard Linklater movie ‘Waking Life,’ and wanted to try my hand at ‘lucid dreaming,’ ’’ says Spaltro, 21, on the phone from Portland, Maine, which — until this weekend, when she moves to Somerville — had been her home for the last seven years. “I was keeping a notebook by my bed because some part of my unconscious brain was writing lyrics while I was sleeping. I would wake myself up and write things down in the dark, and then try to decipher what I had written.’’

One morning, she checked to see what she had scrawled the night before. “ ‘Lady lamb the beekeeper’ was written down in my notebook,’’ she recalls. “It was so messy that it might as well have said, ‘don’t forget eggs at the store.’ But what it looked like was ‘lady lamb the beekeeper,’ so I couldn’t argue with that.’’ As it happened, the animal-alliterative bit of lyrical fantasia came just as Spaltro was about to title her first homemade collection of songs “The Tingling Circus.’’ “It just stuck,’’ she says.

That conflux of dreams and streams of consciousness put to paper is at the heart of what makes Lady Lamb’s playful, pensive music so arresting. Just as striking are the tools by which she delivers it — with expressively elemental acoustic or electric guitar (and, occasionally, banjo), and a direct, unvarnished voice that can sound simultaneously wise and full of wonder.

It’s a compelling combination that has led to a remarkably rapid rise in New England music circles. Roughly three years after Spaltro performed in public for the first time, playing an open-mike night in Maine to three people, she finds herself playing to packed rooms around Boston and New York. Last month, she performed as part of a star-studded musical tribute to Billy Ruane at the Middle East. (Ruane, the legendary local music fanatic and promoter who died in October, had championed Spaltro’s music as something special.)

Lady Lamb’s next local show is Dec. 16 at the Lizard Lounge in Cambridge. But before that, she’ll be among the performers this Sunday night as part of the 23d annual Boston Music Awards showcase at the Liberty Hotel, having been nominated as Folk Artist of the Year.

“To be honest with you, I don’t consider myself a folk artist,’’ Spaltro confides. “But then again, I wouldn’t be able to tell you what genre I would fit into.’’ All of this before she has even recorded a proper full-length album.

“If [the songs] exist at all, they’re live recordings, simple recordings that I’ve made in my bedroom, so I’m anxious to make a record,’’ Spaltro says. “I’m constantly progressing and trying to reach more people, and I’m honored to be in a position now where people see me and say, ‘Who is this girl?’ and then follow me. Until now, I’ve been kind of hidden away in Maine, perfecting my music and working at it so that I could leave and share it.’’

Still, Spaltro admits she’s a bit worried about going into a real studio and losing the spontaneous spark and charming sense of intimacy that have marked both her shows and homemade recordings. One thing she is reasonably sure of, however, is the quality of her material. “Not only do I have all these songs I play in my set that I want to go on this record, but I have another 35 songs that I think are good enough,’’ she says. “And I keep writing them.’’

For Spaltro, expanding her creative horizons, as well as her audience, has meant paring back. She recently sold all of her possessions — “the only thing I have to my name is my car and everything that fits into it, which are my instruments, some clothes, and a computer’’ — the better to move back and forth freely, and embrace whatever comes next.

“Even though I love it [in Maine] and it’s been my home for seven years, there aren’t a lot of opportunities here for musicians past a certain point,’’ says Spaltro, whose early childhood was spent in Arizona. “I’ve realized that this is exactly what I want to be doing with my life, and if I’m going to make any more headway, I have to leave. So my decision to make my home base in Boston just feels like the good next step. I’m excited and ready.’’

With Angeline, Naked on Roller Skates