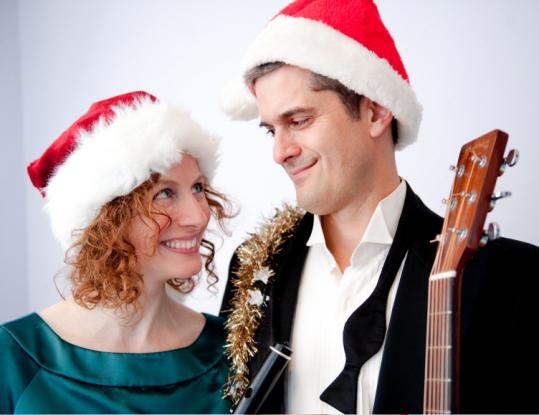 CELTIC YULETIDE Irish tenor and musical theater star Michael Londra — late of “Riverdance’’ — brings the sounds of his 2009 seasonal album, “Beyond the Star,’’ to the stage along with other holiday favorites and stories. Don’t be surprised if he also performs his wildly popular rendition of “Danny Boy,’’ which is at 3 million-plus hits and counting on YouTube. Dec. 4, 7:30 p.m. Tickets: $20. Showcase Live. 800-745-3000, www.ticketmaster.com

ANDREA BOCELLI The internationally beloved Italian tenor’s 2009 album, “My Christmas,’’ was a smash hit, selling 4 million copies. Maybe your mom has one. (I know mine does.) We know that Oprah does. The classical crossover star’s companion PBS special also warmed holiday hearts. He returns to Boston to put his singular stamp on chestnuts as divergent as “Angels We Have Heard on High’’ and “Jingle Bells.’’ Dec. 5, 7 p.m. Tickets: $75-$350. TD Garden. 800-745-3000, www.ticketmaster.com

SONOS Shiver-inducing harmonies seem like a good fit for this most wonderful but chilly season, and this sextet from LA has got the goods. Their intricate vocal stylings — put to work on quirky choices like Fleet Foxes’ “White Winter Hymnal’’ and more conventional hymns like “O Holy Night’’ — should be just the thing to warm up fans of a cappella music. Dec. 5, 8 p.m. Tickets: $13-$15. Club Passim. 617-492-7679, www.clubpassim.org

BEN RUDNICK AND FRIENDS 9TH ANNUAL HOLIDAY EXTRAVAGANZA This jolly gang of children and family performers know the value of music being both good and fun. This year they celebrate the release of their first holiday album, “It’s Santa Claus!’’ Expect to feel that exclamation point if you take the kids to go get down to the band’s rocking takes on Christmas and Hanukkah songs. Dec. 11, 10:30 a.m. Tickets: $8-$10. Regent Theatre. 781-646-4849. www.regenttheatre.com

BLIND BOYS OF ALABAMA Billed as “Go Tell It on the Mountain,’’ this annual Christmas show finds the Blind Boys of Alabama in a festive mood, putting a spirited gospel spin on holiday favorites (“Silent Night’’) and contemporary carols (Harry Connick Jr.’s “I Pray on Christmas’’). And if you like the tunes, you can buy the accompanying Christmas album the group released in 2004, featuring cameos by Tom Waits, the late Solomon Burke, and others. Dec. 11, 8 p.m. Tickets: $30-$42. Berklee Performance Center. 617-876-4275. www.worldmusic.org

MATT & SHANNON HEATON’S “FINE WINTER’S NIGHT’’ This local husband-and-wife duo host their cozy “Fine Winter’s Night’’ annually. But this year’s performance includes a special cameo they couldn’t have had previously: their newborn son, Nigel — playing the role of baby Jesus, of course. Here’s hoping their holiday show of traditional and modern Irish music can make an exception for “Away in a Manger.’’ Dec. 15, 8 p.m. Tickets: $15. Club Passim. 617-492-7679, www.clubpassim.com

TRANS-SIBERIAN ORCHESTRA Like Santa himself, this brawny band of rockers can be counted on to return every year with their big bag of holiday bombast, retrofitting well-known carols, hymns, and songs like “The First Noel’’ and “O Come All Ye Faithful’’ — as well as their own originals — into meaty rock opera opuses. On the group’s website leader Paul O’Neill promises the group tries to have the show “as over-the-top as we can make it’’ with lights, pyro, and video. TSO: They take the holidays to 11. Dec. 15. 7:30 p.m. Tickets: $25-$66. TD Garden. 800-745-3000, www.ticketmaster.com

THE CHRISTMAS REVELS It’s the 40th anniversary of this winter tradition so Revels is pulling out all the stops. The group is taking inspiration for this year’s show from some spectral visitors to its original setting, Haddon Hall. Singing, dancing, poetry, and period music are all on the docket as favorites like “Lord of the Dance’’ and “The Sussex Mummers Carol’’ are revisited. Among those lending a helping holiday hand are the Cambridge Symphonic Brass Ensemble and Happenstance Theater’s Mark Jaster and Sabrina Mandell. Dec. 17-29, various showtimes. Tickets: $7-$52. Sanders Theatre. 617-496-2222. www.revels.org

YULE BALL WITH HARRY AND THE POTTERS If you haven’t sufficiently gotten your Potter ya-ya’s out with “Deathly Hallows, Part 1’’ by next month, grab your broom and get over to this annual Hogwarts-ian holiday fiesta. Along with the adorable headliners you can imagine you’re sipping butterbeer while checking out Draco and the Malfoys, Math the Band, the Whomping Willows, Jason Anderson, and Potter Puppet Pals. (Plus, you’ll be helping in the fight against the “dark arts’’ as $3 from every ticket goes to the Harry Potter Alliance charitable organization.) Dec. 19, 5 p.m. Tickets: $15. Middle East Downstairs. 866-469-7619, www.ticketweb.com

JOHNNY MATHIS CHRISTMAS SPECIAL The perennially smooth crooner has a half-dozen Christmas albums in his discography, so there should be no shortage of material when he takes the stage at Mohegan Sun. And for his fans the holiday season doesn’t even begin until his version of “Winter Wonderland’’ is played. Dec. 19, 7 p.m. Tickets: $30. Mohegan Sun. 800-745-3000, www.ticketmaster.com

A HARMONIC CELEBRATION OF WINTERY SONGS WITH JENNIFER KIMBALL, CATIE CURTIS, MARGARET GLASPY, AOIFE O’DONOVAN & FRIENDS Talk about a supergroup. This formidable lineup of ladies are among the cream of the local crop when it comes to gifted singer-songwriters. Tonight they band together to raise their voices, alone and in harmony, to bring some warmth to the season. We’re not sure what the set list will be, but we’re guessing this group will make some offbeat choices and craft some exciting vocal arrangements. Dec. 19, 8 p.m. Tickets: $16-18. Club Passim. 617-492-7679. www.clubpassim.org

2D ANNUAL ROCK N’ SOUL HOLIDAY CONCERT AND BENEFIT A huge posse of local luminaries is teaming up again to ring in the season with a cup of rock ’n’ soul-spiced eggnog. On the bill are erstwhile J. Geils Band bassist Danny Klein and his smoking party band Full House, the always energetic Fools, songbird Robin Lane, and genre-bending spitfire Casey Desmond, among many others. Proceeds from the show will benefit several children’s arts and cancer charities. Dec. 19, 8 p.m. Tickets: $25-$30. 781-646-4849, www.regenttheatre.com JAMES REED AND SARAH RODMAN