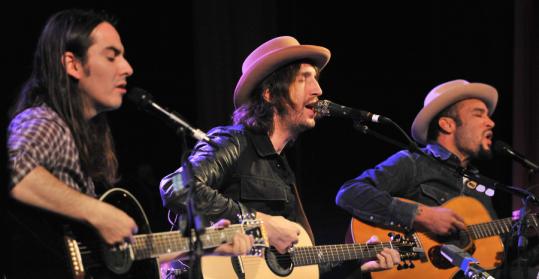 SOMERVILLE — On its recent debut album, Fistful of Mercy — the new collective featuring Ben Harper, Joseph Arthur, and Dhani Harrison — puts a pleasantly off-kilter twist on the Crosby, Stills, and Nash model, embellishing their harmony-saturated folk-rock tunes with ambient and psychedelic fillips. While enjoyable, the record feels a bit too ethereal in places.

In concert Thursday night at the Somerville Theatre, the trio — with a big boost from gracefully simpatico violinist and Sheffield native Jessy Greene — brought the songs of “As I Call You Down’’ to terra firma, fleshing them out and imbuing them with a warm soul over the course of an increasingly riveting, nearly two-hour show.

Voices and guitars interlocking Arthur, Harper, and Harrison ran through songs both rollicking — including blues stomper “Father’s Song’’ — and tender — “Restore Me,’’ often with Arthur not only singing and playing but keeping time on bass drum and tambourine with his feet. Each also performed one song from their respective catalogs.

The trio leavened the sometimes solemn mood of the music with levity, displaying a comic rapport as effortless as their harmony blend. Harrison, son of late Beatle George, joked about the heavy metal bent of the band’s name before launching into its decidedly nonmetal namesake song. Harper and Arthur poked fun at one another and enjoyed back and forth exchanges with the sold-out crowd.

But the music was the main attraction, and the trio played with obvious enjoyment.

Opening act, virtuosic guitarist Alain Johannes, returned to the stage for the stunning encore. The group moved from fierce (a noir-ish blues take on PJ Harvey’s “To Bring You My Love’’), to stark (a shiver-inducing reading of the Velvet Underground’s “Pale Blue Eyes’’), to funky (their own disco-roots mash-up “Scandalous’’).

The night was capped with a truly unplugged moment. Lining the front of the stage, guitars in hand, they sang, sans amplification, their optimistic ode to friendship “With Whom You Belong,’’ successfully coaxing the crowd to sing its refrain “I hope you find friends with whom you belong.’’ Clearly, the gentlemen in Fistful of Mercy have done just that.