Hardcore fans turn out for Erickson 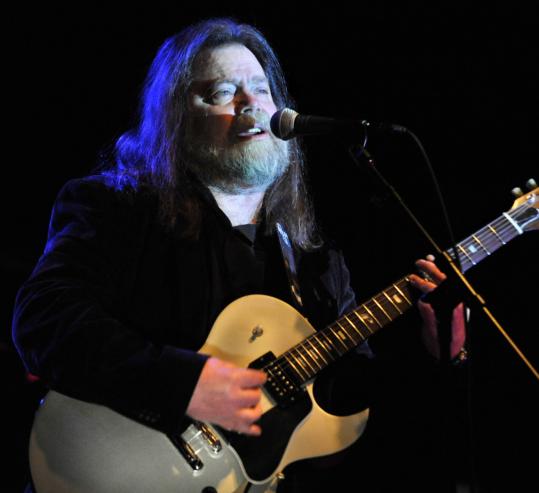 Pioneers of acid rock, the Texas-based 13th Floor Elevators seldom traveled east of Austin before crashing in the late 1960s due to heavy drug use and legal woes. But the band’s recordings and its dynamic lead singer, Roky Erickson, built a hardcore fan base in some unlikely places, including the Harvard College campus, before the Elevators derailed forever. Erickson became the most visible victim of the band’s demise, serving three years in a state hospital for the criminally insane. Saturday night’s show at Royale marked his first-ever Boston appearance, a long, strange trip indeed for a cult figure worshiped by artists like R.E.M., ZZ Top, and Julian Cope.

Erickson has actually made several comebacks since, beginning with his punk-inflected, horror-rock recordings of the 1980s. Yet there have been numerous setbacks, too, as chronicled in the documentary film “You’re Gonna Miss Me.’’ The release this year of “True Love Cast Out All Evil,’’ a spare, haunting disc recorded with Okkervil River, captured a different side of the singer-songwriter, more quietly contemplative if no less beset by inner demons.

The Erickson who took the stage Saturday might be described as Old Testament Roky. Long-haired and bearded, noticeably stockier than just a few years ago, he rasped and growled his way through a set list heavily culled from his “Bleib Alien’’ days: songs like “Bloody Hammer,’’ “Two-Headed Dog,’’ and “Don’t Shake Me Lucifer’’ (“Well, they’re rocking in Hades/ They’re rocking on the elevator up’’). Backed by the youthful power trio of guitarist Kyle Ellison, bass player John Michael Dayspring, and drummer Kyle Schneider, Erickson was a commanding presence, to be sure, if not an especially communicative one. He never spoke onstage and often turned his back to the crowd when he wasn’t singing. Given all that Erickson’s been through, perhaps that’s understandable. Legends do not owe their audiences much beyond showing up, after all.

The band closed with “You’re Gonna Miss Me,’’ written and recorded by Erickson while in high school. It later became the Elevators’ one and only commercial hit, at once a demonstration of Erickson’s astonishing vocal prowess and unlike virtually every other song in his old band’s LSD-laced repertoire. “Boston loves you, Roky!’’ someone in the crowd called out. Well, sure. Forty-odd years is a long time to wait to consummate a long-distance romance.

Opening was the Lyres, whose lead singer, Jeff Conolly, is an unabashed Elevators fan. The band tore furiously through a high-energy set that was every bit as slick as the sweat dripping down Conolly’s face. At times, he even sounded like a younger, more vocally supple Roky Erickson. Wonder where he got that from?

ROKY ERICKSON With the Lyres