A confident and dramatic Discovery performance 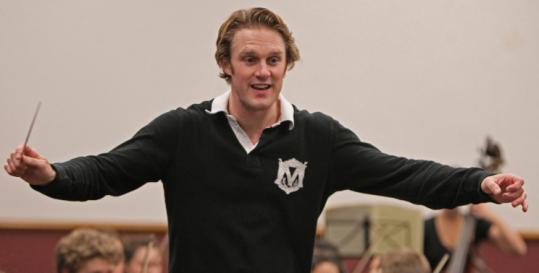 CAMBRIDGE — Among Boston’s burgeoning ecosystem of younger, entrepreneurial classical music groups, the Discovery Ensemble and its director, Courtney Lewis, have carved out a niche by cultivating a certain brash suavity, an insistent flamboyance that pulls the listener into their dapper conspiracy. Their program at Sanders Theatre on Friday was an ideal vehicle — music regarding the grand tradition with casual confidence, and even a little insouciance. The result was smart, flattering tailoring.

In his 2006 “Three Studies From Couperin,’’ the British composer Thomas Adès, a deft purveyor of glittering attitude, takes character pieces by the French Baroque master and orchestrally pushes them slightly out of focus. “Les Amusemens’’ is rendered in smudged charcoal, all thick strings and low winds, against a background rumble of marimba. “Les Tours de Passe-Passe’’ gets the haze of lens flare, scattered, bright fragments that coalesce into a climax. “L’Âme-en-Peine’’ makes a gently somber conclusion, a build-up of dark-hued washes. The performance was judiciously balanced, velvety sound drawn in graceful arcs.

Where the Adès aimed for a soft blur, Igor Stravinsky’s Concerto in E-flat (“Dumbarton Oaks’’) reimagines its inspiration — the Brandenburg Concerti of J. S. Bach — in heightened, razor-sharp focus. The concerto is like the Baroque in HD, lovingly zooming in on every pore and wrinkle. Rhythms are filtered through a grid of deliberate complexity, a further layer of playful disorientation — Lewis’s beat was a vigorous semaphore that occasionally pulled his physical presence off balance. But it produced sure-footed playing, the group finding a confident, easy way with Stravinsky’s fractured-jazz swing.

Having entertainingly dispatched such bad-boy refinement, the ensemble then turned to a quintessentially refined bad boy, giving a thoroughly distinguished performance of Beethoven’s Sixth Symphony. The familiar sylvan pictures were painted with warmth and sweeping brio; one of Lewis’s favorite gestures was, appropriately, reminiscent of the old trick of cleanly pulling a tablecloth out from under the dishes. Everything had plush momentum and accomplished exuberance. The only quibble was in the finale, where Lewis’s dramatic flair got the better of his sense of structure — the music got very big very fast and had nowhere left to go. For the most part though, there was sufficient energy and dash to err on the side of articulate gregariousness. Discovery’s panache can go a long way.