Reveling in the Hendrix experience

Vai, Tedeschi, and others join tribute to guitar legend 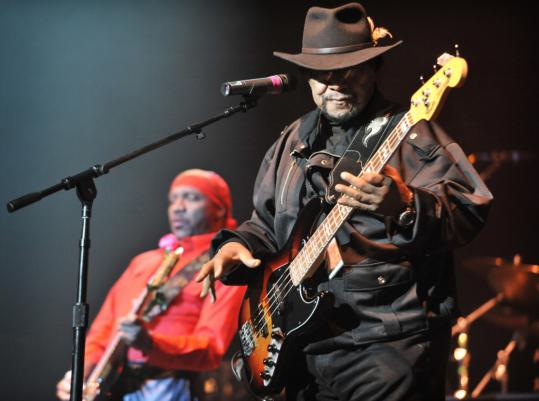 Among those performing in the “Experience Hendrix’’ showcase Sunday night at the Orpheum were Billy Cox and Ernie Isley (background). (Josh Reynolds for The Boston Globe)
By Scott McLennan Globe Correspondent / November 9, 2010

It doesn’t take a dozen exceptional guitarists to extol the virtues of Jimi Hendrix. But having that many certainly makes for a great show, as was the case Sunday at the Orpheum with the “Experience Hendrix’’ concert.

Isley, an early supporter of Hendrix, and bassist Billy Cox, who was in both the Experience and Band of Gypsys, brought historical heft as they teamed for the opening salvo of “Stone Free’’ and “Message to Love.’’ Cox reminded the packed house how Hendrix rested his unparalleled guitar architecture atop a steady foundation of blues and soul. Isley, best known as an R&B player, showed how Hendrix opened up new possibilities for guitarists, and he demonstrated with a mind-melting rendition of “Manic Depression.’’

Living Colour captured Hendrix’s brash showmanship. A crazed “Crosstown Traffic’’ found singer Corey Glover prowling the aisles and balconies of the theater, with bassist Doug Wimbish in the floor seats and Reid letting loose screams and howls from his guitar.

Drummers Chris Layton from Double Trouble and Will Calhoun of Living Colour manned the kits throughout the night, and when Cox wasn’t playing, the bass was handled in turns by Wimbish and Scott Nelson, from Shepherd’s band.

Tedeschi’s performance showcased the elegance of Hendrix’s songwriting. She teamed with Johnson to tackle the wistful “One Rainy Wish,’’ then moved on to the psychedelic poetry of “If 6 Was 9’’ and “Spanish Castle Magic,’’ tunes that summoned Aerosmith’s Whitford and Indigenous’s Nanji for additional guitar firepower, though Tedeschi delivered some of the toughest solos of the lot.

Lang, using the night’s only acoustic guitar, and Whitford crafted a majestic version of “All Along the Watchtower.’’ Shepherd tapped both “Voodoo Chile’’ and “Voodoo Child (Slight Return)’’ to highlight Hendrix’s influence on modern blues. Vai’s note-packed performances reminded how high Hendrix set the bar for those wanting to be impressive soloists.

Vai, Reid, and Randolph engaged in ebullient jamming during “Love or Confusion’’ and “Foxy Lady,’’ and Cox, singing and playing bass, brought the show home aptly with “Red House.’’

Scott McLennan can be reached at smclennan1010@gmail.com.