‘Give Thanks’ joins Vaughan Williams pieces 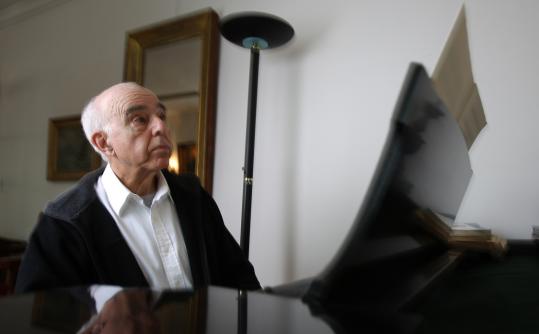 In recent years the Cantata Singers have been honing a successful approach to programming, building each season around an exploration of a single composer’s work. Instead of attending “just another concert,’’ listeners are invited to participate in a larger artistic journey, an extended process of reckoning with a particular 20th-century master. Past seasons have focused on Weill and Britten, while this season the chorus and its allied ensemble are taking on the work of Ralph Vaughan Williams.

Two seldom-heard Vaughan Williams works — the Oboe Concerto and “Flos Campi’’ — anchored Friday night’s program in Jordan Hall under the baton of music director David Hoose. Yet as in past seasons, the title composer frames the discussion but hardly dominates it. In this case, the news of the night was the unveiling of a significant, capacious new work for chorus and orchestra by the distinguished Boston-based composer Yehudi Wyner entitled “Give Thanks for All Things.’’

The title bespeaks a sense of autumnal gratitude, which is certainly a theme of this engrossing work, but also only part of the picture. Wyner, who celebrated his 80th birthday last season with tributes across the city, has a knack for composing against the grain. As he explained in a preconcert lecture, he had recently been feeling “sick of high-flown rhetoric’’ and instead wanted to find a text that could make for a “comic cantata.’’ It never materialized, so Wyner instead turned to a stack of poems he had put aside over the years, incorporating several into the frame of his new work together with a setting of two biblical Psalms (Nos. 148 and 150) and Richard Wilbur’s “Psalm,’’ from whose opening line the piece derives its title.

Wilbur’s poem begins with thanks ringing out on “plucked lute’’ and “lifted horn’’ but it quickly takes a somber turn toward “a cello of shared grief.’’ Wyner’s work, too, turns in on itself as the exuberant energy of the opening gives way to meditations on death and ultimate things, with help from Shakespeare, and in a most imaginative treatment, Whitman (“Dirge for Two Veterans’’). At the emotional core of the work are three distinct settings of a touchingly simple fisherman’s prayer: “Dear Lord be good to me. The sea is so wide and my boat is so small.’’

The first time the prayer appears the choral writing is fractured, a kind of fragile quivering music that is almost dispersed by a burst of pulsating brass. The setting captures the primal sense of awe, fear, and wonder one may feel before the vastness of the sea. But it is the prayer’s third and final return that is the most arresting, as Wyner clears out the chorus and the orchestra and assigns the text to a soprano soloist supported only by violins. The blend of treble sonorities lends a sense of weightlessness while the stripped-down elegance of the writing captures the core humility of the prayer. The lines float and weave around each other with a dark beauty, as if lit from within.

The Cantata Singers under Hoose gave a fine, committed performance, with Karyl Ryczek, Lynn Torgove, and Mark Andrew Cleveland as vocal soloists. Wyner’s work was preceded by Vaughan Williams’s “Flos Campi,’’ a strangely bewitching piece with its own sui generis sound world, defined by a viola ruminating against the backdrop of a small orchestra and a wordless chorus. William Frampton dispatched the viola part with a singing quality and a glowing amber tone. Peggy Pearson was the superb soloist in the Oboe Concerto. Also on the program was Andrew Imbrie’s “On the Beach at Night,’’ a marvel of knotted lyricism, and Irving Fine’s “The Choral New Yorker,’’ in a deft orchestration by Hoose.