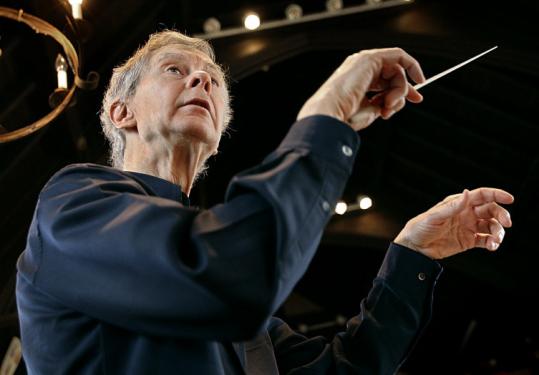 It was a fascinatingly incidental start to the New England Philharmonic’s season on Saturday, at least in part; under music director Richard Pittman, the orchestra gave the Boston premiere of a piece that seems to dare to hang together on its own disparity. Henri Dutilleux’s 2003 song cycle “Correspondances’’ is a loose orbit of texts — Rilke brevities, letters from Solzhenitsyn and van Gogh, a Prithwindra Mukherjee hymn to Shiva — of styles, even of instruments, the orchestra dividing and reforming in mutable combinations. But that may be the point, the words and music paralleling the way the psyche imposes patterns and metaphors on the continuous jostle of experience, as Rilke put it, “the strange harmony of infinity’s tide.’’

Dutilleux’s consummate sense of harmony is the thread tying “Correspondances’’ together, dissonant edges tiled into lush mosaics, claiming direct descendance from the Impressionist tradition. The melodies find lyricism on their own terms, whole-tone scales and swift leaps pushing slowly, climbing lines into uncharted territory. Soprano Sarah Pelletier was excellent, spinning out effortless, supple clarity, alive to both the text’s poetry and flow. The orchestra was at times more a competitor to the voice than a collaborator, but its wall of sound was vibrant and rich, a solid reading of a deep score.

Given the virtue “Correspondances’’ makes of the tangential, it had a fittingly tenuous connection to the rest of the program, which concentrated on more focused landscapes. Chris Sainsbury’s “First Light,’’ an American premiere, placed a clashing flock of Australian birdcalls over episodic, cinematically tonal ground, dotted with vivid orchestral touches: a distant buzz of muted trumpets, steely piano, velvety dollops of low brass.

The concert’s natural thematic center was Gunther Schuller’s 1975 “Four Soundscapes (Hudson Valley Reminiscences),’’ a palpably atmospheric evocation of the Hudson River’s environs. The opening movement is an homage to Charles Ives — rolling clouds of sound — but the whole displayed an Ivesian cast: ragtime echoing through layers of mellow dissonance, events and images bleeding into each other, multitudes captured in a subjective frame — the soft, blurry density of memory.

Robert Schumann’s Symphony No. 3, another river travelogue (in this case, the Rhine), was a logical companion, but the program’s bulk perhaps took a toll on rehearsal: the performance was often heavy-footed and almost continually ragged. The best moments were the most sun-dappled, the faux-folk scherzo and the bouncy finale, when the group’s enthusiasm, however rough-edged, dovetailed with Schumann’s own.