Covering all the basses 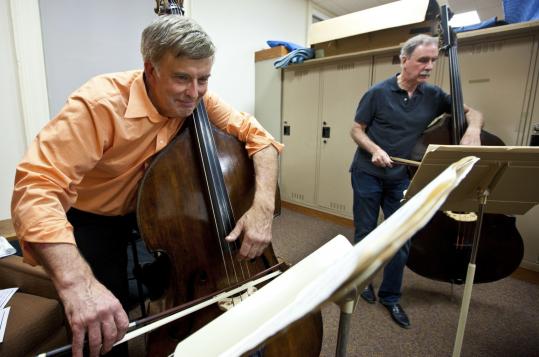 New England Conservatory is in the midst of observing the 85th birthday of Gunther Schuller — composer, performer, jazz scholar, former president of the school, and all-around eminence grise. Among the works slated for performance in his honor, one of the most unusual will be heard at NEC’s First Monday concert next week, at which the school’s four bass teachers will haul their instruments onto the Jordan Hall stage for a performance of his Quartet for Double Basses, written in 1947.

If you’ve never heard of a piece for four double basses, you’re not alone. As is known to anyone who’s played the instrument — this writer did so in a former lifetime — the amount of music that brings the bass out of its accustomed role in the depths of the orchestra is small, especially in comparison to its higher-pitched relatives in the string family. Its low range, huge size, and sheer unwieldiness make the idea of an expressive, virtuosic piece of chamber music for a quartet seem downright strange.

Or, as James Orleans, one of NEC’s bassists, put it, “Almost everything on the bass is formidable. It’s hard enough to play without having formidable passages to learn.’’

And Schuller’s three-movement quartet is nothing if not formidable, according to the bassists who are taking part in Monday’s performance: Lawrence Wolfe, Donald Palma, Todd Seeber, and Orleans.(All except Palma are also members of the Boston Symphony Orchestra.) “It’s one of those pieces where standards were a little different when he wrote it,’’ said Wolfe. “But the standards rose to meet the music that challenged them.’’

In a program note, Schuller noted that when he showed the piece to “a well-known bass player’’ in 1948, it was deemed unplayable and shelved until its first public performance, a dozen years later. Now, in the rarefied world of double bass training, the quartet is a rite of passage that every player at a certain level has to tackle.

“It’s musically and technically challenging, and it’s good music,’’ said Palma. “Gunther has created a unique sound world out of four basses that I don’t think anyone has duplicated in the 63 years since it was written.’’

“Big, solid, colorful gestures,’’ said Wolfe when asked to describe the music. “Exciting rhythmic punctuations. [And] there are all manner of modern jazz chords, as well as wonderful high style.’’

That’s a decent shorthand for Schuller’s musical language and its diverse sources. One of those sources is openly acknowledged in the quartet: The first chord of the piece is identical to the basses’ final chord in the fourth of Arnold Schoenberg’s epochal “Five Pieces for Orchestra,’’ from 1909. “I can kind of picture [Schuller] looking at this chord and saying, ‘Wow, that’s a great way to start my quartet,’ ’’ said Palma.

One of the things that makes the piece especially challenging is that each player must retune one string of his instrument after the first movement. “That’s how Gunther solved the problem of using the harmonics and open strings to create a kind of new sonority,’’ Palma said.

But retuning a double bass on short notice is a tricky business. “As soon as you tune one string, it throws the one next to it off a bit because of the tension on the belly of the instrument,’’ explained Wolfe, so it takes some time to get all four instruments ready for the second and third movements of the piece.

“Everyone has to sit through a fourth movement called ‘Tuning,’ ’’ Orleans quipped.

The rewards of the effort are in the third movement, in which there is an eight-note chord that Orleans calls “just the most eerie and wonderful thing.’’ What follows is a series of rapidly changing pitches played in harmonics, the high tones that string players produce by placing a finger lightly on the string. Each of the NEC bassists independently named this moment as one of the hardest in the piece. “It really is hard to bring that off in a way that doesn’t just sound like a bunch of scrambling,’’ Orleans said.

In spite of the challenges, all described the quartet as highly rewarding to play. Palma said that years ago in New York, he formed a bass quartet to play the piece. They had other composers write works for them, but, as he said, “We always thought it came back to Gunther’s piece. That was kind of the Beethoven 5 or the Brahms 2 on most of our concerts.’’

Added Orleans: “It’s one of those things that reminds you what a comprehensive effort it took to learn the instrument in the first place. When I was a student I practiced between six and 10 hours a day. I don’t do that anymore, but for this piece, it’s brought me back to my student days. It’s good to touch base — no pun intended — with those learning experiences.’’

New releases
Two new recordings from performers soon to visit Boston are deserving of mention. Pianist and conductor Christian Zacharias has just released the sixth volume in his ongoing series of Mozart concertos with the Chamber Orchestra of Lausanne (MDG). The performances of Concertos 14, 15, and 21 are brisk, lucid, and well-organized. They’re also rather reserved, but the elegance of Zacharias’s playing and leadership is hard to argue with. He plays with and conducts the Boston Symphony Orchestra Nov. 11-13.

And the intrepid wind quintet known as Imani Winds recently put out “Terra Incognita,’’ with lush, beautiful performances of new works by jazz composers Jason Moran, Wayne Shorter, and Paquito D’Rivera. Shorter’s lengthy and mysteriously beautiful title track is especially involving, and everything is played with deep energy and commitment. The group plays at the Isabella Stewart Gardner Museum on Nov. 7.