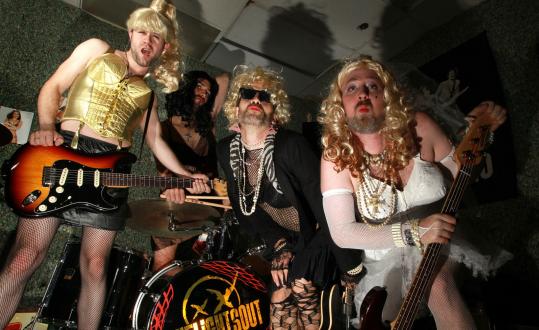 Some say Christmas is the most magical time of year, but our money is on Halloween. Every year around this time, kids get to play dress-up for the night and pretend to be what they’ve always dreamed of: a robot, a vampire, Spider-Man, Justin Bieber. Thus, it only makes sense that Boston rockers break out their face paint and leather pants to pay tribute to their favorite bands. Here’s a selection of some of the Halloween-inspired cover shows going on around town this week.

Members of Noble Rot and Bang Camaro as Motörhead; Buried in Leather as the Misfits; members of Panzer Bastard as Black Sabbath Since his band Noble Rot has played Motörhead covers in the past, it didn’t seem like much of a stretch to go all in, says Richie Hoss. “I remember someone saying that it was like going to a church where they knew all the songs.’’ That’s part of the appeal of a show like this. “Bands get to step outside their normal 12 songs and do something different on a night where bands are, shall we say, less ‘career minded’ and more ‘fun minded.’ They get to play the songs that inspired them to write the songs that they write.’’

BrownBoot as the Faces; John Powhida as Todd Rundgren; Preacher Roe as Guided by Voices; the Gilded Splinters as the Rolling Stones His real band formed as the result of a previous Black Crowes tribute night, says BrownBoot’s Rodrigo Van Stoli. He keys in one of the best parts of playing a show like this: Everyone already likes the songs. “I think it’s because it’s so much fun to step out of your songwriting shoes and do something that has immediate acceptance. Provided you do it well, of course.’’ And it doesn’t hurt that they already sound like the Faces anyway, he says. The look? Not so much. “I believe my only accessory will be a cravat. And maybe a soccer ball.’’

Members of Tijuana Sweetheart and the Information as the Misfits; members of Raw Radar War, Tired Old Bones, and Doc Hopper as Black Flag; members of Razors in the Night and the Appreciation Post as Face to Face; Jack Burton vs. David Lo Pan as Refused ; members of the Dents, Capital Radio, Doomriders, and Hallraker as the Descendents

Dealing with crowd expectations of cover songs by beloved bands can be tricky, says Raw Radar War’s Jonah Jenkins. “Personally, I try to just perform as I would like to see these songs performed.’’ For his set covering Black Flag, that means “tempering some of the cliches that Henry Rollins was known for, and amping up the energy levels on some songs.’’ But it’s most important to capture the spirit of the song. “We don’t want to turn these into anything different from what we love about the originals.’’

The Honors as Morrissey ; Bearstronaut as the Rapture ; Vostok 4 as Talking Heads

“We chose the Rapture because they were one of the few bands that we all listened to when we started Bearstronaut,’’ explains guitarist-vocalist Dave Martineau. With an inspiration like dance-punk progenitors the Rapture, and with the expectations that come with playing the enduring retro-rock dance night the Pill, matching the band’s live feel is key. “The Rapture’s energy is incredible. I think for a show like this, you have to try your best to capture the band’s sound and style while still making it your own.’’

The Lights Out as Madonna ; Midatlantic as Lady Gaga ; the Luxury as the Go-Go’s ; the Hot Protestants as Britney Spears

Topping their performance as Phil Collins last year was going to be a tall order, says bassist Matthew King of the Lights Out — the members of which will appear this year as four different iterations of Madonna. “These shows are the most fun when everyone in the crowd knows all the songs,’’ he says. “Madonna has a ridiculous catalog of hits, so that base was covered.’’ It takes about a month to get a set like this down. “It’s totally worth it because it not only gets our fans excited, but we get the freedom to be someone else for a change.’’

Halloween shows like this go beyond just being a Boston tradition, says the Sneaks’ Johnny Arguedas. “Right now pop culture is in a nostalgic phase. There’s a reason movie remakes are so prevalent, it’s easy to tap into the familiar in order to evoke interest.’’ Nostalgia isn’t easy; he’s enlisted seven musicians to help flesh out the beloved alt-country band’s sound. “It may be just one night of music . . . but being able to re-create the music gives me a deeper appreciation of the source material.’’ That their version of Wilco happens to be zombies is an added bonus. “Yes, it’s corny, but Halloween itself is a little corny. That’s what makes it so fun.’’

SuperVolcano as MGMT ; Streight Angular as Passion Pit ; A Bit Much as Ziggy Stardust ; PFM as Radiohead ; Whores at the Door as the Pixies ; Deezy and the Brobots as Weezer ; Birdorgan as the Residents

“It’s fun to pretend to be your idol for a minute,’’ says Ashley Willard, of Whores at the Door. In this case that idol would be the Pixies’ bassist-vocalist Kim Deal. “It’s a chance for everyone to let go of the more serious full-time focus on their original music and just have fun. And we’re all a bunch of attention whores, so we’ll do anything that puts us on a stage in front of people.’’

Playing songs everyone already likes is one thing, but exposing people to your under-appreciated favorites, like Ween and Mclusky, is what motivated Brian Rusnica of the New Dumb. Even still, he says, the pressure is on. “Boston’s music fans are really knowledgeable. They know their details and I think they appreciate the nuances that bands can put on their performances when they’re emulating something so completely.’’