Harmony, heartache, and Lady A

Band crosses over to the big time 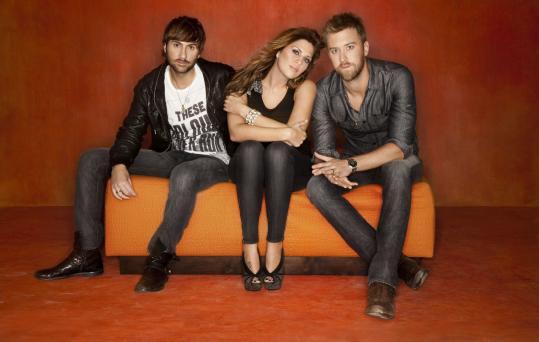 Hillary Scott would be well within her rights to brag. Alongside her singing and songwriting partners Charles Kelley and Dave Haywood in the contemporary country trio Lady Antebellum, she has enjoyed an exceedingly good year. In the past 10 months Lady A has watched its sophomore album, “Need You Now,’’ debut at No. 1 on the Billboard albums chart on its way to selling 3 million copies, won a Grammy, toured with Tim McGraw, and just recently received five nominations for Country Music Association awards, including the big prize, Entertainer of the Year. Not too shabby for a band formed four years ago after a chance meeting between Scott and Kelley.

The group is in the midst of its first headlining tour, which stops at the Agganis Arena Thursday, and, if industry prognostications are correct, a raft of Grammy nominations will serve as icing on the cake in December.

“I say this all the time to my friends: Everyone has a right to be proud of their accomplishments and be passionate about what they do, but I think the only people who really have a right to brag are those who are trying to find the cure for cancer,’’ says Scott with a chuckle, on the phone from a Jonesboro, Ark., tour stop.

Lady A may not be curing cancer but, like many gifted musicians before them, the Nashville-based trio has managed to find at least a temporary cure for the common heartache, especially in the title track of “Need You Now.’’ In 4 1/2 softly country-rocking minutes, they distill the universally known ache that leads to boozy booty calls.

“If anything, we just want to write songs that we believe in and are proud of and have lived and this was one of them,’’ she says of the tune, which crossed over to the Top 40 and adult contemporary charts. “The only thing I can think about it is, lyrically, it’s just not genre-specific. Being desperate and a little tipsy and calling the person that you love more than anything, it doesn’t really matter what kind of music you like, I think everyone’s been there.’’

That relatability coupled with the group’s warm harmonies, ability to bring something fresh to the Music City formula, and quirky-but-telegenic two guys-and-a-gal lineup has won them fans within and without Nashville.

“I think it’s great to have a fresh face in pop music that’s waving the country flag,’’ says Jennifer Nettles of Sugarland, who shared the stage with Lady A on Kenny Chesney’s stadium tour last summer. “Anytime any group within the genre can step out and bring people over, it’s healthy and should be celebrated.’’

“We saw them at the Grammys and we thought they put on a great performance,’’ says Maroon 5 keyboardist Jesse Carmichael. So great that when the slinky pop funkateers found themselves writing the country-flavored “Out of Goodbyes’’ for their latest album, “Hands All Over,’’ they decided to make it a duet. “We reached out to them because they are sort of like the contemporary version of our band in the country world.’’

Scott knows Lady A has been fortunate with crossovers and collaborations but is especially grateful for the number of songs it’s been able to place on its albums. In a genre well-known for pressuring artists to go with established songwriters, it’s a real coup that the trio co-wrote seven of 11 tracks on “Need You Now,’’ and 10 of 11 on its eponymous, platinum-selling 2008 debut. Scott believes that Lady A may be part of a wave of young artists rewriting the rules, one hit song at a time.

“We get asked a lot about how country music is changing, and that honestly is the first thing I say,’’ she says. “Country music has always been filled with artists who write their own songs. But I think in the ’80s and ’90s it went through a phase where everyone was recording songs written by other songwriters; which gives those songwriters great success and a way to provide for their families, but I think the fans also love to hear what the artist has to say from the artist’s mouth. And that’s, I think, one of the reasons why Taylor Swift has done such an amazing job and has been so successful, because she’s baring her heart to her fans and it’s so relatable.’’

For that reason Scott savors the songwriting-related CMA nominations and the fact that Sara Evans is releasing a song Scott co-wrote as the first single from her new album. “Those are the things that are honestly almost more exciting than anything. Because I’m like, ‘Oh my gosh, another artist I respect and love so much liked a song I wrote enough to record it!’ ’’

Those thoughts are certainly easier for Scott to entertain than thinking about Lady A’s competition in the Entertainer of the Year category, which includes big names like Brad Paisley and Keith Urban, friend Miranda Lambert, and fellow fresh faces the Zac Brown Band.

“That one caught us off guard, for sure,’’ she says with a laugh. “This is our first headlining tour, so to be nominated in that category, we’re like, ‘Are you sure?’ We kind of don’t feel like that’s us yet. But it’s great that people within the industry think that that’s something that we were worthy of a nomination of. I don’t think we have a chance at winning it, and that’s OK. But we will take it and the company that we get to keep.’’