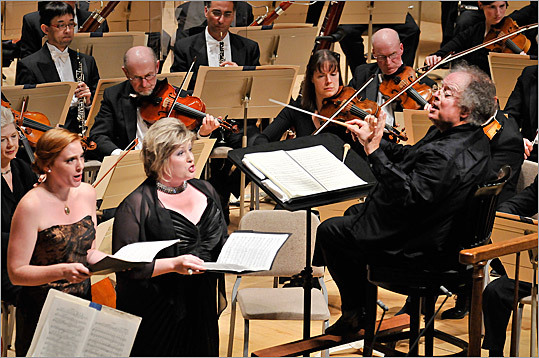 James Levine’s return to active leadership at the Boston Symphony Orchestra was ratified last night at the season’s opening subscription performance in Symphony Hall. For the first time this season, the conductor entered from the wings carrying a cane, which upon reaching the podium he neatly leaned against the railing. Then, as if to suggest how little his manner of entrance mattered, he proceeded to unfurl a magisterially paced, sweeping performance of Mahler’s Second Symphony.

Levine’s Mahler outings with the orchestra have been consistent highlights of his tenure in Boston, but until now the conductor had never led the BSO in the composer’s epic Symphony No. 2. The work begins with an enormous funereal movement and ends with a choral finale that Mahler’s chief biographer aptly described as “a huge apocalyptic fresco of doomsday.’’

Last night, the first movement seemed to benefit from the strongest execution. Levine secured its rhythmic motor first by lavishing attention on the marchlike figure in the cellos and basses, but he also drew out the lyrical second theme with a spaciousness and sweetness that made it feel touched with a few rays of the “Urlicht’’ or “primal light’’ of the fourth movement.

It was more generally in this first movement that the conductor’s mastery over Mahler’s peculiar symphonic topography seemed the most clear, his gift for drawing out the inner life of certain micromoments, while never forgetting how they fit into the larger Mahlerian wilderness. Before several climaxes, Levine stretched the tension in the musical line right up to its breaking point but never beyond.

This work’s stirring fourth movement demands an almost impossible blend of qualities from the vocal soloist, and at least last night, mezzosoprano Karen Cargill did not really possess it. Especially in her lower dynamic range, an excess of vibrato obscured the center of the pitch, as well as the expressive core of the vocal line itself.

The finale boasted some exceptional playing from the orchestra, including some glowingly articulate trombone work and some remarkably eloquent woodwind blends. The Tanglewood Festival Chorus sang with moving clarity, and the capable soprano soloist was Layla Claire. After all the fury and sheer sonic violence Mahler writes into his score, the chorus’s gentle hushed entrance is always a magical moment. Last night Levine prepared it beautifully, with a cordon of deep silence.