Tallest Man on Earth is a player with range 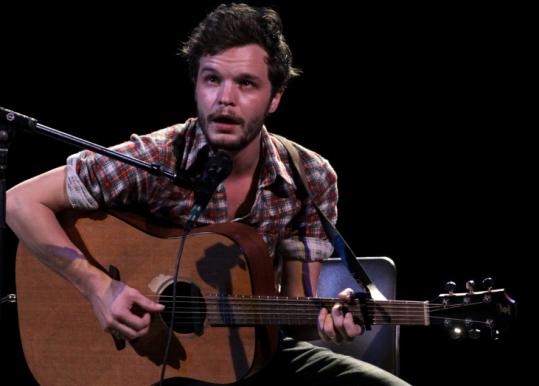 When a musician makes records that are little more than an uncanny voice and a deftly picked guitar, like post-folk troubadour Kristian Matsson, who plays under the name the Tallest Man on Earth, it can be tempting to beef up the arrangements for the touring context. But on Friday night at the Somerville Theatre, Matsson proved a backing band is an extravagance he can live without in a captivating, charismatic solo performance.

Based on the slew of praiseworthy international press for the 27-year-old Swede, it seems that any article about the Tallest Man on Earth is required to address two questions: Just how tall is he, and how much does he sound like Bob Dylan? (Not very, and quite a bit.) For folk purists it would be easy to disparage Matsson’s picking style and off-kilter vocal cadence as tipping the scales of Dylan-esque all the way into mimicry, but if one followed that dismissive line of thinking about contemporary music it wouldn’t leave much else to talk about. Lesser artists than Matsson have withstood more strenuous harrumphing. It’s not the framework of the architecture that matters, it’s the living that goes on inside the house once you’ve got it built. That said, the gently plucked, plaintive “Like the Wheel’’ or “The Wild Hunt’’ could have been pulled directly from old Bobby’s songbook. That pastorally meandering style is only one of the modes Matsson put on display, the second being evidenced in the full-throated, hard-strumming bounce of songs like the triumphant “King of Spain.’’

With a pocket full of skewed poetry, a throat full of gravel, and an arsenal of alternately tuned guitars, Matsson, who resembles a Swedish, elven John Mellencamp, whispered and wailed tales of heartbroken, offbeat characters drawn largely from his most recent records, “The Wild Hunt’’ and “Sometimes the Blues Is Just a Passing Bird.’’ On songs like “Love Is All’’ he picked out cascading loops of notes, the guitar melody echoing his scarred-vocal and forlorn lyric. “Well I walk upon the river like it’s easier than land,’’ he sang. “Evil’s in my pocket and your strength is in my hand.’’ Matsson’s strength is rather in his own dexterous hands, and in his voice too.

Luke O’Neil can be reached atlukeoneil47@gmail.com

THE TALLEST MAN ON EARTH With S. Carey

At: the Somerville Theatre, Friday