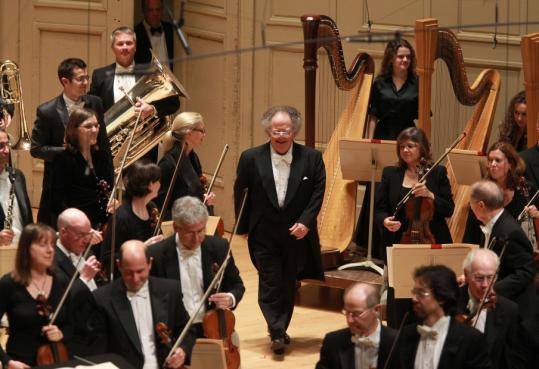 After a trying seven-month absence, James Levine made his long-awaited return to the helm of the BSO Saturday night at Symphony Hall. At 6:14 p.m., the conductor emerged onto the stage and the full hall rose to welcome him back. He placed his hands over his heart to show his thanks. And then, as if to underline the sentiment, he led a thundering all-Wagner program of orchestral and vocal excerpts, with help from the superb bass-baritone Bryn Terfel. Opening night gala programs are not typically known for their musical substance, but this was easily the most artistically rewarding season-opener I have attended in Symphony Hall.

The stakes, of course, could not have been higher. Levine’s health problems have been grueling, first and foremost, for the conductor himself. But they have also tested the patience of concertgoers, orchestra players, and the BSO administration. The city’s musical public needed a strong return from its maestro, and he did not disappoint.

Levine walked in from the wings cautiously but without support. Once he mounted his signature swivel chair and gave the downbeat to the Act I prelude of “Die Meistersinger,’’ he looked delighted to be back in front of his orchestra, conducting with a vigor and zeal unseen since before the latest round of back problems.

This Wagner evening was conceived long before his April operation, but in the end it proved an ideal program on which to ride back into Boston. Over his four decades at the Metropolitan Opera, Levine may have led more Wagner performances than any conductor on the planet. He knows the scores cold, but also knows how to bring them across with maximum dramatic impact.

The “Meistersinger’’ prelude is sweeping, majestic music and the orchestra played it with a sense of occasion. Tempos were broad and stately, the brasses dispensing warm ribbons of sound. Phrasing overall might have been more chiseled but the performance had electricity, with Levine masterfully pacing the expressive climax near the prelude’s close.

From there, Terfel came out with Hans Sach’s Act II monolog, “Was duftet doch der Flieder.’’ The bass-baritone was in excellent voice, burnished and strong but with the inwardness and sensitivity required to carry off this delicate, ruminative passage in which the cobbler reflects and dreams aloud into the night. Levine the accompanist was there at every turn, deftly shaping the BSO’s glowing strings or its piquant woodwinds around Terfel’s vocal line.

This was the pattern for the night, as another two vigorously dispatched orchestral excerpts — the famous “Ride of the Valkyries’’ from “Die Walküre’’ and the Overture to “The Flying Dutchman’’ — were paired with vocal passages from their respective operas.

Terfel, who is singing the role of Wotan in the Met’s new production of “Das Rheingold,’’ was particularly commanding last night in Wotan’s Farewell from Act III of “Die Walküre.’’ While barely moving his arms from his side, he projected a nuanced and deeply felt portrait of the conflicted god preparing to punish and bid a final goodbye to his favorite daughter, Brünnhilde. This excerpt ended, after the casting of the so-called magic fire, with Terfel at his most stentorian, his bass-baritone penetrating sheets of full orchestral sound to earn a midprogram ovation.

He was equally impressive in the Dutchman’s monolog (“Die Frist ist um’’) telegraphing both the quiet world-weariness of the captain yearning for death yet also his defiant rage at his fate, at one point covering this enormous emotional range all within the second syllable of the word “gewann.’’ The orchestra pulsed and surged beneath him, becoming, as Wagner intended, a kind of stormy subliminal reflection of the character’s own inner world. As an encore, Terfel sang with a glowing lyricism, the “Song to the Evening Star’’ from “Tannhäuser.’’

All told, as Saturday night’s performance and its reception made clear, Levine is energized and the musicians and BSO audiences are glad to have him back. If he can stay healthy, there could be some exceptional music-making in store this fall. The subscription season begins this week, with Levine-led performances of Mahler’s Second Symphony.