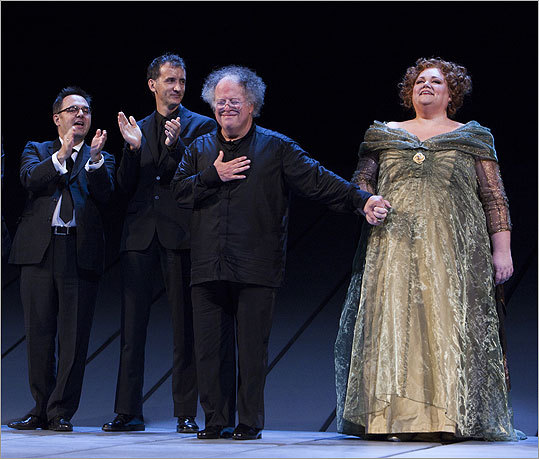 (Sara Krulwich/The New York Times) James Levine (center) took a bow at the end of the performance of the opera "Das Rheingold" at the Metropolitan Opera in New York City on Monday.
By Jeremy Eichler Globe Staff / September 29, 2010

NEW YORK — The Metropolitan Opera unveiled a major new staging of Wagner’s “Das Rheingold’’ on Monday night, yet before a single note was played the audience rose to its feet to give James Levine an extended welcome-back ovation. The music director of both the Met and the Boston Symphony Orchestra has been out on a prolonged medical leave recovering from back surgery last April. In his bows at the end of the night, he looked trimmer than when last seen in Boston and walked gingerly with support from one of the opera’s stars. He was clearly thrilled to be back before a live audience. He returns to Symphony Hall this week to lead the BSO in its Saturday night season-opener.

The new baseline for Levine’s health won’t become clear for at least several weeks, once he has ventured further into a frighteningly busy fall schedule. But at least on Monday night, while his physical recovery seemed a work in progress, his musical intensity appeared at full force, judging by the viscerally charged, supplely paced, luxuriously detailed performance he drew from the Met orchestra and a stellar cast headed by Bryn Terfel as Wotan.

Of course, the other big story of the night was the premiere of Robert Lepage’s technologically virtuosic production, the first in the “Ring’’ cycle that the Met will be unveiling in the coming seasons. Anticipation has run extremely high for the Lepage “Ring,’’ which general manager Peter Gelb has called “the most complicated and challenging’’ production ever attempted at the Met.

Those expecting futuristic shock and awe on Monday night, however, may have been surprised by the look and feel of Lepage’s work. The stage is dominated by a giant system of 24 suspended rotating planks, and some magical coups de theatre are accomplished by projections (onto the planks) of scenery images which move in response to the singers’ movements.

But fundamentally this is a high-tech “Ring’’ with a very traditional heart. Costumes and props unmistakably reference Wagnerian productions of yore, with their breastplates, staffs, and spears. The texture of the singers’ interaction, often at the very front of on the stage, is also quite conventional, a world away from the avant-garde, neo-Brechtian “Ring’’ that was recently mounted in Los Angeles.

When Wagner himself built a theater for his operas at Bayreuth, he embraced some extremely novel and inventive stage technology, and the Met’s template for an old-new “Ring,’’ as it is worked out in the remaining three operas of the cycle, could ultimately claim that elusive middle ground that satisfies both traditionalist “Ring’’ fans and those craving theatrical innovation.

But I also must confess that despite all the hype, I found this “Das Rheingold’’ production was missing something important. Lepage’s stage could send performers climbing across walls and flying through the air, but it was less successful at drawing a listener into the searing human drama that plays out in these domains of gods and dwarfs. When the stage comes alive with moving projections, as with the opening underwater Rhinemaiden sequence, the effect is visually stunning. Yet for long stretches, while Lepage as stagecraft wizard is sitting on his wand, presumably out of respect for the music, the system of planks looms austerely in a chilly gray. It dwarfs the singers, and at various points gives them a steep incline to make what became unintentionally comical entrances and exits. (The planned final ascension of the gods toward Valhalla was foiled by a technical malfunction.) Overall, I’m not sure I have ever attended a production of any opera that made me think so much about the scenery.

Still, whenever the mind drifted to thoughts of stage hydraulics and whirring backstage computers, there was strong singing and brilliant orchestral playing to snap one back to attention. “Das Rheingold’’ opens with an almost primordially rumbling chord that Wagner builds up from the misty depths of the orchestra, sustaining it for a small eternity as more and more instruments join in. The music ripples and finally surges upward, a kind of mystical coming into being of the orchestra itself, or in more grandiose Wagnerian terms, the creation of the universe of the “Ring.’’ It’s a complete cosmology in E-flat major.

Levine navigated this prelude with a deft hand and the Met Orchestra crested powerfully into the underwater song of Rhinemaiden. They are soon met by Alberich the dwarf, who himself becomes a fearsome character in Eric Owens’s vocally and dramatically commanding performance. Terfel was a darkly forceful Wotan, and Stephanie Blythe sang with great dignity and pathos as Fricka. There wasn’t a weak link in the cast, which also included Wendy Bryn Harmer as Freia, Gerhard Siegel as Mime, and Richard Croft as the fire god Loge.

The full run of “Das Rheingold’’ is sold out, but thanks to the Met’s simulcast series, the work is coming on Oct. 9 to a movie theater near you. It should be fascinating to see how this “Ring’’ cycle develops, and whether Lepage can find a way to articulate a space that not only dazzles the eye but also projects the music and the drama to a place they must reach in all great opera, somewhere far beyond special effects.

View photos from the show.

At: the Metropolitan Opera, Monday (runs through April 2)